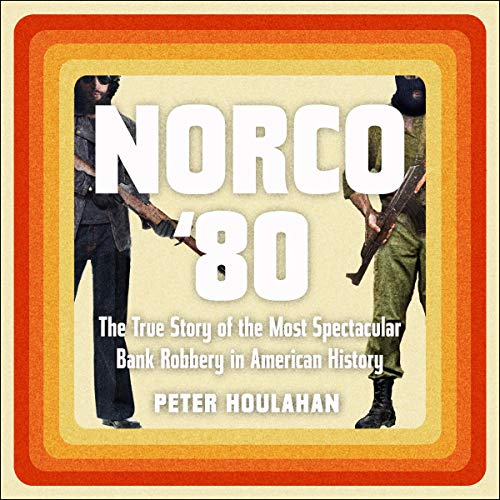 By: Peter Houlahan
Narrated by: Joe Barrett
Try for £0.00

In the spirit of Killers of the Flower Moon and The Onion Field, Norco '80 is a gripping true crime account of one of the most violent bank heists in US history.

Norco '80 tells the story of how five heavily armed young men - led by an apocalyptic born-again Christian - attempted a bank robbery that turned into one of the most violent criminal events in US history, forever changing the face of American law enforcement. Part action thriller and part courtroom drama, Norco '80 transports the listener back to the Southern California of the 1970s, an era of predatory evangelical gurus, doomsday predictions, megachurches, and soaring crime rates, with the threat of nuclear obliteration looming over it all.

A group of landscapers transforms into a murderous gang of bank robbers armed to the teeth with military-grade weapons. Their desperate getaway turned the surrounding towns into war zones. When it was over, three were dead and close to 20 wounded; a police helicopter was forced down from the sky, and 32 police vehicles were destroyed by thousands of rounds of ammo. The resulting trial shook the community to the core, raising many issues that continue to face society today: from the epidemic of post-traumatic stress disorder within law enforcement to religious extremism and the militarization of local police forces.

What listeners say about Norco '80

not a riveting thriller but an interesting story

not really a spectacular story and it dragged a bit , lots of background info and police stuff, almost like a dull history book

Great story, but read by someone who sounds like a nice grandpa reading a book on fly fishing.

I’ve tried several times to listen to this but am now just giving up and going to read the physical book instead. .

I grew up hearing the store for my father who was shot in this robbery and the way the author tells the story kept me on the edge of my seat the whole time. I enjoy the history and research that went into this and I'm very appreciative. it does all those who were involved Justice.

This is an amazing engrossing listen, even if you usually do not listen to non-fiction or true crime this is a must have for your summer audible library . Houlahan has certainly painted a suspenseful picture with extensive research and deft expertise spun this story into a wonderful listen. It is hard to stop listening when the action begins and with great back stories you are pulled in immediately. The reader does an excellent job, even if you think you might not like the reader at first, do not pass on this book-he is a master at telling this story,

This book in theory isn't bad per say. It's an interesting story. But cutting it in half, at least would make it much easier to listen to. It drags on and on and is extremely repetitive. And the court proceeding moment by moment accounts are just unnecessary. You have a very misguided group of kids, following a kind of Jim Jones like cult of faux Christianity who somehow get caught in this mess. It's a tragic story in so many ways. So many lives were destroyed here. And another narrator besides Joe Barrett would be good. I normally like Joe Barrett, but for some reason he was hard to listen to here.

A lot more than just a robbery

It's a long and multi-faceted story, about religious zealots, a robbery, dysfunctional law enforcement, an unethical judicial system, and ultimately, and perhaps most notably, the militarization of police forces. There is a tragic symmetry in the connection of religion to out-of-control law enforcement.

Though I'm not sure exactly how it's in the spirit of Killers of the Flower Moon (a much better story, in my opinion), it does give a fairly comprehensive view of the entire episode, and keeps the listener interested. Flaws in law enforcement are related in detail, namely racial insensitivity within their ranks, a lack of technological vision, and communications breakdowns. However, it is clearly sympathetic (at times uncomfortably fawning) towards police as individuals. which seems to be perhaps the result of an overly credulous storyteller. In any case, it doesn't distract from book, but merely serves as context for the listener to decide what, and whom, to take at face value.

This book is so absorbing and detailed, I listened to it twice to make sure I didn’t miss a word. Author Houlahan tells the story of the Norco 1980 bank heist from every angle. The listener gets to know every person involved and why they did what they did. This bank robbery had lasting consequences for police forces across the U.S. Its a must-read for anyone interested in history, crime, survival culture or organized religion.

i read a lot of narrative history and have fairly high standards. the work the author put into both his research and writing is obvious and makes for an enjoyable and informative read
you should read the whole book...but the prologue alone...with its scope of the social and religious tones of the 1970s in America is worth the price if the book

This would have made a good magazine article but it was incredibly stretched as a book. There just isn't enough story there to support a book of this length, and it drags on.

Very interesting subject matter but they stretched it out so much it made it hard to make it through. I bailed w >3hrs left and couldn't possibly imagine how he'd drag the story out any further when I'd lost interest hours ago. I assume I was a few minutes away from the author's fantasy involving a retired police officer washing his car, etc.

If the book had a good editor it'd have been that great balance of non-fiction and true crime I love. Unfortunately it read like a 5th graders essay w a minimum word count or maybe the author was being paid by the word?

Jim Clemente's recent Audible stuff is an example of what this book was trying to do. Clemente's stuff is the best true crime audiobooks available. Legit, Fo realz.

The book was very well researched, but I found the myriad names and places tedious at times.

I just finished this 13 hours book in two days. So compelling I’m going to listen again as soon as possible.