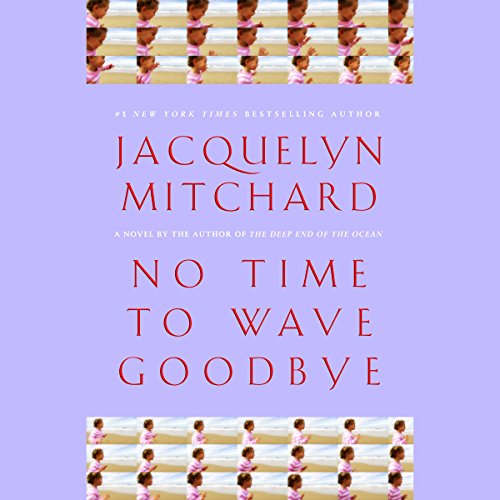 No Time to Wave Goodbye

By: Jacquelyn Mitchard
Narrated by: Susan Denaker
Try for £0.00

New York Times best-selling author Jacquelyn Mitchard captured the heart of a nation with The Deep End of the Ocean, her celebrated debut novel about mother Beth Cappadora, a child kidnapped, a family in crisis. Now, in No Time to Wave Goodbye, the unforgettable Cappadoras are in peril once again, forced to confront an unimaginable evil.

It has been 22 years since Beth Cappadora's three-year-old son Ben was abducted. By some miracle, he returned nine years later, and the family began to pick up the pieces of their lives. But their peace has always been fragile: Ben returned from the deep end as another child and has never felt entirely at ease with the family he was born into. Now the Cappadora children are grown: Ben is married with a baby girl, Kerry is studying to be an opera singer, and Vincent has emerged from his troubled adolescence as a fledgling filmmaker.

The subject of Vincent's new documentary, "No Time to Wave Goodbye," shakes Vincent's unsuspecting family to the core; it focuses on five families caught in the tortuous web of never knowing the fate of their abducted children. Though Beth tries to stave off the torrent of buried emotions, she is left wondering if she and her family are fated to relive the past forever.

The film earns tremendous acclaim, but just as the Cappadoras are about to celebrate the culmination of Vincent's artistic success, what Beth fears the most occurs, and the Cappadoras are cast back into the past, revisiting the worst moment of their lives - with only hours to find the truth that can save a life. High in a rugged California mountain range, their rescue becomes a desperate struggle for survival.

No Time to Wave Goodbye is Jacquelyn Mitchard at her best, a spellbinding novel about family loyalty, and love pushed to the limits of endurance.

What listeners say about No Time to Wave Goodbye

This is the sequel to the Deep End of the Ocean. I had a hard time staying engaged while listening to it. The story is somewhat slow.

horrible to listen to, want my credit back

This reader was monotone and slow, I could not listen to more than 5 min. and it was 5 min of torture. want my credit back!!!

Book was not bad, for a sequel. However, the narration, particularly the New Jersey accent of VIncent was terrible. It actually ruined the book for me.

Iffy book from a wonderful author

I read most of "Deep End OF the Ocean" holding my breath. This was an astounding book, deep, and beautiful and frightning in its scope. I was very excited to find a follow up book by the same author. I took it with me on a 5 day cruise.
J. Michard is a fantastic author, I have enjoyed most of her books. This book bored me for the first half. I plodded along trying to finish the first 4 hours, thinking it has to get better. Around the mid-mark there was a twist, I don't want to spoil it for you. This is when the author went over the top, and lost touch with reality. Many of the details were inconsistant, with information earlier in the book. I found it unrealistic, and candy sweet. So sweet it set my teeth on edge. I hated the narrators male voices, all gravely and difficult to listen to. I will make sure I don't get any more books narrated by her. But I will read Ms Michards next book, in print, from the library.