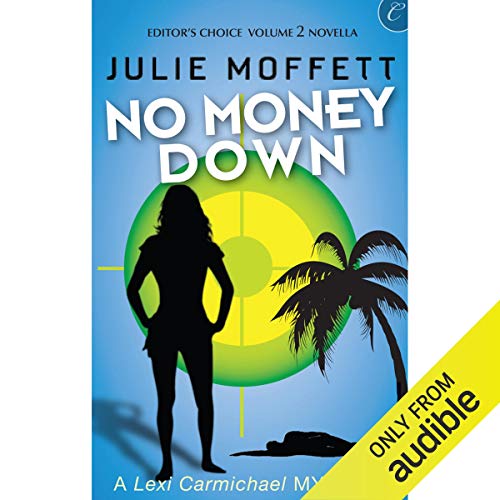 Me and the legendary Zimmerman twins - it's a friendship made in geek heaven. And it all started back when I worked for the NSA... My best friend Basia dragged me to the beach for her idea of a vacation. All those annoying people, sand in embarrassing places - not exactly R & R for a girl who doesn't like the sun, the ocean, or bathing suits. I couldn't wait to get back to work. But things started looking up when I ran into Elvis and Xavier Zimmerman. We discovered we had a lot in common: gaming, anchovies, hacking. After that, the vacation was perfect - until I accidentally broke some poor guy's fingers. Then Broken-Fingered Guy disappeared, and things got really dicey. With the Secret Service and a bunch of thugs suddenly after me, all I wanted was to solve the mystery and enjoy what was left of my vacation - preferably alive.

What listeners say about No Money Down

Julie Moffett has outdone herself again

Would you consider the audio edition of No Money Down to be better than the print version?

I never read the print copy.

Yes, with the interaction between characters. Especially with the pouch that the guy left with Lexi. At first, I thought Basia had found a bomb, but then it was counterfeit money. When Lexi passed out, I thought the bomb had gone off and had knocked her out. I didn't know that she'd been injected with microchips. The entire listen (read) was a great success.

Which character – as performed by Kristin Watson Heintz – was your favorite?

Lexi, of course. And then Basia.

Julie Moffett has outdone herself again with another Lexi Carmichael Mystery. I love the fact that Lexi is a down-to-earth kind of girl and not some overzealous beauty queen. She is unpretentious and open to the point of hilarity. I will always love these books because the character (Lexi) makes it possible.

I love the Zimmerman twins so got me this was a great story. The narrator was excellent.

Lexi Is the Best Girl Geek

I love Lexi Carmichael and her geek adventures. This is a short novella that appears between book 1 and 2. This is where she first meets up with the identical geek twins Elvis and Xavier. It is fast paced and enjoyable. Basia comes across as a bit naive but the story is good and nice to explain how the geek friendship occurs. All of these books about Lexi are terrific.