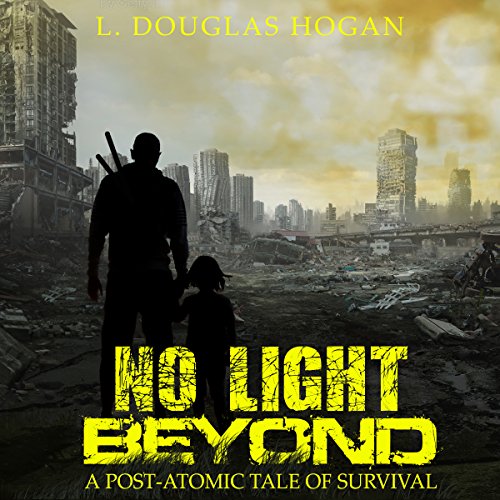 By: L. Douglas Hogan
Narrated by: Chelsea Stephens
Try for £0.00

Mason Loss was a single father separated from his seven-year-old daughter, Lydia Nicole, when the United States was suddenly devastated by several massive coordinated EMP attacks.

Having sustained life-threatening injuries in his search for her, he awakens from a two-year coma to find that the world is not the way he left it. To make the situation worse, Yellowstone has erupted and expelled an ancient microscopic organism that threatens the course of human survival.

Now, Mason must traverse the ashy suburban landscape in search of his now nine-year-old daughter. Along the way, he discovers a far more terrifying enemy than humankind can safely manage.

What listeners say about No Light Beyond

I liked the story with it's mix of post apocalyptic, dystopian and zompoc. It had several stories within stories, which made it an interesting listen, however I found the narration a difficult listen. There were several errors where lines were repeated and it just didn't flow with the narrator trying to create too many character voices, especially the "journal writing voice" which was in my opinion just uncomfortable.

A story for Trumpland

Would you listen to No Light Beyond again? Why?

No once is enough.

What other book might you compare No Light Beyond to and why?

No other it is unique nothing can compare to the dark nature of the story.

What does Chelsea Stephens bring to the story that you wouldn’t experience if you just read the book?

She amplifies the emotion of the various charactors.

The start of this book feels like I wandered into a sequel and was getting a summary of book one. I had to double check that there wasn't a prior book. The writing is choppy and full of clichéd statements, and the plot line jumps around in fits and starts with detail in some places and then a summarization in others. The characters don't necessarily act in ways that I would think someone would act two years into a collapse situation. There areto many convenient plot twists that don't add to the realism of the book. Having an EMP, Yellowstone blowing and zombies is a bit of overkill as well. There may be a sequel to this book, but I won't bother.
The narrator isn't particularly effective either and struggles with the choppy writing and plot. Using a female voice for primarily male characters is distracting and not a good foray into audiobooks.
I was given this free audiobook at my request and have voluntarily left this review.

I must admit that the author have surprised me with this creation, it is very well written and so much different from all the boring zombies stories that popped up every where.
A really good book and an excellent performance.
Once you start with this book it's almost impossible to take brakes, you just can't wait to see what's going to happen next all the way to the end.

Survival of a multitude of catastrophes

A great mix of characters that are unlike the authors other books but shared the same thread of good people doing the right things for the right reasons.

It may be the end of the world.An emp and a volcano spewing lava and toxins hits the earth.A man gets to his house in time to see hid daughter abducted.He finds her and loses her many times,but he always tries again.A disease spreads throg the population turining people into monsters.The way is fraught with danger and terror.Chelsea Stephens narrates it nocely.I was given this book by the narrator,author or publisher free for an honest review.

Brutal hunt for a mans daughters in a mad world.

Story: It is fast paced and the world starts with all kinds of crap going on. The author finds a way for me to care for them early on and become invested in the characters quickly. Has a few twists.

Writing: Structure was fine and was not taken out of the story with anything awkward.

Narrator: She has so far been one of my favorites. A couple male chatacters did not work but the main ones were fine and she was pleasant to listen too.

I received this book for free in exchange for an voluntary unbiased review.

Fun book. I reccommend it. Especially if a fan of apocolyptic books.

It was almost perfect... almost. I could have done without the zombies' aspect of the book. That made it unrealistic and this book did not need that sensationalism to make it successful. In fact for me it detracted from its value as a "believable" tale. Until then this book reminded me of "The Road" by Cormac McCarthy, a true masterpiece in the genre. The undeads however were just a little over the top. That said, it is still a great book and very well written and narrated and at times has strong emotional and poignant moments. The main character can be a little too violent when not necessarily needed but because of the extenuating circumstances this extreme reaction can be understood. The ending is a little abrupt and possibly an opening for a sequel. There are a lot of unanswered aspects of the storyline that make me think that a part 2 is in the works. A good job all in all.

The story was ok, a little watered down Walking Dead. Basically Mason wakes up after 2 years in a coma and searches for his daughter who was kidnapped when the world went to ruin. Rival gangs plunder and traffic everything and a new outbreak turns the dead undead. Not sure if this will be a series but it is left wide open. It would be nice to get an ending and although it wasn’t my favorite I’d listen to see what happens. The narrator was fabulous though! I received a free review copy of this book at my request and have voluntarily left this review.

good for a first book

I found the book entertaining mostly. but with alot of faults. the diary/journal Mason was writing to his daughter should NOT have included " I kissed shamika(I have no idea how to spell her name) and I liked it" like a Katy Perry song. I found the book otherwise pretty okay.

I would probably not continue with the series. I didn't like the characters names. and Mason was 2 dimensional. and the "love story" was instalove which I'm not a fan of.

I had high hopes for this one. The idea of the story sounded great. But the execution was poor. The story jumps around so much it’s jarring and hard to follow. The characters are unrealistic imo. The narration was only ok, which didn’t help.