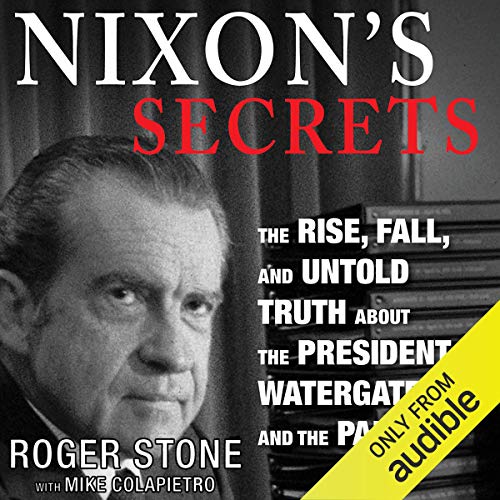 By: Roger Stone,Mike Colapietro
Narrated by: Stephen Hoye
Try for £0.00

Learn the inside scoop on Watergate, the Ford Pardon, and the 18-minute Gap. Roger Stone, The New York Times best-selling author of The Man Who Killed Kennedy: The Case Against LBJ, gives the inside scoop on Nixon’s rise and fall in Watergate in his new book Nixon’s Secrets. Stone charts Nixon’s rise from election to Congress in 1946 to his stinging defeats that preceded the greatest comeback in American Presidential history.

"Just as the assassination of JFK prevents a balanced analysis of Kennedy and his times, the myth of Watergate prevents a reappraisal of our 37th President,” said Stone, who’s book on LBJ was the second biggest selling book during the 50th anniversary of Kennedy’s murder.

Stone reveals how the Kennedy’s wiretapped Nixon’s hotel room the night before the Nixon-Kennedy debate, and stole Nixon's medical records from his psychiatrist’s office. Stone lays out how Kennedy's running mate Lyndon Johnson stole Texas from JFK through vote fraud while Mayor Richard Daley stole Illinois, and how JFK actually lost the popular vote. Stone looks at the Nixon Presidency: the desegregation of the public schools, the progressive social programs, Nixon's struggle to end the war in Vietnam, the historic SALT arms reduction agreement with Russia, the saving of Israel in the Six Days War, the opening to China, and the disastrous decision to take America off the gold standard.

"The mainstream media’s interpretation of the facts surrounding the Watergate episode are a fantastic and grotesque distortion of historical truth,” said Stone. "Cursory examination of the facts in Watergate will reveal that the actions that caused the fall of Nixon cannot be reduced to the simplistic account summarized by Bob Woodward and Carl Bernstein of the Washington Post.”

What listeners say about Nixon's Secrets

Is a computer reading this ?

Interesting book by Stone , the reading however sounds like it’s being done by a computer with emphasis on words in a bizarre manner , spoils the whole thing . If it’s not a computer then I don’t know what to say .....

read by a robot

Narration turned me off within the first few pages.

Otherwise a good book, by someone who knows

Another great book by Roger Stone with history and cross overs between political families and rivals.

Not the man you thought you knew

Would you listen to Nixon's Secrets again? Why?

Yes in fact I did

What other book might you compare Nixon's Secrets to, and why?

Which character – as performed by Stephen Hoye – was your favourite?

Would you try another book from Roger Stone and Mike Colapietro and/or Stephen Hoye?

Probably not, if I did I would pay careful attention to reviews before buying.

Would you ever listen to anything by Roger Stone and Mike Colapietro again?

Maybe, but not my first choice.

What does Stephen Hoye bring to the story that you wouldn’t experience if you just read the book?

The reading was pretty good; however, whether due to writing or narration, it was often difficult to determine when the first person quotes (the longer ones) were attributed to the author or to another source the author was citing.

It's unorganized. Assumes event knowledge in the reader that someone my age (mid-40s) might not have.

This book was very well written and presented a fair view of President Nixon. It didn't quite elaborate enough on the speculation that lead to watergate in my opinion. I would have liked a little more. The worst part of the book is it is very repetitive. It jumps from 1960 to 1968 back to 1956 over and over again.

Tells the truth about Nixon..

gave alot of insight to the political climate of the era. a good listen. enjoy!

The Untold Truth About Nixon.

Most compelling is how Nixon negotiated his pardon by threatening to reveal the cover up the Warren Commission investigation for the JFK assassination.

loved it, learned alot from this book. The varies political figures discussed here is eye opening. Great source of information about our nation.

US Politics is a very rough game

This book answered a lot of questions for me. It was also very frightening. It was also very believable. Every American should read this. Then quit whining and get involved with our flawed democratic process. We would be a much better country for it. I had to constantly remind myself that it was about how he became the most powerful man on earth.

Excellent and thank you!

With most stories about Nixon coming from a partisan angle, I appreciate learning history from the angle of someone who was there, and didn't have a political axe to grind.

not as good as his books on Clinton and Kennedy. got boring about half way through

Stone does it again.

Excellent. Sorry to see it end. Terrific study of a unusual giant. Shows the unreasonable power of the corrupt left wing media, a preview to today’s “ fake news”.

OVERALL - Let me start by stating that I am a fan of both Roger Stone and the accomplishments of Richard Nixon before his largely self-inflicted fall from grace. The book succeeds because Stone is open and honest about Nixon as leader and as a man. Unfortunately, no one could listen to the entire book and not be critical of the 'mail it in' style of writing used throughout it. The kindest thing I can say about it is that Stone or his co-author Mike Colapietro must have thought they were being paid by the word. It was that repetitive. It is as if articles or diary entries were cobbled together with little cohesion to create this book. Had it been structured better, this book would easily be a five star review.

STORY - Great story with great insight as to Stone's personal relationship with Nixon as well as a retelling of the highs and lows of the former President's life. There is plenty of red meat for those who enjoy Stone's insight and often attacks on other political figures (JFK, LBJ, the Bush's, et al), but the story really does come down to how well Nixon is analyzed as both a strong leader and a deeply flawed human. Stone deserves much credit for his balanced look at the man.

NARRATION - Stephen Hoye does an acceptable job with his narration. Nothing about his delivery stands out yet nothing detracts from the story. Just the way it should be.