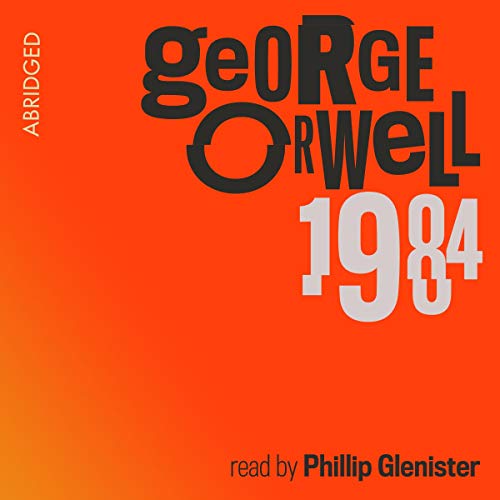 By: George Orwell
Narrated by: Philip Glenister
Try for £0.00

Nineteen Eighty-Four is a classic dystopian novel by English author George Orwell. Published in 1949, it is set in the eponymous year and focuses on a repressive, totalitarian regime. Read by gritty and accomplished actor Philip Glenister from the acclaimed crime series Life on Mars and Ashes to Ashes. The story follows the life of one seemingly insignificant man, Winston Smith, a civil servant assigned the task of falsifying records and political literature, thus effectively perpetuating propaganda, who grows disillusioned with his meagre existence and so begins an ultimately futile rebellion against the system.

The novel has become famous for its portrayal of surveillance and society's increasing encroachment on the rights of the individual. Since its publication, the terms Big Brother and Orwellian have entered the popular vernacular. This is a special celebratory release to celebrate 60 years since Nineteen Eighty-Four was first published.

What listeners say about Nineteen Eighty-Four

It's some years since I read 1984 and the surprise about this novel is how it has retained its relevance since it's first publication. It is as applicable to modern society as it was when first written. 1984 is not a light listen. It's a thought provoking tale of manipulative social engineering and the loss of both freedom of speech and thought.

Philip Glennister's narration is first class. In particular, his soft Irish O'Brien brought the character alive for me. I doubt that his reading of this classic novel can be surpassed.

The only negative, in my opinion, is the classical music that plays inbetween chapters. I like classical music and I like audio books but not combined! I found it irksome and didn't appreciate the interruption to the flow of the narration.
Although it was not to my taste, it was not enough to spoil the enjoyment of the superb reading and interpretation of the words of Orwell delivered by Glennister.

1984 is a horrifying tale and not easily forgotten. Philip?s perfect narration brings the story to life and keeps you hanging in until the end.

This story is akin to the dystopia love story of a Hand Maid’s Tale but I found 1984 to be better. It was better because it delved into the other areas of the context/setting a bit more.

I learned more about human nature in 1984 and there were meaningful concepts in it that I will remember for life, eg, Child Hero & 2 minutes of hate.

Chapter 4 was my favourite chapter. He reads the forbidden book in this chapter and the concepts in that book are patently relevant in 2020 as they clearly were when Orwell wrote this book.

Overall I enjoyed the book and the voice reading it. I became lost in its world from time to time.

supposed to be a warning of the future but seems to have turned into a guidebook.

Nice recording of an important classic

I have read this book 4 times, once a decade. It remains my favourite and unfortunately every reading reminds me how we keep on sleepwalking into distopia. Just the last decade has brought us entertainment devices that listen to us and advances in AI. I was nervous about trusting it to an audiobook reader but it was a very solid reading. I will be listening again.

Nineteen Eighty Four is one of the best novels I have listened to. Throughly thought provoking and really draws you into Winstone Pov and the crap sack world he lives in. The story is a bit short and makes you crave more wanting to know what comes next. I highly recommend it.

A classic story and all to pertinent subject matter in recent times!! Everyone should read/listen to this story at least once in their lives!! Very well told by Phillip Glenister!!

Scarily accurate of what's happening in the world

Narrator excellent. I found it slow to start but there was a lot to get my head around before the story developed late chapter 3 and then I began to really get into the story and relate it to what's happening in the world today. Think Alexa, smart television, PC - villified for having an opinion, Europe, impression, poverty, need I go on. Recommended read for everyone.

A really scarey book. so much of it is happening today. New speak is now legally enforced in the UK

The narrating of this masterpiece is absolutely amazing. The changes in voice for different characters brought it alive. People say that the little interludes of classical music was disconcerning, but I reckon that it made it seem ever more realistic. The tracks fitted perfectly with the story and flowed brilliantly.
A+. A must read. And a wonderful audiobook.

Beyond brilliant - a true visionary.

The only mistake Orwell makes is in being a bit premature with his predictions. A riveting story that could so easily come to be if we are not careful. A must read as is his Animal Farm as well.