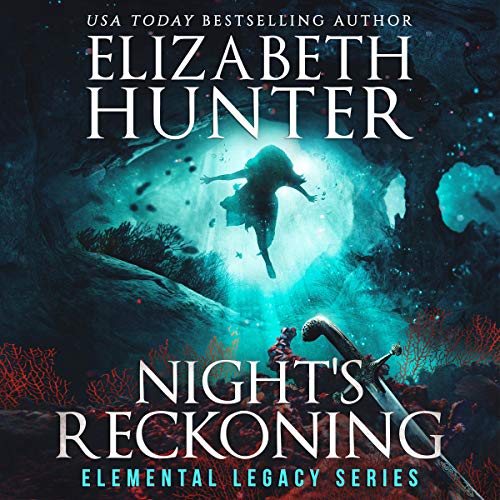 By: Elizabeth Hunter
Narrated by: Sean William Doyle
Try for £0.00

Pulse-driving paranormal mystery from USA Today best seller, Elizabeth Hunter. Darkness comes for everyone, and some fates are inescapable.

For over a thousand years, the legendary sword Laylat al Hisab - the Night's Reckoning - has been lost in the waters of the East China Sea. Forged as a peace offering between two ancient vampires, the sword has eluded treasure hunters, human and immortal alike.

But in time, even the deep gives up its secrets.

When Tenzin's sire hears about the ninth century shipwreck found off the coast of southern China, Zhang Guo realizes he'll need the help of an upstart pirate from Shanghai to retrieve it. And since that pirate has no desire to be in the middle of an ancient war, Cheng calls the only allies who might be able to help him avoid it.

Unfortunately, Tenzin is on one side of the globe and Ben is on the other.

Tenzin knows she'll need Ben's keen mind and political skills to complete the job. She also knows gaining Ben's cooperation won't be an easy task. She'll have to drag him back into the darkness he's been avoiding.

Whether Ben knows it or not, his fate is balanced on the edge of a thousand-year-old blade, and one stumble could break everything Tenzin has worked toward.

Night's Reckoning is the third novel in the Elemental Legacy series, a paranormal mystery by Elizabeth Hunter, USA Today best-selling author of the Elemental Mysteries.

What listeners say about Night's Reckoning

I am so in love with these characters.
Fantastic story and fabulous narration.
Will definitely be listening again!!

THIS IS VERY EXCITING. MANY SURPRISES AND UNEXPECTED MOMENTS. LOVE THIS SERIES AND CAN'T WAIT FOR NEXT AUDIBLE! SEAN WILLIAM DOYLE IS AWESOME!!

Oh my, oh my! I often wondered if, how, when Ben’s life would change! Did not see the reality coming. So very much looking forward to the next Tenzin & Ben novel. The narrator did a fantastic job!

Elizabeth Hunter is a literary force. I live her stories and characters. I feel like they are my friends.

Loved all of it. Storyline, character development and next installment hope. Hunter continues to hold my interest.

Well, here I am with the next adventure of one of my favorite couples who do not think they are a couple. These characters have grown so much since they were first introduced into the series. While one is a vampire who has lived a very long life, she has managed to make strides in how she interacts with humans. The human side of the duo has literally grown since he was a child when brought into the world that he inhabits and has continued to evolve as he has grown to adulthood.

The legendary Laylat al Hisab also known as the Night's Reckoning has been lost in the East China Sea for thousands of years. It was created as a peace offering from Arosh to Zhang which has managed to elude treasure hunters both human and immortal all this time.

When Tenzin's sire hears that a ninth-century shipwreck has been located which is the possible holder of Night's Reckoning he realizes that he will need help if he hopes to recover it. Though Ben and Tenzin are on opposite sides of the world, Tenzin knows that she will need his help. Gaining his cooperation is not going to be easy since Ben has said that he wants a break because Tenzin once again ran away. Ben has avoided the dark places lately and Tenzin is going to drag him back in.

The banter between the characters whether it is serious or lighthearted is always a fun thing for me. There are a few instances of names being mixed up and confusing who is talking or who is being spoken to. Overall though this is another great entry and I know the next one will be just as good or better.

This is by far one of my favorite books I have ever read or listened to! The emotions it brings forth are both devastating and unbelievably grateful. I had read this before but listening to it made it even more intense!! I cried .. I grinned.. I gasped (even knowing what was coming). You get the whole range of emotions with this one and it is definitely one you don’t want to miss! I do recommend doing the series in order though.

can't wait for the next one .. omg!!! think I'm gonna listen again ... Sean William Doyle must be the only narrator for this series ... he was perfect!!!