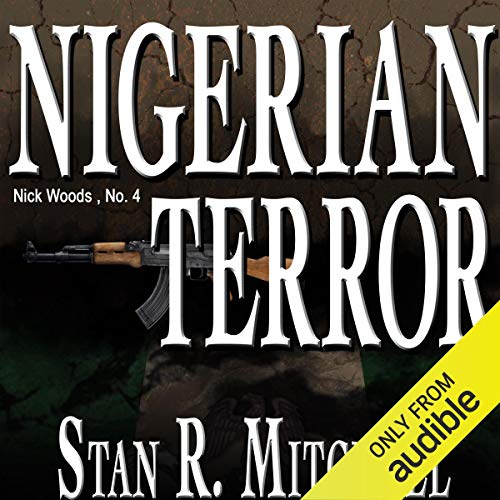 Nick Woods and his elite band of shooters from Shield, Safeguard, and Shelter (S3) deploy to Africa on their next mission to deal with an out-of-control terrorist group that now holds more than 20,000 square miles of land.

This terrorist group, called the Boko Haram, has finally gotten the attention of America's leaders. Its tactics of abducting children and ruthlessly expanding its territory pose a threat to Nigeria and the countries surrounding it.

But when S3 stumbles upon a dangerous plot by Boko Haram's leader, their daunting task transforms into a terrifying matter of national security. S3 must change its focus immediately to tracking down four lethal weapons in an all-out race against time.

What listeners say about Nigerian Terror

I wish the author would've killed off the main characters of the series would come to a close. This is the last book I listen to from the author.

Not nearly as good as previous books.

Three were far too many inconsistencies, plot holes and gloss overs. The entire story seemed rushed.

Story was predictable and lacked any depth. Would not recommend.

Read like a B movie... Predictable and no depth

Hardly a terror. just cliche. nothing more than one liners, shallow charters and irrelevant details...

Not the best of the series.

This was a series that started out great but with each episode had lacked more and more depth. Hope it picks up again because I really liked it in the beginning.

Packed full of action, and doing the right thing despite orders, this book seemed short to me, but Nick got the job done. It was believable in that Nick didn't come through with his hair in place. In fact, he got thoroughly trounced but still won through with the help of his friends. And that leads to some introspection and contemplation on the meaning of life. It keeps Nick human.

Jay Snyder does a good job with all the voices and accents. No complaints there.

My complaint is that Americans have gotten so sensitive to being politically correct, that they are wrong sometimes. The case in point here is that the author calls the NIGERIAN bad guy an African-American because he doesn't want to use the wrong words and say he was a big Black man. (I've heard Americans call British Blacks African-American.) An editor should have called this one out.

The series is pretty good, and I will continue as long as Mr. Mitchell keeps 'em coming.

This book was not as thrilling as Mexican Heat. I loved Jay Snyder's performance. he was the reason I purchased the Book. he is extremely talented.

This book was really interesting and I had a good time reading it! There is plenty of action, some armed forces politics and great soldier characters.

Still good but doesn’t create a sense of danger