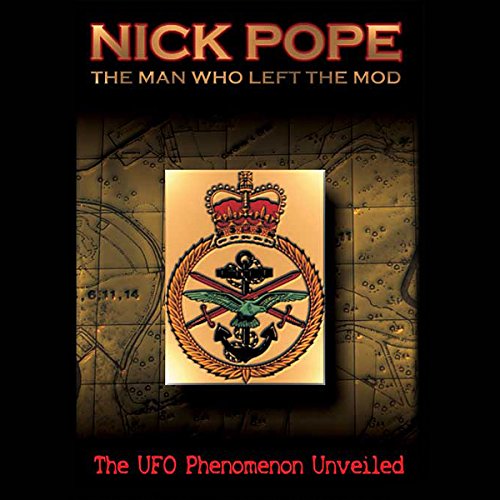 By: Nick Pope
Narrated by: Michael Bourne
Try for £0.00

Nick Pope worked for the British Ministry of Defense (the MOD) for 21 years. He became known as the Fox Mulder of Great Britain due to his "special position" as the chief UFO investigator.

He has written four highly successful books on UFOs and has appeared on television and radio all over the world. In fact, Nick Pope is probably one of the best-known UFO investigators on the planet. And yet, he is the only official UFO investigator employed by the British government to ever go on record.

In this interview, conducted by Michael Bourne, Nick Pope (for the first time since leaving the MOD) goes on the record and spells out his beliefs and opinions, and reveals the scope of his incredible insider knowledge.

What listeners say about Nick Pope

This audio book would have been better served without the backing music, in what is obviously a very interesting subject. Nick explains his take on the U.F.O phenominum from the point of view of a government official who has studied the subject.
No real conclusions are drawn except the obvious, which is that the U.f.O.s are seen and if you discount kranks and the suchlike definately exist.
All in all I enjoyed this,an if, at times amateurish recording, one had the feeling that it was done with a tape recorder over a light lunch, and a music soundtrack was added afterwards.

Some juicy stuff but a little short for one credit / I would have bought it if I’d realised.

Would you try another book from Nick Pope and/or Michael Bourne?

This isn't an audio book, it's an interview with Pope and a very poorly recorded one at that.
Difficult to hear, the interviewer is completely inaudible and Nick Pope though informative is merely answering the questions you can't hear being asked. Do not waste your money.

Who would you have cast as narrator instead of Michael Bourne?

Michael Bourne was not narrating, he was interviewing.

Do you think Nick Pope needs a follow-up book? Why or why not?

Nick Pope should write and perhaps read his own book.