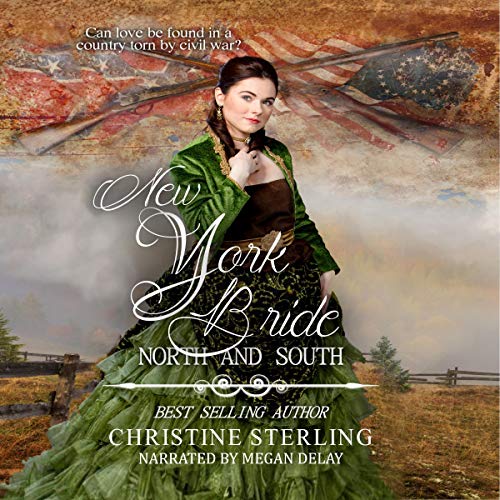 Shay O’Donnell traveled across the Atlantic to escape the famine and poverty in Ireland. Sold into servitude by her father, she has little chance for freedom or marriage in the new land. She never expected a stolen kiss could turn her entire life upside down and give her hope for the future.

Macalister Wardsworth is conducting business for his father’s company when he encounters a beautiful Irish woman on the other side of the Atlantic. After weeks of stolen kisses and daydreams, Mac envisions his future with her. But when the ship arrives in New York on the precipice of war, their dreams become nightmares.

Can Mac and Shay find each other again? When Mac discovers Shay’s secret, how will he react, knowing he holds her future in his very hands? Will Shay become Mac’s New York Bride?

This is book three in a 37-book series written by multiple authors. The books are published in chronological order, telling one story in each state or territory during the war. The stories reflect each year over the four years of the Civil War. It is a sweet and wholesome romance set against one of the bloodiest wars in the United States.

Scroll up and get the audiobook today.

This is the first book I listened to from this series. I enjoyed it solo much that I bought book 1. The narrator's voice was a perfect match for how I would imagine the main character should sound.

I enjoyed listening to this book. It was interesting to hear about all the horrible conditions on the boats and how the poor Irish people suffered. The narrator was good- I enjoyed when she did her Irish accent.

I liked the story. It's amazing what people went through to come to America. I liked the chance meeting and developing romance between Mac and Shannon (Shay). I didn't care for the music at beginning and end of chapters. Sometimes the narrator was difficult from r me to understand. I received a free copy of this book from the author and am voluntarily leaving this review.

I loved the story, but found the music at the beginning and end of each chapter distracting. I wasn't delighted with the narration, but I've listened to worse. It's a bit of a Cinderella tale, but overall I'm rating it 4 stars.

This audiobook was great and I loved listening to the narrator especially when she was reading Shay’s part or any of the Irish. I have read stories about indentured servants before and it’s a subject I like. It amazes me that these people will leave everything they know and give up family to try and make their lives better. They really didn’t know just how bad it would be in America and was expecting greater things. Add this audiobook with a sweet romance to your collection. I think you will love it! I received a free copy of this audiobook but was not required to write a positive review. All opinions are my own.

Leaving her home in Ireland and traveling to United States as an indentured servant, Shay was in for some rough times. Meeting Mac on the boat, under unusual circumstances, could make all the difference. I was impressed with the historical information that Christine Sterling incorporated into this story. Seeing what the Irish immigrants endured was absolutely heartbreaking. I did enjoy hearing Shay and Mac’s story. Megan DeLay did a fine job with the narration. I was given this free review copy audiobook at my request and I have voluntarily left this review.

I listened to this on on audio. This is not a topic I read a lot of books about. Ireland to New York. You think one thing boarding and then, reality. This was a great book. I loved the characters in this book. I did want a bit more with Shay and her BBF but this book was not about that. I like how this story evolved. I thought the topics in the book were well touched on and represented. (Irish immigrants, indentured servants, life and death, classes, tenements in the slums, Civil War, and family.) The narrator was good.