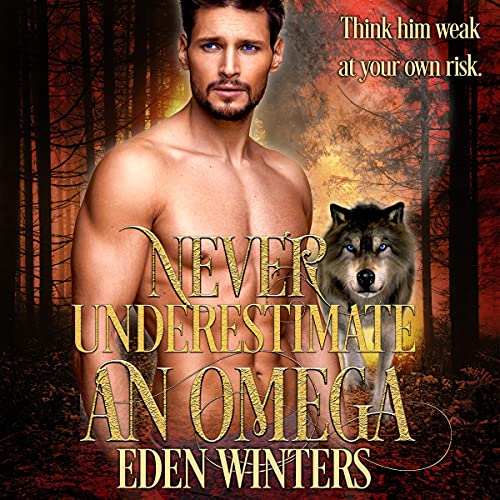 By: Eden Winters
Narrated by: Darcy Stark
Try for £0.00

An alpha leader must have an alpha mate, but Gray wants only one man.

And that man is an omega.

Wolf shifter Gray Collins returns to his home pack to avenge his father’s murder, never expecting to take on the role of leader. Gray is a loner with no desire to tackle the politics of being Pack Alpha. Worse yet, he falls for the man he’s come to depend on - omega Logan Richardson.

According to pack lore, omegas are inferior, nothing more than lowly servants. Or are they? Logan is far too cunning, fierce, and bold to be a low-ranking wolf. While he keeps his head down in public, when they’re alone, Logan stands toe-to-toe with Gray like no one else dares. Mutual respect grows into friendship, and friendship into a white-hot desire neither can fight.

Despite the law and the odds, the two wolves form a tentative bond. Together they lead the pack through strife and threats, all while keeping a secret - a secret that could get them both killed, and plunge the pack back into the savage dark ages.

The entire Lycan world is on the brink of a hard-won lesson: Never underestimate the relentless force of an omega.

What listeners say about Never Underestimate an Omega

I really enjoyed listening to this. First of all the narrator was excellent and managed to give each character a distinctive voice. In this way the story really came to life and was an absolute pleasure to listen to.

There are so many stories in the Omegaverse but this one is very different because it has depth, interesting characters and a great dialogue between the characters. The world building and context for the story was really well developed and well thought out so it all felt very credible. I really enjoyed the way the wolves tried to balance their old traditions with new ways of life and what that meant for the way they treated each other.

My favourite part of this story was simply Omega Logan and his courage and feisty ways. His character is what really pulled the reader in because he always managed to find a way forward and was not to be underestimated, hence the title. The other characters all blended in and gave the story a deep kind of richness. Although this is a stand alone novel, I really did want to stay in this shifter world because some of the other characters such as Alpha Anthony and Shane were really intriguing and I wanted to know more about them.

This is an engaging story with great characters, surprises, heroes, baddies and much to enjoy. Definitely the best Omegaverse story that I have ever read and definitely one I shall read again.

I was really surprised by how much I enjoyed listening to this and it will be going on my list of exquisite 2021 reads. Thoroughly enjoyable.

This is not a straightforward shifter romance.
It was long and felt like more than one book. The political/cultural changes brought about by the main characters had greater prominence than the romance for most of the book.

The story started with an exciting first scene. Not sure anything after that was as adrenaline filled but I liked the main characters and there were several interesting side-characters too.

I thought the narrator did an excellent job of keeping the momentum going. He was easy to listen to and the different voices were done well. Not an easy listen but it kept my attention.

I loved it. It is long and the story is complex. Multiple packs are involved and there are a lot of names to get right. What I liked the most was that the main characters Gray and Logan aren't spending every minute together after they realize their mutual attraction. Nothing is worse than characters who had serious careers that fall to the side when they meet their significant other. Well, the Omega Logan has a job to do and while he loves Gray and misses him, he takes the role of an Omega serious. Gray is a bit of a let down, as his Alpha has not really a chance to come out and play and show off, as Alphas do. But he supports his Omega where he can and learns one or two more things about packs and rules. I loved the world building and the message: Never underestimate an Omega.

I was excited to listen to this story. The storyline was interesting. Lots of interesting moments from there interesting friendship to there quick flash desire. The characters are perfect together and there story was interesting and fun. The narration was perfect.

Sometimes an author writes a book on a subject that you usually avoid, but sometimes the author is so talented that you are enticed into reading the book anyway. I don't usually like alpha and omega type werewolf stories because: 1. ) The concept of alpha /omega roles was based on commonly misinterpreted studies about wolf packs. 2. ) The stereotypes of alphas and omegas are predictable and infuriating.

Eden Winters fixes that in this book. The alpha and omega characteristics are more about personality traits than predestined roles. The core of the story is about Gray and Logan developing a connection, but there are also a few serious underlying messages about social progress. Getting to know the characters was like meeting new neighbors. I liked most of them, and I wanted TP some of their houses. Logan and Gray's pack is welcome to move into the woods next to my house any time. I hope they don't mind coyotes.

This book was an pleasant surprise, and Darcy Stark's narration was entertaining. I look forward to more from this author/narrator team