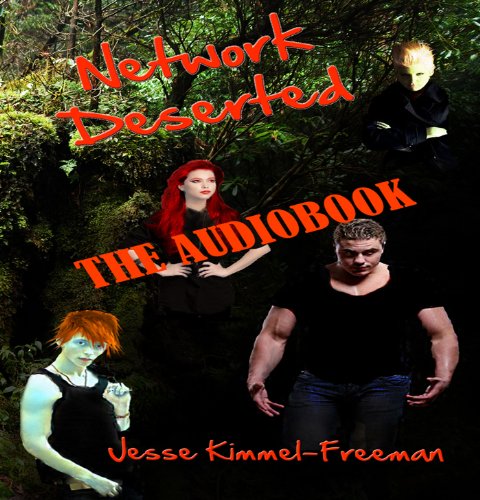 By: Jesse Kimmel-Freeman
Narrated by: Hollie Jackson
Try for £0.00

With the Frontline looming, Scarlet, Henri, Jennie, and Tony must find a way to escape the Network. Their only refuge could be siding with the enemy they have been trained to despise. What will happen when these trained teenagers must learn to exist with their most dreaded foes? The biggest threat to their lives will ultimately change them forever.

What listeners say about Network Deserted

Suspenseful with Evil Lurking Around the Corner

If you could sum up Network Deserted in three words, what would they be?

What was one of the most memorable moments of Network Deserted?

When Scarlett decided to have the microchip taken from her body, we didn't know what to expect. Would she die? Yes, I was surprised!

Yes, when Henri realized that Scarlett was no longer interested in him as a boyfriend, just a friend.

About the Story: The Network would pluck children from their parents, choosing them for their potential abilities. If they didn’t perform as needed they would send them to the Frontline or use them in experiments, creating monsters. If you wanted to live, you didn’t thumb your nose at the leaders.

A team of four very put-together teenagers, who had been trained by the Network to survive and to kill somehow had angered the Network. They were to be sent to the Frontline. No one returns from the Frontline. Their leader, Scarlet, had a hot temperament and a fierce need to protect her team. Oh, did I forget to tell you she had amazing abilities? Before they were sent, Scarlet and her three team members, Henri, Jennie and Tony escaped the Network, using the very skills honed by their intense training. They headed toward the forest, the territory of the enemy.

Once in the forest they had new problems, but Scarlet was willing to chance it. All they needed was safe passage. They soon find themselves in a community of misfits, those who the team had learned to hate. The Network had fed them stories, but were they true? Expecting to distrust the enemy, they find help and knowledge.

Each of the team had a kind of microchip inserted under their skin they had no idea they had. If they leave it in, the Network will find them and kill them, if they try to remove it, they may die. If given the choice of certain death or possible death, the team chose the only path that gave them a chance to live. Through magic and the skill of the vampires, ghouls, werewolves and fae, they each died, but returned to the living by being sired by one of each species. Scarlett became a vampire, Jennie a fae, Henri, a ghoul and Tony a werewolf.
More choices await these brave teenagers, more adjustments, both physically and emotionally. With their previous abilities and their new ones, they become a formidable team. The question is, can they escape the evil that pursues them and use these abilities for good rather than evil?

My Thoughts: This was a fun, action-packed listen. It had all the paranormal happenings which engages my imagination. I was never bored with the pace of the story nor what was happening. I kept listening asking myself what’s going to happen next? Scarlett’s sire, is their new-found friend and also appears to be Scarlett’s true mate. She spends considerable angst struggling with emotions about Henri since she thought he was her true love.

This is book one of the series, setting up the fantasy world that becomes reality to the reader/listen.

Thoughts about Hollie Jackson, narrator: Hollie narrated the story so it was easily understood, not reading too fast or slow. Sometimes, I felt she read dialog out of character, so it took me a second to figure out who was speaking. Her impersonation of the vampire was excellent at the beginning of the listen, but again seemed to stray from character. I liked the matter-of-fact tone she used throughout the read. It made this fantastic fantasy sound like fact.