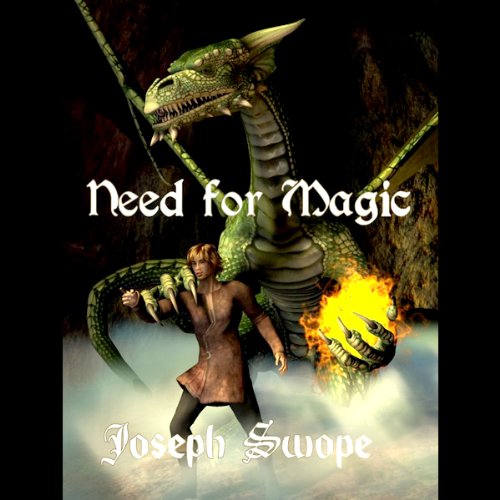 Need for Magic is an unabridged telling of the thought provoking and dangerous novel by Joseph Swope. Chris Dooly and Justine Moral combine their voice talents to offer a fantasy world where listeners can hear the gruff rumble of dwarves, the ancient wisdom of elves, and even the accented spell work of wizards.

The arch-villain is not a dragon, wizard or overlord. The evil one is a charismatic woman who knows what people need. By masterfully playing to everyone's need for approval and their need to feel important, she inspires fanatic devotion and gains the throne of a large nation. Even those with great magical power or deadly skill with a sword have needs. As a result, they too are played like puppets by her deft hand.

Listeners should be wary that they will hear an echo of their own needs and maybe even a bit of magic they can bring into their own world. Need for Magic is also an exploration of social psychology. Indeed, the magic of Need for Magic is based on documented psychological studies gone awry. Conformity, persuasion and obedience are powerful forces that few can resist. Cults, the Stanford Prison Experiment, Stanley Milgram's work, and the Stockholm Syndrome are examples of power more dangerous than any magic spell or dragon's fire. Magic and Social Psychology, like all forms of power, can be used for good or ill. History is filled with leaders, dictators, and heroes who seem to have had a magical hold over others. There are few things more powerful than a group sacrificing for a common goal. The magic of Need for Magic is alive and well today. It can be practiced by anyone who listens to and watches what needs people seek to fill.

What listeners say about Need for Magic

Had me thinking!! very good story very good narration, loved the plot regarding how to control people. Fantastic listen.

Draws you in and makes you believe

The story drew me in right from the start and kept me immersed. I never wanted to hit pause to go back to real life. I could see that the psychological aspect of the magic could work in real life and it was fun to imagine how I could use the magic in my job. The characters were fun and fascinating and I don't know which sub plot I liked more.

The readers were good. I liked how they did not simply read but performed it. At times it soundled like a read through for a play, but it definitely works. There were a few rough spots in the sound quality and production, but the story more than made up for it.

I wish there was a sequel as the end leaves the reader hanging. It is strange to think I acutally miss the characters and wish them well.

This is one hell of a journey!

Even though there is no part to this book has a lot to offer from what is the meaning of yourself to a new view of seeing the world.

Need for Magic story line is good and interesting. The quality of the recording is bad. It sounds like it was recorded in a tin can and the narrators was not very good.