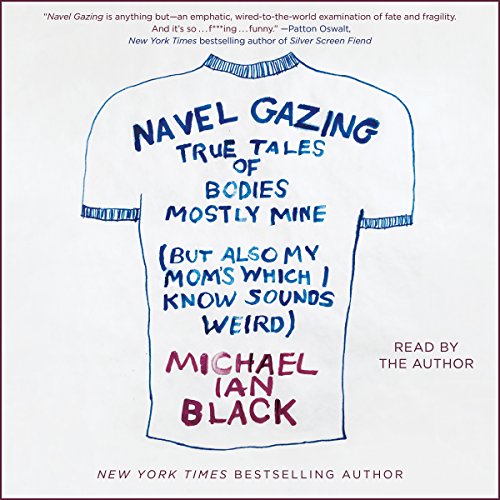 Whether it's family history, religion, aging, or his parents, Michael Ian Black always has something to say in the dry, irreverent voice that has captured a fan base of millions. When a medical diagnosis forces him to realize he's not getting any younger, he reexamines his life as a middle-aged guy - of course, in the deadpan wit and self-deprecating vignettes that have become trademarks of his humor.

The alt-comedy take on getting older, Navel Gazing is a funny-because-it's-true memoir about looking around when you're 40 and realizing that life is about more than receding hairlines and proving one's manliness on Twitter - it's about laughing at yourself.

What listeners say about Navel Gazing

Would you consider the audio edition of Navel Gazing to be better than the print version?

That's an excellent question to ask someone who has read the print version.

What was one of the most memorable moments of Navel Gazing?

There are so many, but I really enjoyed the chapter describing the half-marathon. Especially the last sentence. Amen.

What does Michael Ian Black bring to the story that you wouldn’t experience if you just read the book?

So much. His delivery, his sincerity, his humor. I'm sure it's all there in print but hearing him read allows his intention and timing to really shine.

Yes, and I almost did. Devoured it over two afternoons and wanted more when it was over.

There is so much I can relate to in these stories. Michael Ian Black makes life's true tragedies and the bittersweet melancholy of aging and all its attendant indignities into moments of laugh out loud hilarity without ever being crass or pandering. His self-reflection shows moments of true vulnerability and he owns some of his own insecurities and shortcomings with his humor. Of course it's entirely possible that he's a raging narcissist and is just charming us, but I think he's a really good guy.

Michael Ian Black, you are funny and poignant, no easy feat. Just chronicle your whole life, day to day, it's all I want to read about. I loved your first memoir and even your half of the book with Megan McCain. And this one. I much prefer listening but I bought both memoirs I book form also to send to my cheap friend who would never spring for an audio book. Two things I don't like about Audible, you can't share when you're done and you don't get any photos or illustrations that come with a book.

What made the experience of listening to Navel Gazing the most enjoyable?

First, I love that this was read by Michael Ian Black who gives a great performance.

Uhhh the not that kind of book, but his mom had some solid one-liners

Have you listened to any of Michael Ian Black’s other performances before? How does this one compare?

I'm a fan and have listened to everything by him. Navel Gazing is a much more mature read than his previous titles finding just the right balance between you're not doing it right and My custom van

This book is funny with just the right pinch of dark.

I went into this already loving Michael Ian Black's standup and was expecting it to be great. I was not let down one bit. Not only was it hilarious, but it was also so honest, poignant, and beautiful. I found myself laughing then feeling the need to immediately call my parents. If you're looking for a great listen: here it is.

I’ve now read all of his book (listened) and now wish he would record his very first book so I can also have him read me that one as well. That is all. Good day.

I loved this memoir as I’ve been a fan of Michael Ian Black’s since The State days. I thought he did a great job narrating as well. Especially loved the chapters on running. And go listen to his podcast too, he’s a great interviewer.

What did you love best about Navel Gazing?

I love the comedic honesty, anyone who is starting to age will appreciate this book.

What other book might you compare Navel Gazing to and why?

You're Not Doing it Right

What does Michael Ian Black bring to the story that you wouldn’t experience if you just read the book?

His witty narration. He finds a way to make dry very funny. He often sounds so blase. For me, audiobook is the only way to go.

I was particularly moved by his exercise woo's. They provided me with so much laughter I temporarily forgot that I was in the same boat.

I highly recommend this book. There are some serious tones in the book but with a side of funny. I wouldn't complain if Michael Ian Black created a new book every year!

This author/narrator has always been a favorite of mine. A sarcastic, humorous telling of a very human story. Oddly relatable.

listen to in technical shirt for optimum experienc

If you have a body or know someone who does, this is a must listen.

Entertaining from start to finish and packed with relatable stories, Michael Ian Black recounts life events that highlight the confusing beauty that is life in these meaty vessels.

He's also surprisingly (at least if you are familiar with his comedic tone) empathetic and smart. I have always found him funny and through Audible's new "Channels" feature, found this more intelligent, inquisitive, and yes empathetic side of him via his podcast How To Be Amazing. Listening to that made me want to hear one of his books and I was NOT disappointed.
I'd recommend this memoir to just about anyone with a good sense of humor.
Kudos to his mother for her courage, not just in the face of her illnesses, but also for allowing her son to tell her story "warts and all". I admire that kind of person very much. Many cannot handle confronting themselves in private, let alone in a book that may be read by thousands/millions perhaps.