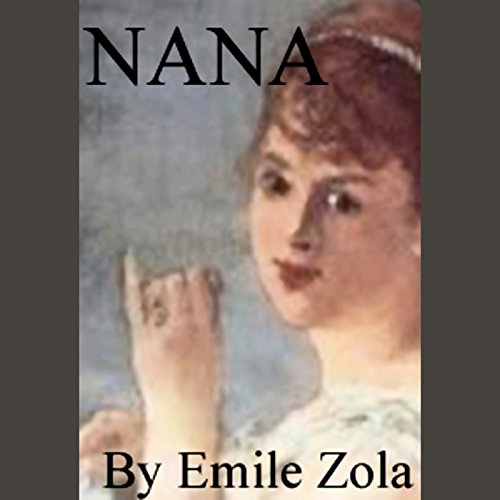 Emile Zola, along with fellow novelists Honoré de Balzac and Gustave Flaubert, was an early realist in French literature. In novels such as Flaubert's Madame Bovary and Zola's Nana, sex and violence were examined with vivid clarity. These realists soon adopted the word naturalism to describe their writings.

Zola's novels were attacked and even banned for their frankness and sordid detail, causing quite a bit of controversy in their day, with their strong emphasis on the unpleasant and unglamorous side of life. The underbelly of 19th century life was a theme for several of its authors, notably Dickens in English. Because of its film versions (which are considerably toned down) and its controversial subject matter, Nana is Zola's best known novel. It is the story of a prostitute in Paris just before the Franco-Prussian War of 1870.

I too found that the narration a little jarring at first, but as I became accustomed to it, I got over it. Overall, this is an excellent rendering of the work of a writer who is too often overlooked in the English-speaking world (I find it incredible that many of his novels are out of print in English).

Reading is not that great

I was not very happy with Walter Zimmerman reading. It was not dramatised enough and accents were made on wrong parts of the sentence, which would make me loose the thought of the author before I would manage to realise that the sentence could have been read differently.
It is a brilliant and very moving story, that evokes deep feelings and makes you think. It even made me cry once.

What disappointed you about Nana?

Nothing. Nana is one of the great 19th century novels

The performance is shocking. A great book read as though it is a shopping list without regard to punctuation, feeling or dramatic awareness. Simply dreadful.

Tried several times but unable to get more than 1/3 through - WZ was good with War & Peace but this seemed like a slow, computer translation with all the wrong emphases and pauses

I too found that the narration a little jarring at first, but as I became accustomed to it, I got over it. Overall, this is an excellent rendering of the work of a writer who is too often overlooked in the English-speaking world (I find it incredible that many of his novels are out of print in English).

Terrible narration, only listened to two sentences, could not bear any longer than that. Will be requesting a refund.

It's a pity people who are just trolling for a page turner sometimes rent books they can't handle. Perhaps the bad reviewers of this book should stick to bestsellers. This is a magnificent book and extremely well read. It may not be to everyone's taste but it is fascinating and intricate. Besides giving you a slice of Second Empire Paris and its night life, it has characters you care about, and makes you want to know what happens next, which are my two measures of a good story.

What a disappointment. The narrator is reading the book, and not acting. there is no change in his inflections or accents as he changes characters and I nearly fell asleep several times. Yawn. I gave up after chapter 5 so this is not a reflection on the book, only upon this presentation.

This title is a poor choice as an audio book. Zola's tedious and precise language is not very suitable to be heard, and the reader's monotone voice makes this a dull, unenjoyable title.

I wish that I had read the two extant reviews before I purchased this. I fully agree with their assessments. Or, just as wise--I wish that I had sampled the audio before. He really does read much too slowly and monotonously. Because of this disappointing audiobook I now always try a sample before buying. I really love Zola and was so looking forward to this. I gave it two tries of less than an hour before ditching. But i do recommend Germinal in audiobook.

I didn't enjoy this book on so many levels. The characters are the most unsympathetic lot you could ever have the bad fortune to spend 18 hours with. I couldn't decide if their conduct reminded me more of the impulse control of preschoolers, the backbiting and cattiness of middle school, or the predatory social interactions of a frat party--maybe all of the above, with sex for sale added in. The novel doesn't have the semblance of a plot until about a third of the way in, which makes the first third very slow going, especially since it introduces a plethora of characters that is takes a long time to sort out. Zimmerman reads the voices expressively enough, but the rest of his narration is so woodenly articulated that he might as well be reading a physics text. The translation feels awkward; more than once I wondered if the wrong word had been chosen. Maybe I would have liked this book more if I knew more about Second Empire France, whom Nana supposedly represents--possibly it's brilliant in that regard, but any political allegory was wasted on me. However, Zola does vividly depict the demimonde of the theatre with its courtesan-artists; if you ever wondered why women in Victorian novels protect their virtue so assiduously, it was to keep from spending the rest of their lives in this kind of bad company.

The very Definition of the word Tedious!

Here?s an audio book that just goes on forever in trite dialog about a wide range of characters doing everyday things for hours on end! I gave up after the first couple of hours and now only listen to bits and pieces when I finish another audio book. I?m 5 hours into this and nothing?s changed ? same trite, uninteresting dialog with absolutely no plot or story development. I think I?ll just erase it at this point and start listening to NPR.