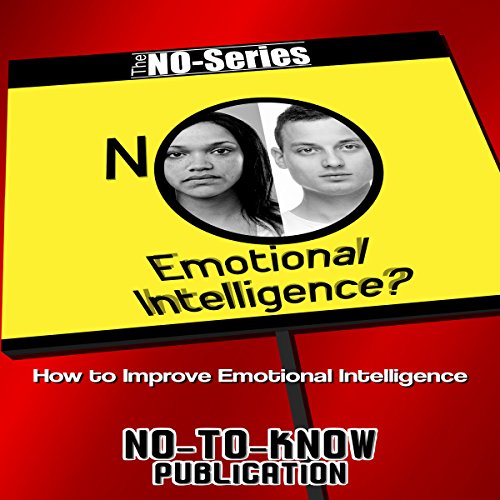 By: No-To-Know Publication
Narrated by: uncredited
Try for £0.00

Do You Have NO Emotional Intelligence?

What is the biggest thing that controls you? No, it's not your demanding boss or control freak mother-in-law. Look inside and ask yourself, for every decision you make, how do you make it, and what is it based off of?

If you think you make it based on rational thinking and that we're all logical creatures...think again! There is something within us older than prehistoric time.... It's something called emotions.

Before our higher-thinking brain was developed, which makes us the intelligent creatures we are today, human beings were a primitive species ruled only by our instinctual nature and emotions.

We like to think we are in control of ourselves, our well-being, our success, and our destiny, but somewhere deep down inside is still this outdated animalistic part of our brain that no longer serves us in the present, that overrides our self-control and lets our emotions run wild.

If our logic were ever to clash with our emotions, emotions would win, because they have been around longer. That's why it's so easy to get lazy and not do what you're supposed to do but only what you feel like doing when you feel like, as well as easily getting emotionally affected when your day has been going so well...until that one person messes it up or some bad news you get, read, or hear causes your emotions to spin out of control.

This is a lack of emotional control, and a lot of us are not in control of our emotions. You're constantly reactive to other people and the things around you, not taking a proactive approach in life to get what you want, whether it's success, love, or happiness.

Now you know why you don't have a strong grasp on emotions. Whatever you do in this world is to experience emotions, such as entertainment or creating memories from new experiences, and as such, it's all about the emotions felt.

What listeners say about NO Emotional Intelligence?