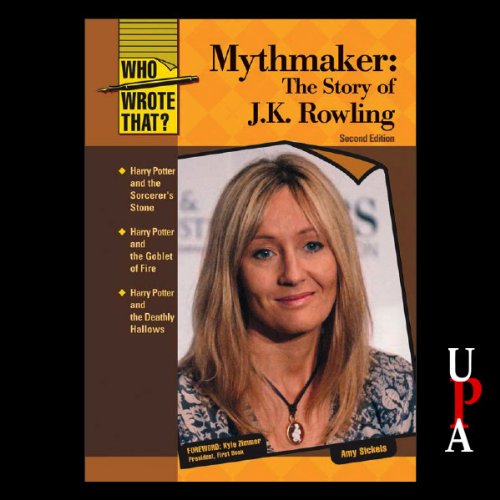 By: Amy Sickels
Narrated by: Kate Reading
Try for £0.00

This brief introduction to the life of J.K. Rowling is perfect for all ages and describes the writing career of one of the most popular authors of the late 20th and early 21st centuries. Her books about Harry Potter's adventures are widely read by adults and children alike and have been translated into more than 64 languages. With the completion of the seven-book series, Rowling's popularity is at an all-time high. But Rowling didn't start out famous. As a single mother, she struggled for many years before her books were published. Mythmaker: The Story of J.K. Rowling, Second Edition has been fully updated to tell her inspiring life story. The book is published by Chelsea House Publishers, a leading publisher of educational material.

What listeners say about Mythmaker

There is nothing new in this short treatment of Rowling and her Harry Potter series. But it is a nice refresher and intertwines the books with events in the author's life.

Mythmaker provides summaries of the books and details on their reception. There is very little about the movies but a wonderful closing chapter about the Potter books and their cultural impact. This is when we get to hear the literary snobs disdain Rowling's style and the adult readers who are "getting dumb" by reading these fantasies.

The reader Kate Reading always puts in a fine performance.

The author mixes concise news reporting and direct quotes from Rowling and her associates, to tell about the creation and unexpected success of the Harry Potter series. I enjoyed how the narrator, though American, used a British accent when quoting Rowling. She closely mimics what Rowling sounds like. Very enjoyable listen.

Not for a kid audience, but not for adults either

Perhaps any group of 9-year-old Potter fans can give an adult a more interesting and animated discussion of Harry Potter than this audio book. In fact, perhaps any nursing home resident can give a more rousing discussion of any subject under the sun than this audio book. So skip the purchase, go talk with an Alzheimer's sufferer for two hours, and both you and the octogenarian will be better off.

The narration is dry and uncompelling. The content is random, disorganized and seemingly more secondhand than fact. And there are also long stretches of plot summary for no reason, making the whole thing feel like an attempt at Cliff's Notes.

And for a second edition and new audio release, there were some glaring omissions, most notably the rise of Potter merchandise, the Harry Potter theme park in Florida, Potter fan fiction on the web, and lawsuits over copyright infringement.

Granted, it would be hard to write a thorough biography on someone who is as private as Rowling, but there are numerous books about the cultural and literary impact of Harry Potter. This information could have been used to make a more substantial overview for adult readers than what's here.