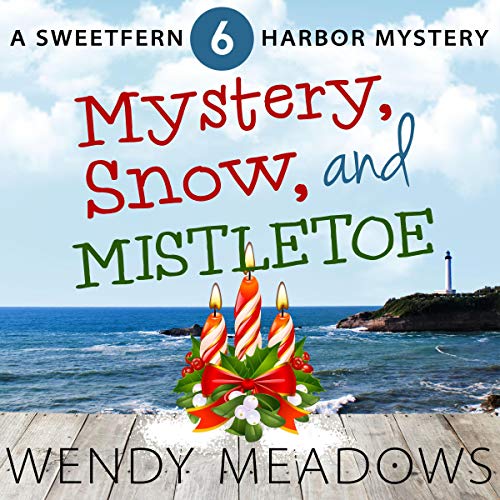 By: Wendy Meadows
Narrated by: Kasey Logan
Try for £0.00

Brenda Sheffield at age 46 is as excited as a young 20-year-old thinking of her upcoming wedding. Christmas Eve will present two weddings, since her best friend Phyllis Lindsey will participate in a double wedding with her. It isn’t until Phyllis tells Brenda of her only wish for a wedding gift that Brenda finds herself involved in a crime that happened five years ago.

Phyllis’ brother Patrick disappeared one hot July day, soon after he began working in Edward Graham’s law office. According to Phyllis, Patrick loved his job and though he had a restless past, he would never just leave town without telling his sister. The more Phyllis talks, the sooner Brenda vows to find out what happened to Patrick.

She enlists the help of her fiance Detective Mac Rivers, who tells her it is the one cold case he hopes to one day solve. When Phyllis’ fiancé William Pendleton hands boxes of decorations that once belonged to his deceased wife to Brenda to use at the bed and breakfast.

She and her father Tim Sheffield go to her apartment in Sheffield Bed and Breakfast and begin to go through the boxes. They are astonished to find letters that appear threatening from the local mailman Pete Graham to Lady Pendleton. The more they delve into the boxes, the more convinced they are that people they once felt upright were not who they pretended to be. That is, unless Lady Pendleton’s husband is involved.

Brenda must find the answer before her good friend and housekeeper at the bed and breakfast marries the wrong man. She knows Patrick won a rare lawsuit against Lady Pendleton and thinks something around that issue caused him to simply disappear without a trace.

Could it be that the mailman and boyfriend to Phyllis’ daughter Molly be involved? There are other suspects that come to mind as Brenda delves deeper into the mystery. The day she finds footprints in fresh snow becomes the turning point for her. Is Patrick Lindsey dead or alive? She hopes to find him knowing, if alive, he will be able to tell what happened. She promises to solve it before Christmas Eve when she will marry Detective Mac Rivers.

What listeners say about Mystery, Snow, and Mistletoe

This is a fun quick listen. If like me you have listened to a few of these books then you will know the characters, this helps because with it being a shorter story and so many characters you don't really get time for much of a back story explaining the relationships and previous cases. However it is not to complicated and a new listener or if you have listened to them out of order you can still follow along. There is no murder to solve, just a five year old disappearance but that works well for this story. There are a lot of characters who with there quirky ways add to the mystery.
With Christmas fast approaching it also means the double wedding between best friends Brenda and Mac and Phyllis and William is just around the corner. Brenda has everything she could possibly want the love of a kind man, her father back in her life, a job and house of her dreams and good friends. Phyllis isn't so lucky the one thing she wants is to know what happened to her brother. The police have labelled it a cold case and after five years with no word from him they fear the disappearance will never get solved. Brenda wishes she could help her friend and when she stumbles over some papers and a key in a box labelled Christmas decorations she begins to think she might be able to provide her friend with a Christmas miracle. We at least she has found a place to start and someone to look into.
I like the choice of narrator, With her bubbly enthusiasm it was a pleasure to listen to.
I was given this free review copy audiobook at my request from audiobooksunleashed and have voluntarily left this review.

This is the first Wendy Meadows book I have read and I found it quite good, it was a little slow at the beginning but once it got going there was plenty of action, lots of suspects and a few puzzles. One thing I thought was a bit far fetched... the footsteps in the snow.... but it helped her solve the case! I found the narrator hard work but that may have been her voice and my own hearing impairment, I could understand Casey better when I slowed the narrative down quite a bit. On the whole and enjoyable book and I would reccomend it to all Cozy fans.
This audiobook was given to me for free at my request and I provided this voluntary review.”

Back in our favorite township, with two happy couples counting down to their wedding day.
One thing marred the happiness and Brenda, in her usual intrepid way, set forth to solve a five year old mystery.
The whole town is dumb founded, when what had been happening was revealed.
Yes, you need to read (or listen) to this intriguing yarn.

Good interesting story and mystery. Involving a cold case of a brother who is missing, once she starts looking into it, finds a lot more is going on. Good plot and good narration by Kasey. Given audio for my voluntary review