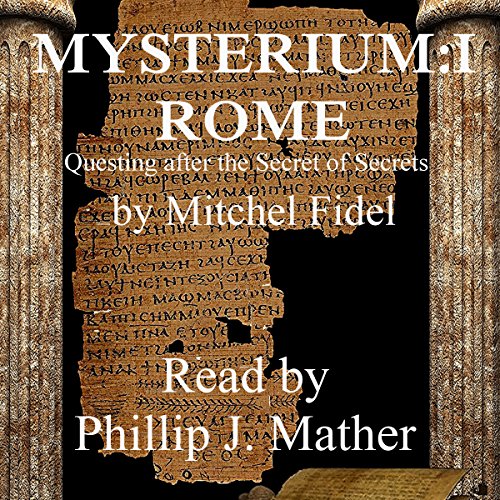 By: Mitchel Fidel
Narrated by: Phillip J Mather
Try for £0.00

Jesus of Nazareth has been dead for some 65 years. The eyewitnesses to this extraordinary life have died, often as martyrs, and only a scattered handful remain. Might anyone have resolved to interview those last few before it was too late, it being a matter of mind-boggling importance? What if someone had?

Mysterium I: Rome presents the story of a young Roman scholar who determines to do precisely that. This sleuth who has the will and the means to comb the Roman Empire for answers is Theophilus, "Lover of God". Opening his very first scroll of Christian scripture, and finding his own name there, catalyzes a series of events that seemingly promises a life mission full of heroic discovery. But soon, Theophilus has cause to wonder about the advisability of his investigation. Danger looms, while he is on the scent of the unfathomable in ominous cavities of a city where so very much is hidden. Catacombs. Forbidden archives. "Witches Hill", a.k.a. the Vatican.

In Rome, life is stupendously raw. Theophilus' adventures put him in congress with gladiators, prostitutes, torturers, crucifiers, conquerors, sorcerers, swindlers, schemers, and an aristocratic matron who insists that she is a daughter of the Beast. Pulled relentlessly toward ever more mystifying mysteries, Theophilus comes to realize that he has undertaken a quest after the secret of secrets.

What listeners say about Mysterium I: Rome

I really tried. The recording is terrible and the narrator is impossible to understand. Sounds like a basso profundo Demosthenes with his mouth crammed full of pebbles. When he tries to change voices between characters, the narration becomes even more unintelligible. Please EQ this recording and get a different narrator.

There are some items that I learned from this historical book about Rome.It's very interesting

Where does Mysterium I: Rome rank among all the audiobooks you’ve listened to so far?

The writing and the narration are better than what I find in most books. Fidel does a good job of painting the early Roman culture and surroundings. Mather has just the right amount of energy in his delivery.

What was one of the most memorable moments of Mysterium I: Rome?

The most memorable moments were probably the sexual encounters. That is not to my liking and I would have preferred that they were not included. However, like much of this novel, I'm assuming that the author is trying to lay the ground work for what is to come in future volumes. I could be wrong. A great deal of Christian apostacy is included in this 5 hour book. My guess is that it's setting us up to discover how the young Theophilus comes to find the truth. If my guess is wrong, I would rate this book much lower than four stars.

Who really was Jesus?

I received this book at no charge in return for an unbiased review.

Cut the Erotica and It's a Decent Story

Good character development putting the story in the minds of the characters. Personally, I do not care for the erotica, but if you want it, you'll find it.

What about Phillip J Mather’s performance did you like?

The narrator did an excellent job with what I would call his strong, classical, continental voice.

Having listened to this first book in a series it strikes me as wanting to be a DiVinci code with erotica. I'll pass on future volumes.
I was provided with a complimentary copy in consideration for an unbiased review.

EPIC ! WONT WANT TO MISS THIS ONE!

Would you listen to Mysterium I: Rome again? Why?

I definitely would! The narrator brings life to the story!

Which character – as performed by Phillip J Mather – was your favorite?

The British accent was appealing !

If you could sum up Mysterium I: Rome in three words, what would they be?

What other book might you compare Mysterium I: Rome to and why?

Have you listened to any of Phillip J Mather’s other performances before? How does this one compare?

Perhaps because I am English, I love Phillip J. Mather's quintessentially 'old boy' voice and enjoy all his narrations.

As a lover of historical fiction I found this story fascinating, and very enjoyable to listen to.

This was a really interesting and entertaining book!Was jesus real?65 years after his death people have forgotten so one man goes in search of interviews from the days when he was alive,if he ever was.Phillip J Mather was the perfect narrator.I really enjoyed it and hope there is a sequel.I was given this book free from the author, narrator or publisher.

4.5★ Audiobook⎮ Mysterium: I Rome blurs the lines between fact and fiction excruciatingly well. It is set approximately 65 years after Jesus’ death and follows a young Roman man in his quest to uncover the truth about the life of Jesus Christ. There’s a lot information “dumping” in this story, but I still quite enjoyed it. If Mr. Fidel hadn’t taught me the root of the word, I daresay I would describe his book as fascinating.

Mysterium: I Rome opened my eyes to several things, in addition to the phallic root of the word fascinating. Specifically, new possibilities concerning the life of Jesus Christ that I would have never considered on my own. Mysterium: I Rome took the bull by the horns (the bull being the legend of Jesus) and did not play around. I would not recommend this to anyone easily offended over religious issues. This is the Da Vinci Code minus the love story and murder mystery plot. It is bound to be provoking to a lot of Christians.

Fidel references several sayings attributed to Jesus Christ in the New Testament that were known to have existed before Jesus’ time. He also points out numerous inconsistencies in the books written by Christ’s apostles and the historical inaccuracies running between them. From a historical standpoint, Mysterium: I Rome is jaw-dropping. From a religious standpoint, it could be seen as heretical, just as every other writing that has dared to question the legend of Jesus.

I’m someone who likes examining things from all angles, so Mysterium: I Rome was just my speed. It fell short, however, because it was so short. I know that this is apparently only the first installment in a series, but even so, a five-hour audiobook is incredibly short. I felt like the plot was just picking up momentum towards the end. That’s disappointing because a structured plot was lacking for much of the story. This installment was more information than action, but that wasn’t necessarily a completely negative thing, especially because the information was so astounding. This is a topic I’ve only dabbled in previously, but listening to Mysterium: I Rome solidified my interest in the roots of early Christianity and I eagerly await the next installment. In fact, I’ve already been scouring the internet in search of a tentative release date!

Narration review: Philip Mather’s narration style was so appropriate for a story set in ancient Rome that I cannot imagine it having been narrated any other way. As with all thickly accented narrations, it can take a while for the ears (or, more accurately, the brain) to adjust to what is being heard. Mr. Mather’s narration was no exception, but I will say that I think I adjusted more quickly while listening to this audiobook than I have in the past. Whether that should be attributed to Mather’s narration or to my lengthy listening experience, I cannot say. I will say, however, that listeners should not be intimidated or immediately put off by thickly accented narration, because you tend to become more accustomed to it over time.

Although I initially thought Mather’s narration to be too difficult to understand, within 10 minutes of listening to Mysterium: I Rome, I found myself able to understand him with great ease. Furthermore, his narration enhanced the story’s atmosphere tremendously. ♣︎


➜ This audiobook was graciously gifted to me by its narrator, Philip Mather, in exchange for a review containing my honest thoughts and opinions. Thanks, Philip!

Great premise, but the narrator ruined it for me

The subject matter was very interesting, so in that regard, yes, but I could not get past the very deep voice and slow narration. I did not finish the book.

I couldn't focus on WHAT he was saying, only the timbre of his voice. Pleasant voice but not for this purpose.

Do you think Mysterium I: Rome needs a follow-up book? Why or why not?

I cannot answer this because I did not finish it.

I received this book for free from audiobookboom dot com for my unbiased review.

What did you love best about Mysterium I: Rome?

What does Phillip J Mather bring to the story that you wouldn’t experience if you just read the book?

If you could rename Mysterium I: Rome, what would you call it?

Title was phenomenal, no need to change it !

Sexy accent on board !!

If you could sum up Mysterium I: Rome in three words, what would they be?

Interesting historical, difficult to listen to.

What other book might you compare Mysterium I: Rome to and why?

I didn't care for Philip J. Mathers narration on this audiobook. Talked really slowly. Very deep, almost sounded underwater. In my opinion detracted from what might be an interesting work. I listened over several high end bluetooth speakers like Bose, and Bose headphones.

If you could take any character from Mysterium I: Rome out to dinner, who would it be and why?

Theophulis. He had the scoop on the interesting history.

I will get the ebook version of this series, but, I'm going to have to pass on the Audible versions if they are narrated by the same narrator.

Thanks for making this available. I'm sorry I couldn't give a more positive review.