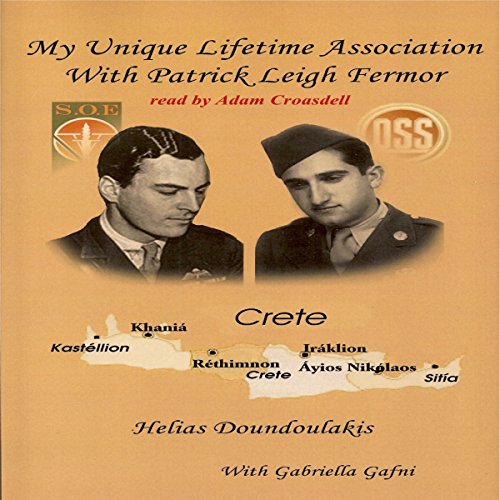 Although many accounts have been written about Patrick Leigh Fermor, the great travel writer, prose poet, adventurer and Renaissance man, few are more deeply personal and direct than this narrative by Helias Doundoulakis, author of I Was Trained to Be a Spy and Trained to be an OSS Spy.

The German presence was still everywhere on the island of Crete in July, 1942, when Helias, a 19-year-old member of his brother George's famed resistance movement, went to the bus station in Chania Porte to greet Patrick Leigh Fermor (then known to the Greeks by his code name, Mihalis), who was scheduled to replace Capt. Thomas Dunbabin of the Special Operations Executive, the British equivalent of the United States' Office of Strategic Services. Prime Minister Churchill's "Baker Street Irregulars", as they were called, were formed to assist local resistance movements in fighting against the Axis powers and to use saboteurs to "set Europe ablaze".

Filled with a spirit of adventure, young Helias hardly knew what to expect of the new captain, and was stunned when he encountered the charismatic Leigh Fermor, whose carefree - often dangerous - approach to life excited and intrigued the boy. What followed was a unique lifetime friendship that surpassed both men's expectations. Now, in his golden years, the author pays tribute to his memories of Leigh Fermor, and commemorates a time long gone, but never forgotten.

Listen to this compelling account, and get to know two very remarkable figures and the heroes that supported the cause of freedom.

The way the story is ready gives the author's story a dignity which marries with prose. Part of an autobiography, the author conveys the pride he had in his role with the SOE and how his boyhood was catapulted into the ruthless German occupation of Crete. I listened to this publication as part of me research into Patrick Leigh Fermor. The affection the author had for Paddy is abundant clear throughout.