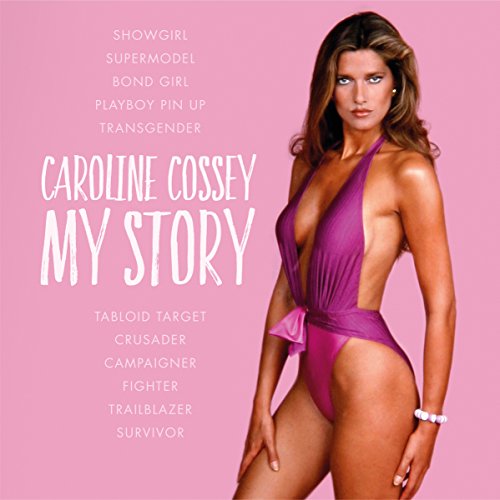 Caroline "Tula" Cossey was born with male genitalia but went on to become a beautiful woman with a successful modeling career.

My Story is Tula's candid thought-provoking, enlightening, humorous, heart wrenching, and motivational account of her struggles: her troubled childhood being bullied and taunted in East Anglia, her dreams of becoming a woman, the operations that liberated her sexually, and the journey from showgirl to James Bond girl to top international model.

At the height of her career, Tula had appeared in Vogue, Cosmopolitan and Harper's Bazaar, and graced the covers of many top fashion and beauty magazines and calendars around the world. She was also the first transgendered model to appear in Playboy magazine and was featured on the cover of multiple international editions.

After she was twice exposed by the News of the World, Tula's career plummeted and her marriage to multi-millionaire Elias Fattal was annulled. In the spring of 1989, she was forced to make a unique appeal to the European Commission of Human Rights: she was fighting for the legal validation of her marriage as a female and the right to have her birth certificate amended after gender reassignment surgery.

Her activism led to appearances on numerous television and radio shows with people such as Phil Donahue, Joan Rivers, Howard Stern, Geraldo Rivera, Montel Williams, Maury Povich, Arsenio Hall, Neal Boortz, David Frost, Gloria Hunniford, and Jonathan Ross. She has also often been featured on Entertainment Tonight, had a day named after her in Atlanta, Georgia, and was given the key to the city.

My Story is not just the true account of Tula's battle for the body she needed to survive and her struggle for the legal rights she deserved as a woman. It's above all an inspirational exemplification of the triumph of the human spirit over seemingly insurmountable adversity and suffering.

Wonderful story from a communiry icon of her time

Thoroughly enjoyed it, well written, well presented, wonderful story from an inspiration to so many. Happy to recommend it !!

It's a beautiful story. I am transgender myself so I know what she went through.
I know her personally now and she is an Angel.
I wish you had her other book you have for sale on Audible,it's supposed to e very good too.

Why are people left handed?

Because they are, through no choice of their own, neither does one choose to be transgender, you just are. It is so sad that Caroline could not be accepted for simply being who she was. She was just trying to be herself. Even some of the people closest to her betrayed her, for what? This is an honest and compassionate account of an extraordinary life filled with highs and lows but ultimately winning against the odds. I wish I knew Caroline, what inspiration and strength one can get from just her words and from her life. She is an amazing woman who fought for reasonable rights in an unreasonable and shameful time in our history.

A True lady and Trans Icon

This book is the story of the Trans bond girl so many say.
I say this is a story of survival and perseverance that leads to a point where you will believe in angels .
I am Trans and this story followed a life of pain. a life of self doubt and fear. then with all the stubbornness of a Woman she turned the corner and not only survived the press onslaught but became a role model for many people who identify as Transgender.
If you want to learn more listen to this. you will NOT regret it .. that I am sure xx
I am a true fan of Caroline.. and hope one day to meet this unbelievably beautiful Lady ..
Till then I will continue the work she started ..
THANK YOU C C.

Wow! What a life story!

Having never heard of Caroline Cossey nor having given any thought to the issues faced by trans sexuals prior to listening to this audiobook, I'm not quite sure how I came about purchasing it!!!! ..... but I'm so glad that I did. The narrator did an excellent job of relating this succesful lady's tale of her struggles and successes of which she has had both in abundance. Caroline Cossey's career alone would have been enough to fill a quality book but her story is deeply enhanced by her family relations and her individual fight.
Be prepared for a thought provoking and emotional listen.
Good luck to Caroline! x

I am amazed by the efforts and how interesting this book is. It gave me hope, understanding and to be aware of the difficulties that I could face being born male in a female body.

This book was so enjoyable for me. As a trans woman, it reads like a fairytale, everything that we strive for she did. And still she was crushed for being the person she is. Thank you Caroline for putting yourself out there, and hopefully making things better for us
(Hugs)

This audiobook is well written and well narrated. It is a heart moving memoir about her pursuit of happiness.
Annika