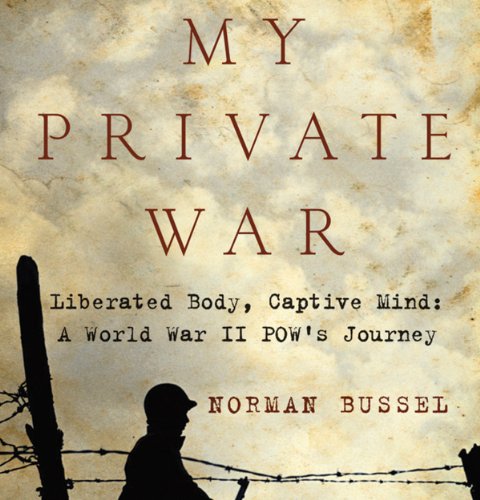 My Private War: Liberative Body, Captive Mind: A World War II POW’s Journey, narrated like a humble war hero by Alpha Trivette, is the harrowing, captivating, at times shocking, and ultimately redemptive story of one soldier’s experiences as a prisoner of war during World War II.

One idyllic moment, 19-year-old Norm Bussel is living a normal life of general good cheer in Memphis. But seemingly before he knows it, Bussel is bailing out of his fiery B-17 bomber and landing right in the heart of Nazi Germany. He is almost murdered immediately, but is instead sent to prison, where the deplorable conditions make a quick death seem the better alternative.

The vivid and emotional story of one soldier's heroic struggle with post-traumatic stress disorder.1944: Norm Bussel, an introspective and happy-go-lucky teen from Memphis, finds himself bailing out of a burning B-17 bomber just months after his 19th birthday.

Touching-down in a field outside Berlin, Norm was immediately seized by local farmhands, who were in the process of lynching him when a passing German soldier put a stop to the execution. For the next year, Norm would struggle to survive at the hands of the Nazis as a prisoner of war.

And that is when the rage began. Rage that he and his fellow captives were cold and starving, their wounds and illnesses left untreated. Rage that men were shot without warning. The rage and emotional turmoil he suffered during that year of hell would follow him home, denying him the peace and stability he and his loved ones longed for.

This is one soldier's searing and honest story of his battle with post-traumatic stress disorder. A battle that speaks to the hearts and minds of veterans of all wars who find themselves with liberated bodies but captive minds.