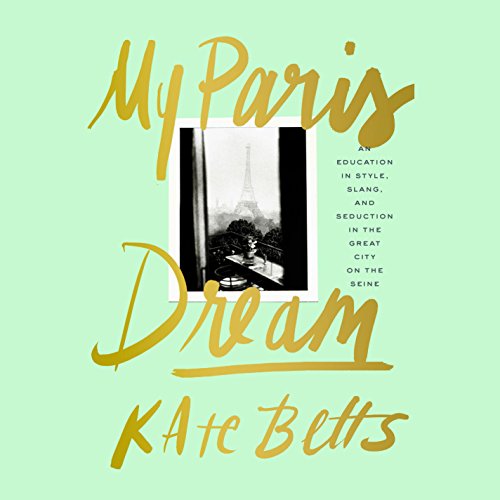 For fans of How to Be Parisian Wherever You Are, My Paris Dream is a charming and insightful memoir about coming of age as a fashion journalist in 1980s Paris by former Vogue and Harper's Bazaar editor Kate Betts, the author of Everyday Icon: Michelle Obama and the Power of Style.

"You can always come back," my mother said. "Just go."

As a young woman, Kate Betts nursed a dream of striking out on her own in a faraway place and becoming a glamorous foreign correspondent. After college - and not without trepidation - she took off for Paris, renting a room in the apartment of a young BCBG (bon chic, bon genre) family and throwing herself into the local culture. She was determined to master French slang, style, and savoir faire and to find a job that would give her a reason to stay.

After a series of dues-paying jobs that seemed only to reinforce her outsider status, Kate's hard work and willingness to take on any assignment paid off: Her writing and intrepid forays into la France Profonde - true France - caught the eye of John Fairchild, the mercurial fashion arbiter and publisher of Women's Wear Daily, the industry's bible. Kate's earliest assignments - investigating the mineral water preferred by high society, chasing after a costumed band of wild boar hunters through the forests of Brittany - were a rough apprenticeship, but she was rewarded for her efforts and was initiated into the elite ranks of Mr. Fairchild's trusted few who sat beside him in the front row and at private previews in the ateliers of the gods of French fashion. From a woozy yet mesmerizing Yves Saint Laurent and the mischievous and commanding Karl Lagerfeld to the riotous, brilliant young guns who were rewriting all the rules - Martin Margiela, Helmut Lang, John Galliano - Betts gives us a view of what it was like to be an American girl learning about herself, falling in love, and finding her tribe.

"An amazing story of a young woman in Paris trying to break into the fashion business as a journalist, My Paris Dream is a fun read. Kate Betts's trajectory of inventing herself is uniquely her own but incredibly universal as well." (Sophia Amoruso, author of #GIRLBOSS)
"With beauty, poignancy, and stirring precision, Kate Betts describes what it means to come into your own by going far from home. My Paris Dream is a valentine to a city, a language, and the thrills and confusions of young love and young ambition. But, even more so, it's a tribute to style itself. Betts has all the elements - grace, humor, humanity, wisdom. What a gift that she has shared them in these delightful pages." (Meghan Daum, author of The Unspeakable)
"Kate Betts's story brought me back to my own young self and the journey I made - in my case, from a small town in Illinois to New York City. She's captured that youthful fearlessness and the romantic impulse we have to strike out and find ourselves - through work that inspires us, through friendships that sustain us, and through heartbreaks that help us learn about our deepest desires. This is an enchanting, magical memoir." (Cindy Crawford)

What listeners say about My Paris Dream

An exceptionally well told story of a young Princeton graduate who makes it to the top of the French fashion scene. The author is the reader and you feel like you are having a personal conversation with her. Keep in mind it starts a little slow, builds momentum as the story unfolds.

Very entertaining and interesting! Loved the French too! Would love another by Kate Betts. Felt like I was in Paris too and could relate to the fashions of the times. #enchanting #absorbing #transporting #tagsgiving #sweepstakes

I recently travelled to Paris and hungered for more. With such an exciting career, wonderful travels and friends, it's disappointing to listen to a story that sounds like it is being told by a bored New Yorker.

Sorry but narrator puts me to sleep

That it was Paris and Parisian s

I couldn't get there

Bless her heart, I believe another narrator could have given this memoir some life.nHer monotone voice just put me to sleep. I hate to be harsh but being truthful.

Yes because of Paris

Beautifully written! It transported me to Paris and my sweet memories of fashion in the 80s and 90s.

Interesting story, but the author's reading is slow and makes her sound disinterested in her own life.