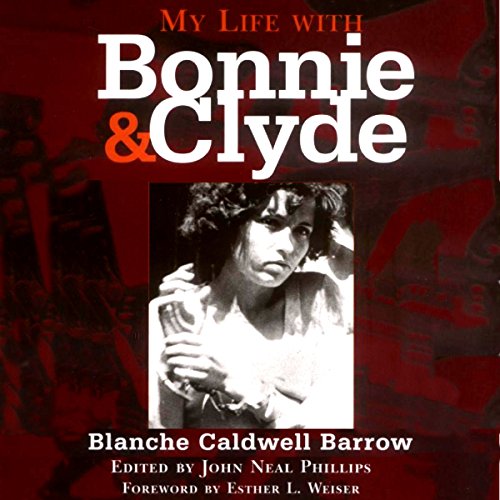 My Life with Bonnie and Clyde

By: Blanche Caldwell Barrow
Narrated by: Valerie Gilbert
Try for £0.00

Bonnie and Clyde were responsible for multiple murders and countless robberies. But they did not act alone. In 1933, during their infamous run from the law, Bonnie and Clyde were joined by Clyde's brother, Buck Barrow, and his wife, Blanche. Of these four accomplices, only one, Blanche Caldwell Barrow, lived beyond early adulthood and only Blanche left behind a written account of their escapades. Edited by outlaw expert John Neal Phillips, Blanche's previously unknown memoir is here available for the first time.

Blanche wrote her memoir between 1933 and 1939, while serving time at the Missouri State Penitentiary. Following her death, Blanche's good friend and the executor of her will, Esther L. Weiser, found the memoir wrapped in a large unused Christmas card. Later she entrusted it to Phillips, who had interviewed Blanche several times before her death. Drawing from these interviews, and from extensive research into Depression-era outlaw history, Phillips supplements the memoir with helpful notes and with biographical information about Blanche and her accomplices.

What listeners say about My Life with Bonnie and Clyde

A Few Stumbling Blocks, but a Worthwhile Listen

I was surprised to learn that Blanche Barrow didn't spend the remainder of her life in prison. This read fills in the gaps that the Hollywood film "Bonnie and Clyde" left out, and it rounded out the characters, especially that of Blanche who, in my opinion, was portrayed as one-dimensional and silly by the Hollywood movie. The fact that Blanche was consulted for the film paints her in a different light. As I listened, I felt tension and frustration that Blanche found herself unable to leave Buck Barrow, even when she found herself caught in the downward spiral of his involvement in Clyde Barrow's criminal schemes. It is a cautionary tale for women who love bad men.
On the negative side, the author took lengthy breaks from the story to describe newspaper headlines and period history. I often felt as if she should just get on with the story. Then, there is the narrator, who sounded as if she was reading to a class of kindergarten students; she read without much passion, e-nun-ci-a-ting e-ver-y word. I don't know the origin of the narrator, but as someone who has lived in the region where the Barrows lived, her Texas accent didn't sound credible. Once you can get past these two stumbling blocks, the story is very good

To hear the words & events of how Blanche Barrow lived with the gang is unbelievable. How she survived was an act of God. This book is a must if you're fascinated by depression era gangsters, no Hollywood spin just raw & vivid.

A Woman Of Her Word

The full extent of my knowledge with respect to this woman was the Blanche Barrow as played by the enigmatic Estelle Parsons in the 1967 movie Bonnie and Clyde. In my mind Blanche was a weak minded, whimpering, whiney little twit with a 'Daddy complex' who had never had an independent thought in her life.

When I was browsing for an interesting new 'read/listen' I saw this book and I thought 'Why not?'. Audible.com will accept it as a return if I do not like it so 'here goes nothing'!

I am so grateful that I jumped in. What a great 'listen'. Blanche was not weak. To the contrary she was strong. Very strong indeed. She 'made her vows'. She married her man and loved him regardless of his weaknesses. It would have been so easy to walk away but she was a woman of character. I know that I could not have been so strong.

A very interesting listen/read. Unlike so many books about this subject it does not go 'on and on' about Bonnie. This is all about Blanche. A multidimensional character that makes me wonder what type of life she would have had should she have been lucky enough to have had a good education. I feel that she may have made quite a positive impression on the world.

It was great to hear the story from the perspective of Blanche. However, the narrator, Valerie Gilbert made parts of this story hard to listen to. She should've just stuck to telling the story straight up without trying to do different voices. Every time she tried to do Buck or Clyde's voices it made me want to cringe! Also, sometimes she made Blanche sound like an idiot when she did her voice sounding like little girl. Also, there were numerous mispronunciations that were very annoying.
I know it's not easy to read a whole book out loud, but she would have been better off just reading it, not trying to act. The parts where she did just read it were very good. Most of the time I had to just focus on the words and ignore the performance.
Other than that, the story is very interesting.

Another side of the B&C story, and this one is so worth listening too. Funny, sad, and exciting; I got more from this than I did the book. There is a lot of added stuff at the beginning of each chapter that is there for period context, some of that is fast-forward material......

What a great audiobook! From the perspective of Blanche Barrow, the wife of Buck Barrow, it sheds light on actual events as they happened. Yes, I recommend this book. It was well worth the time to listen to it.

I would recommend the book but only if they bought a hard copy to read themselves. The narration on this one is possibly the worst I've heard. The narrator pronounces words incorrectly, pauses in a sentence where there should be no pause, puts emphasis on the wrong words and makes following the story hard because of the way she reads the story. Don't waste your money on this one in audio, go buy the book and read it yourself.

I enjoyed listening to Blanches side of the story, not the most intriguing book, but I've listened touch worst.

Narration is monotone with incorrect pronunciation

What would have made My Life with Bonnie and Clyde better?

A more animated narrator with a better understanding of a Texas accent as opposed to one from the deep south.

poor blanche. her whole life defined by a few mnths lived when she was but a child. this is the only real eyewitness account of what happed 90 yrs ago. it sounds like she mourned for the normal life she shouldve had. its a good book its hard to think of blanche and billie jean as old woman. shell always be a 22 yr old starry eyed girl and buck wwill always bev28.. thank you esther neal and blanche for this incitful tale