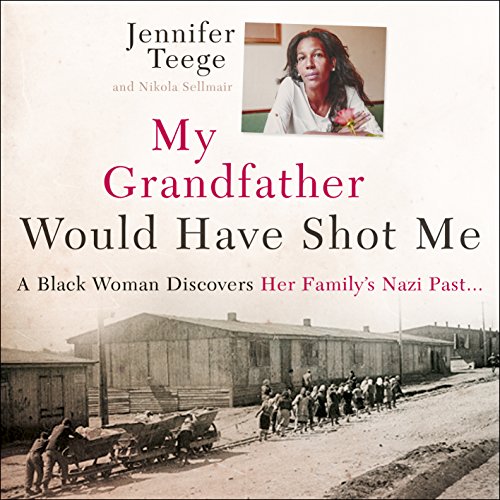 My Grandfather Would Have Shot Me

An international best seller, this is the extraordinary memoir of a German-Nigerian woman who learns that her grandfather was the brutal Nazi commandant depicted in Schinder's List.

When Jennifer Teege, a German-Nigerian woman, happens to pluck a library book from the shelf, she has no idea that her life will be irrevocably altered. Recognising photos of her mother and grandmother in the book, she discovers a horrifying fact: Her grandfather was Amon Goeth, the vicious Nazi commandant chillingly depicted by Ralph Fiennes in Schindler's List - a man known and reviled the world over.

Although raised in an orphanage and eventually adopted, Teege had some contact with her biological mother and grandmother as a child. Yet neither revealed that Teege's grandfather was the Nazi "butcher of Plaszów," executed for crimes against humanity in 1946. The more Teege reads about Amon Goeth, the more certain she becomes: If her grandfather had met her - a black woman - he would have killed her.

Teege's discovery sends her, at age 38, into a severe depression - and on a quest to unearth and fully comprehend her family's haunted history. Her research takes her to Krakow - to the sites of the Jewish ghetto her grandfather 'cleared' in 1943 and the Plaszów concentration camp he then commanded - and back to Israel, where she once attended college, learned fluent Hebrew, and formed lasting friendships. Teege struggles to reconnect with her estranged mother, Monika, and to accept that her beloved grandmother once lived in luxury as Amon Goeth's mistress at Plaszów.

Teege's story is co-written by award-winning journalist Nikola Sellmair, who also contributes a second, interwoven narrative that draws on original interviews with Teege's family and friends and adds historical context. Ultimately Teege's resolute search for the truth leads her, step by step, to the possibility of her own liberation.

What listeners say about My Grandfather Would Have Shot Me

what a story I was gripped from start to finish.. The best story I have ever been part of..

A really interesting true story, not just about a Nazi heritage, but also the complications of being adopted. I liked Jennifer's narrative interwoven with the objective commentary. Not exactly great performances, but that's not so relevant for a factual account. Everyone should read this - some very important messages.

A tale of hate and compassion

A perceptive account of this lovely person's suffering when she discovers her grandfather was a Nazi psychopathic monster. She tells how she copes with her inherited guilt and bravely finds peace.

A discovery of grim family secrets.

I think this story of Mrs Teeges journey through some extremely harrowing and weighty newly discovered family information is fabulous. She tells it with such honesty and feeling that I really would like to hug her for the strength of spirit and fortitude with which she dealt with such life changing information. An incredible story, one that I thank you for telling.
I wish you all the luck in the world for the future you deserve it.

This is a moving, poignant and relebant true life story. A must read for all

Glad I didn't pass by this book.

Powerful, moving. honest account. So many stories in one book. So glad to be able to share this story with one so directly affected.

This is soulful & vulnerable & smart & Jennifer T dips deeply into the meaning & the costs of personal, familial & ideological 'legacy'.

A truly moving and humbling story

At start I struggled but by the end I was totally engrossed, moving and beautiful

"My Grandfather Would Have Shot Me" by Jennifer Teege and Nikola Sellmair, is gripping, heart wrenching, frustrating and fascinating. Seeking her true self, with a family history mired in an embarrassing Nazi Germany, is no mean feat. Jennifer Teege does this relentlessly, avoiding many emotional landmines. A great book full of hope.