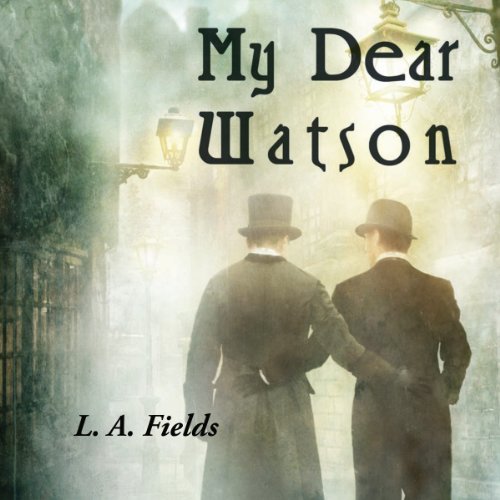 One of the most famous partnerships in literature yields, over time, to a peculiar romantic triangle. Sherlock Holmes. Dr. John Watson. And the good doctor's second wife, whom Doyle never named. In L.A. Fields's novel, Mrs. Watson is a clever woman who realizes, through examining all the prior cases her husband shared with the world's greatest consulting detective, that the two men shared more than adventures: they were lovers, as well.

In 1919, after the pair has retired, Mrs. Watson invites Holmes to her home to meet him face to face. Thus begins a recounting of a peculiar affair between extraordinary men. "You are such a unique person," Holmes says poisonously. "What a shame that history will most likely never remember your name." The question Mrs. Watson faces: did Holmes simply take advantage of her husband's loyalty and love, or did the detective return those feelings? And what to do now that the pair are no longer living together at Baker Street and Watson has other claims on his affections?

My Dear Watson offers readers a romance that requires as much reasoning to puzzle out as it does passion. Mrs. Watson proves a worthy opponent - in intellect, in guile, in conviction - for the great detective.

What listeners say about My Dear Watson

A well thought out and compelling analysis of a potential interpretation of the Holmes/Watson relationship. This looks carefully for subtext in the Conan Doyle stories but it never pretends to be anything more than the authors interpretation. Nevertheless, Fields does build up an convincing character study which plays with the Holmesian canon while staying faithful to it and is at times very moving while at others a little infuriating. It is a clever observation, exploring the relationship of the two men with considerable sensitivity and avoiding, for the most part, voyeuristic sensationalism. The format does get a little bogged down in places but generally works well, making you look at the well loved stories with new eyes. Only main drawback is the awful narration. The reader's accent does not suit the piece at all and she gallops through without pause, throwing away dramatic tension and exhibiting some rather infuriating intonation and lamentable attempts at character voices

Too often tells instead of shows

Would you listen to My Dear Watson again? Why?

While I don't regret the time spent listening to My Dear Watson, I won't repeat the experience.

As a lifelong Holmes enthusiast who has read all of Doyle's work several times, I enjoyed the perspective of My Dear Watson if not the execution. While the topic of the book is engaging, the end result often feels like a graduate literature review thesis with a threadbare narrative built atop it.

The story is narrated by Mrs. Watson, as she recounts her way through Doyle's stories in chronological order, adding in details that the good doctor did not publish, but has shared with her as his wife, about the true nature of his personal relationship with Holmes.

Unfortunately this structure too often has the unfortunate side effect of reducing many chapters to a Cliff Notes With An Agenda, and it becomes at times less a story and more almost a recitation of facts. At the moments when the novel is at its most engaging, it's also violating the narrator's perspective, with Mrs. Watson asserting emotions and motivations she could not possibly know, even if Watson had told her his assumptions about the motivations of others. When it stays true to her perspective, it often feels rote, telling instead of showing.

Abandoning Mrs. Watson's perspective and going with full flashbacks, perhaps narrated by other more transient characters observing the behavior of Holmes & Watson together, could have made for a much more interesting book. For instance a late chapter heavily involves Billy, a paige raised in Holmes' and Hudson's care. While listening I kept imagining how compelling that chapter could have been from Billy's perspective, rather than from Mrs. Watson's recounting of Watson's recounting of an event.

The 'modern day' portions of the novel, which center on Watson & Holmes' reunion at a dinner party late in life, are easily the most engaging and true.

Have you listened to any of Melissa Hearne’s other performances before? How does this one compare?

The narrator plays Mrs. Holmes as a very emotionally controlled woman, almost always keeping her intonation even and proper at all times, even when overwhelmed by emotion. This makes the moments when she does show feeling all the more powerful, and seems like the right choice for the character.

However, the pauses between paragraphs and sentences are often very short, and feel artificially abbreviated. This combined with the steady tone and the nature of the material results at times in a curiously flat feeling.

The voices for Holmes & Watson are well-chosen, although I didn't care for the voice of the Colonel.

The untold story behind the stories

Melissa Hearne gives an outstanding performance in a book that takes characters we've known for long time down a different path. The story within the stories, if you will. Taking this look at Holmes and Watson's relationship may not be for everyone, but if you're willing to give it a listen, I think you'll find quite an entertaining, and even poignant, tale.