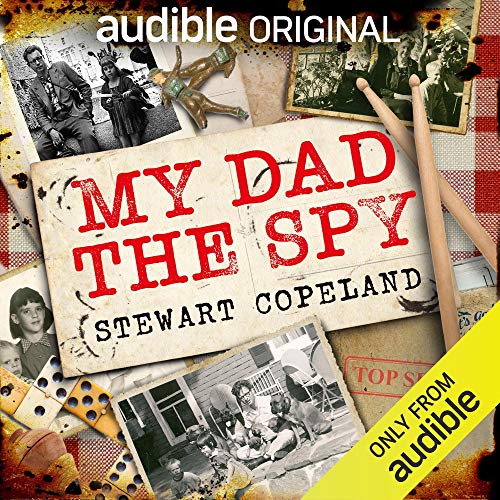 My Dad the Spy

What listeners say about My Dad the Spy

narrated through the perspective of the two sons and daughter, as they grew up in the middle East, calling on family friends and looking back with a critical eye at the once seemingly innocent life events with new information on their father's involvement in the CIA

Mediocre insight into US meddling

Written and compiled by an American it is unwittingly peppered with touches of irritating exceptionalism. Even in the final chapter taking stock of the spy's role in the ME, there is never a vague consideration that US presence was anything but completely necessary - despite the disaster that their foreign policy still brings about to this day.

interesting family story and insight into ME

Well put together story that covered a lot of years and provided great insight into American influence in the middle east. Made good use of other sources to give other perspectives.

Absolutely fabulous, loved hearing more about what happened. I knew a bit it was fascinating.

I loved this. The conclusion is rather naive or blinkered. Nevertheless it was definitely worth the listen.

Well told story and true, very enjoyable. Nice it is told through family so you get all sides of the person.

How well can you know a loved one that lives in the shadow of the espionage world. This is an inside view of what it's like to be a real 'spy kid's.

Always good to learn more about this Maestro

I recently noticed how shy he is. You never hear the guy even laugh until maybe 2015, let alone cry, you really don’t. I have to listen to 4 hours of ‘My Dad The Spy’ on Audible. I already had an insight about how perhaps laughing or crying was forbidden due to his mother’s distress about daddy’s dangerous CIA occupation. Stewdaddy was like Spock, he would smile and crack jokes but never heard him laugh. I first heard him laugh in an interview he did somewhat recently. Maybe he feels he finally earned the right to laugh and cry again. I love him, period. So adorable he is now that he is more comfortable expressing his emotions and talking about feelings. I love watching him evolve into that handsome prince he always was, is, and always will be. Stewart, we love you to peaches....

An unexpected family history of a former pop star, based in and around the Middle East in the postwar period, 1950s and 60s. Slightly annoying overlay of music by The Police but I suppose, it keeps it familiar. The occasional interjections of other family members makes it very engaging. But how much of it is based upon the imaginative embroidering of a narcissistic character? Nonetheless, very entertaining and interesting.

I am sorry to say I couldn't get past the accent and intonation of Stewart Copeland. Sometimes us Brits find certain American accents grating, for me this was one of them. I wish it wasn't that way. I had to give up after about half an hour because it was irritating me.

An okay story, but what did we really learn?

I like Stewart Copeland and I am fascinated by the fact that his father Miles Copeland worked for the CIA. But what emerges here is about an hour's worth of story spread out over nine episodes as Stewart, his brother and sister try to piece together their father's legacy. I am glad I listened to it, but I'm also glad it was free. There isn't enough drama or intrigue or uncovered surprises to make it compelling. Great that they interview some historians, but you still never get a full picture of the man. If you want to read a compelling biography about a spy, read Ben Macintyre's book on Kim Philby or Agent Zigzag. Those are thoroughly researched stories of fascinating characters.

A Story I Always Wanted to Hear

I was a big Police fan in the 80's and of course heard that Stewart's father was one of the founders of the CIA back in those days. Later I became interested in the Copeland family when I saw Stewart's brother Miles being interviewed in a Netflix documentrary about Kim Philby. Needless to say, the Copelands had a singular childhood which produced a group of rather strong-willed, interesting children. And the story of how they got that way is all here, including the story of how the patriarch Miles Axe Copeland toppled governments and invented boardgames. Well worth a listen if you are interested either in the Copelands as part of the music biz, or Copelands as a family of spies (indeed, even Mom was in the game!).

Knew Stewart in different capacity. Didn't know him as an author. Totally entertained. Humorous, informative, well produced, great reflection of fathers legacy and nice to incude brother and sisters thoughts. Love and pride in father and mother weaves throughout recollections. Loved it and highly recommend.

Binged this whole series in 1 afternoon

I loved this podcast. Another spellbinding, informative success by Audible Originals. Whenever I'm asked why I use Audible to service my addiction to audiobooks of every genre, I point to Audible Originals. I've read audiobook versions of dozens of books unavailable on any of Audible's competitor platforms and listened to Audible-exclusive podcasts, and I am always blown away.
My Dad The Spy is no exception. In general, I am fascinated by espionage, Cold War espionage especially. This podcast is fascinating to anyone who has similar interests. However, even if you aren't similarly drawn to books or storytelling regarding espionage, or interested in Cold War history, I nevertheless recommend any American listen to this podcast. It's never been more important to understand the full history of the Cold War. My only criticism is that I found the whole "Langley's full of bad guys doing bad things" extremely annoying. I freely admit that this tendency to become defensive when the CIA is maligned by fellow Americans, not unique to this podcast. Especially when the criticism is coming from a political, military & national security ignoramus, which technically the adult children of the main character indisputably are. It's easy for those who've never been directly in charge of protecting American national security to sit on the sidelines, with a tiny fraction of all the relevant information about military or intelligence operations and say the military or intelligence officers did wrong. But that doesn't mean they really have any leg to stand on. So, that honestly soured the enjoyment of the series. Other than arrogant and resentful adult children of a heroic intelligence officer biased by their having had information withheld from them about his job (despite this being REQUIRED PROTOCOL FOR EVERY INTEL OFFICER WITH CHILDREN IN EVERY COUNTY ON EARTH, to both protect the safety of their families and that of the country) it was a fascinating story that I binged all nine episodes in a single afternoon. Highly recommend it.

More a memoir than spy story

Memoir of Stewart Copeland's life and family - which is fine, but not what I was after.

Stewart Copeland and his brother and sister look back fondly at their lives growing up in Lebanon when their father worked for the CIA. A nice listen while I commuted to work.

I definitely recommend this book!

This is the very interesting story of Miles Axe Copeland, a CIA operative in the Middle East, and father of the author, Stewart Copeland, drummer and one of the founders of the rock band "Police." This podcast contained the early years of Steward and his brothers and sister's lives, because of the "job" their dad Miles had. Steward is a superb narrator, and presented the story very well. His brother & sister chimed in at times with their points of view, It helps us understand the reasoning behind the actions of the US from it's agents, the balance of power in the Middle East, and how these actions influenced our relationships with those countries today.

If you are a history fan, a fan of the band Police, or just looking for a good story, My Dad the Spy will fill the bill.

It was an educational inside look at what the kids of intelligence officers experience. Beware, the last section is a mix of justification (probably not needed) and political rant.

Too much bouncing back and forth in time.

it's a fascinating story but it became repetitive. You know the type. each episode recaps some of the previous for those who didn't hear it.

I don’t know how to evaluate this kind of presentation. It’s not like a novel or even a biography or memoir. It’s more like a captivating conversation or a presentation on NPR. I would add that while it was certainly entertaining, it also had historical relevance.