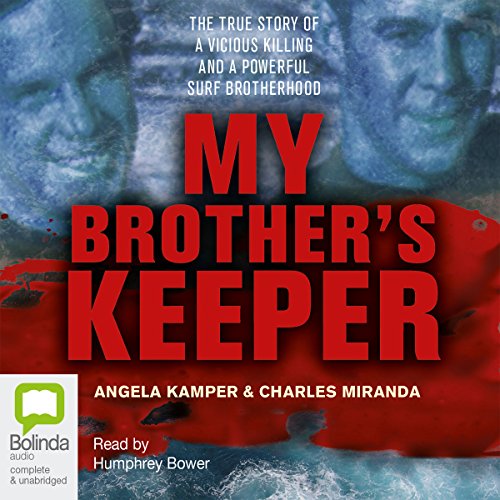 In a weathered baritone that shifts like a faulty witness’ testimony, Humphrey Bower performs this audiobook presentation of the true story of a grisly murder from the underside of Australia’s surfing scene. Written in a serious, journalistic style by Angela Kamper and Charles Miranda, My Brother’s Keeper takes the listener inside the world of the Bra Boys, a Sydney surf gang known for their territorialism, violence, and the words "My Brother’s Keeper" tattooed on their chests. In 2003, Tony Hines, one of the Bra Boys’ leaders, was found on the coastline naked, dead, and with four bullet holes in his head. Hines was a man upon whom myth and reality converged, and My Brother’s Keeper attempts to strip the mask from the man.

The story of a powerful surf brotherhood and the chilling and bloody killing of a brutal underworld figure.

A blood smear trailing along a footpath of a suburban Sydney street went largely ignored by local residents accustomed to hoaxes and bloody turf brawls in their beachside suburb. Initially police suspected it was nothing more than animal blood. But at the end of the trail, at the base of a Maroubra cliff, lay the naked body of notorious underworld figure Tony Hines, shot four times at close range. Hines was a man with a history of violence, a rape conviction and a long list of enemies.

In the months following the discovery of his body, police unearthed more than just a killing. They found a story of revenge that would shock the city and the international surfing world.

What listeners say about My Brother's Keeper