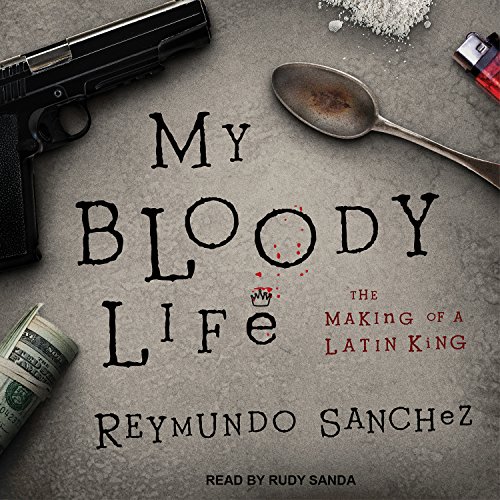 The Making of a Latin King
By: Reymundo Sanchez
Narrated by: Rudy Sanda
Length: 12 hrs and 30 mins
Categories: Non-fiction, True Crime
5 out of 5 stars 5.0 (1 rating)

Looking for an escape from childhood abuse, Reymundo Sanchez turned away from school and baseball to drugs, alcohol, and then sex and was left to fend for himself before age 14. The Latin Kings, one of the largest and most notorious street gangs in America, became his refuge and his world, but its violence cost him friends, freedom, self-respect, and nearly his life. This is a raw and powerful odyssey through the ranks of the new Mafia, where the only people more dangerous than rival gangs are members of your own gang, who in one breath will say they'll die for you and in the next will order your assassination.

“A slow-motion riot of drugs, sex, and gunplay." ( Publishers Weekly)

I keep mulling it over and what it means

Couldn't stop listening to it once I started and now can't get it out of my mind. Lots of violence, sex and drugs - and teenagers dying.

I guess this is what it's like in Chicago if you're a kid who doesn't really belong anywhere and there's a park in walking distance. Wow, there's a whole life waiting for you at the park if you're young and can be fearless in the right situations.

I'm glad the author gave an account of his life over a period of years so I could see that once one is essentially used up by the gang, they don't need you anymore. Replacements are on the way; you're fully expendable.

It's real life but at a much, much faster pace. Maybe that's why it won't leave my mind yet, because I'm still trying to integrate what I learned with what I already thought I knew. And I'm doing what probably any listener would do, which is to try to conjure up a way for society or government or somebody to provide some better options than what the gangs provide.

Good book, but the reader wasn’t a good fit

Overall I enjoyed the book and story as it was laid out... But I found it very difficult and frustrating to continuously hear the reader butcher names and words in Spanish or Spanish slang...

If you are not a Spanish speaker or familiar with Spanish slang, you may not even realize it’s happening, but when you grew up in a similar neighborhood and life it’s hard to hear it so poorly done.

Unfortunately I have found this to be a trend from many Latino based Audible books. Either there are just not many fluent Spanish speaking readers available or there has just not been much attempt to hire them for these performances..

I truly got into this book. i wish thr narrator had been someone more familiar with, at the minimum the actual names of shine of these streets. i am from this neighborhood and it killed me to hear, over and over ,the mispronounced streets and names of some of the characters. the narration could have made this book audible version more enjoyable. phenomenal story.

Great story for people from the hood<br />

I read this book when I was in my early twenties and decide to give it another go in my thirties. TBH it was still a good read but the narrator in this Audio book really takes you away from the immersion. Rudy Sanda was a bad choice for this sort of story that should have been read by someone who at least knows how to speak the proper accents for such a story. Also that fact that our main character goes most of his life blaming everybody but himself kind of makes you not feel sorry for him.

Liked the heart rending story, hated the narration. Were it not for the intriguing story I would have asked for my money back.... if you’re reading a story, make an effort to pronounce names as the ‘original’ would! HATED the way he pronounced the Spanish nick names!!

Very good book, read a while ago but listening to it is like a movie in your head. They need to narrate the the sequel, Once a King Always a King

Loved this book so much!
The story is insane from begining to end you won't want to put it down

story great but the narrator was awful who can't prenounce spanish words correctly at all.

First off, sanda needs a head to toe violation for not pronouncing the Spanish words correctly. Didn’t he have enough time to prep with the tone and accent? I had a hard time understanding the Spanish.

Lil loco is definitely a lost soul but does not deserve any forgiveness or leniency for the chaos and trauma he wreaked in Chicago. gangbanging is such a sad story. The story was intriguing with the day to day operations. Crazy wild story!

Great story. I liked it so much I just purchased the next one “Once A King Always A King”