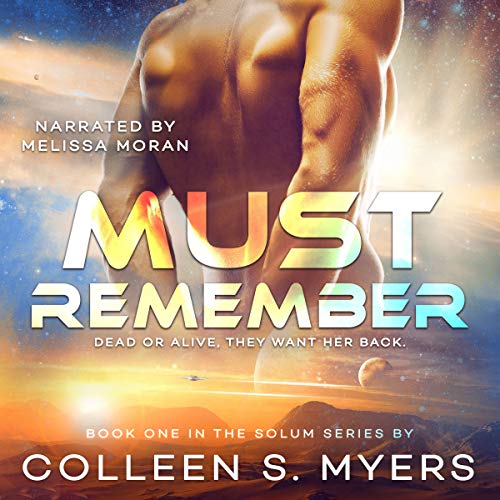 When the E'mani - those pale alien freaks - destroy Earth with a plague of madness and scoop up the remains, Beta is one of the "lucky" ones. For years, she endures their tortures, experiments, and games. Then one day, she manages to escape their ship with her life, and no memory of her time with them.

Stranded on their world, Beta wanders the mountains, looking for a way home. She stumbles onto the Fost - the E'mani's ancient enemy. Their war with the E'mani is old and rooted in magic that the Fost once had and the E'mani crave. Magic Beta soon discovers she's developing along with strange tattoos and disturbing glimpses of her past. The Fost take her in and train her in their ways. As she spends more time with them, she falls in love with their culture and with Marin - he of the hot hands and slit eyes.

But the E'mani took her for a reason and they want her back - dead or alive. If Beta doesn't remember that reason soon, they're all going to die.

What listeners say about Must Remember

Must Remember, Must Read

Must Remember is a non-stop action story! Every page is a page-turner. Elizabeth "Beta" starts off as your average college student, but things take a turn from dealing with a hangover to the end of the world very quickly. Beta ends up on another planet with two suns with no recollection of how she got there. Beta is smart and sassy, but she also drove me bonkers are times. I'm usually not a fan of love triangles... however, I didn't mind this one. I wasn't in love with her attitude about how relationships work, not everything is for everyone... I get it. I do think she judged a little too harshly and quickly. Just because it's not for you, doesn't mean it doesn't work for everyone else. That being said, Finn, Beta, and Marin are intriguing characters and definitely worth following. I started off knowing whom I thought she should be with, however, towards the end, my opinion changed. The world building and story development were great and I thought the narration by Melissa Moran was spot on. I can't wait to read/listen to what happens next!

Fast-paced, great characters, and a well developed world made this a fantastic listen. Beta’s experiences with the Fost and finding her place on an alien world kept me hooked until the end. Fantastic narrator as well, she really brought the characters to life with her amazing performance. I received a free review copy of this audiobook at my request and I have voluntarily left this review.

Out of this world

It all stared with what could’ve been a dream. But was it really? I stared this story blind I didn’t know anything about it at all. I’m so very glad I did. It was such a wild ride with words that made it so easy to imagine you were right there in the middle of it. Melissa Moran portrayed this story with the utmost perfection. It was beyond perfect. I can not wait for more

This was a new author and narrator for me. I enjoyed both the story and the narrator. I did feel like it ended on a cliffhanger. Not sure if there is a second book but I hope there is one got to find out how the story ends

This was my first Colleen S Myers's book. ''Must Remember - Dead of alive, They Want Her Back'' is the first book in the Solum Series, a Sci-Fi, YA story. Overall, I liked this story. Finn, Marin and Elizabeth (Beta) are interesting characters. Somewhere along my listening, I was puzzled about Beta's lovers. The scenery was beautifully well described. The plot was well written, captivating and intriguing. The narration was well done, easy to listen and all characters were easy to distinguish. I enjoyed my listening. I'd love to listen to the next book in the Series. I received this free review copy audiobook at my request and I have voluntarily left this review.

This is the first I have read from this author and narrator. I am going to have to keep tabs on them both for future books, as this one was awesome. The world building and characters were thought out and had rich personalities and growth. I’ve read many alien books before, but none like this. It’s not one of those cookie cutter alien books. I really like reading about the planet, the likeness and all the differences. As far as relationships goes, I thought the tryst with Finn was unnecessary. I get she was attracted to him, well to them both, but it just to me made more sense for her to be with only Marin. I liked Marin from the start. I’m not a super fan of love triangles, I am hoping it doesn't come to that in future books. I can’t wait to read more in this series.

This story starts out extremely interesting. The introduction to what happened before the alien invasion is fascinating. After Beta wakes up with no memory on an alien planet where she's somehow in the middle of a a war between two types of aliens not as interesting. But still a fascinating story as she develops her magic and discovers her lost memories. This was a new authorr to me and I thoroughly enjoyed the story and I'm interested to see what happens next. This is also a new narrator and I'm not sure I will be getting the next one on audio or just reading it. I had a really hard time getting into the story do to the performance. Over all of you like aliens and Magic the story will be right up your alley.

I have to say, I really enjoyed this story. the heroine's voice was authentic, quirky, and unique. The narrator did a great job bringing her to life.

I enjoyed the story but knowing it is a series I would rather wait until all books are out to finish. Great story but was she the only one that survived the madness? What became of those not taken? This futuristic look at an alien invasion is imaginative. I would say if you like science fiction this is worth the time and credits. I will review more as the story progresses.

Can't wait for the second book in the series. Can't Forget and then Distant memory!