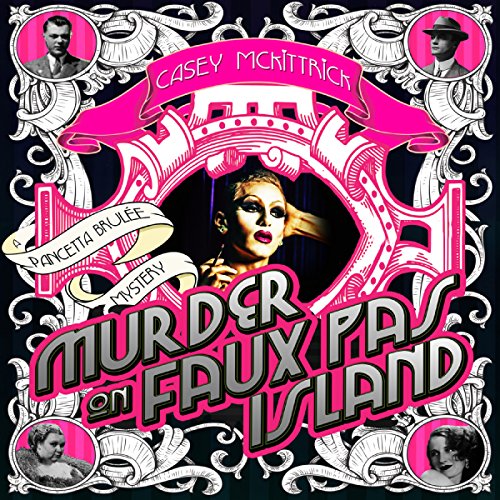 The year is 1935, but this is an America where cross-dressing goes almost unremarked, often unnoticed, and gay relationships are mundane; gay marriage, a quotidian fact of life. Famed chef and female impersonator Pancetta Brulee of New Orleans has been hired to cater a gay engagement party for two prominent grooms at the infamous Faux Pas Island and the Robicheaux estate. Both the family and island have a terrible past, and most Cajuns and Creoles avoid the place like the plague. Pancetta attends the weekend engagement party, only to be faced with a gory murder. The family enlists her and her gorgeous yet restless ex, who happens to be on the island as a groundskeeper. The two embark on a strenuous search for the truth of a tragic Saturday night. Among the suspects are a disillusioned fiancé, a Hollywood starlet sister-in-law, an old family friend and admirer of the deceased, a godmother and countess of Romania, a disapproving mother and father, and a spurned lover of the dead man who has long been a rival for his father's affections. Murder on Faux Pas Island unfolds as a yarn with campy humor and a hint of romance.

A quirky and unique cozy mystery!

There's probably a venn diagram out there that would be helpful in describing this book. The circles involved would include: historicals (mid-thirties Louisiana), alternate histories (where female impersonation is barely commented upon, and gay marriage is already in place), amateur sleuthing (the aforementioned female impersonator, Pancetta Brûlée), whodunnits, some farces (two powerful families are involved, one rich via sex-toys, the other rich via lubricants), and dark-and-stormy-night-isolations (the plot occurs on the titular Faux Pas Island, where everyone is trapped in a large mansion due to a storm).

If that seems like a heady mix, it is.

Pancetta Brûlée is hired to cater a weekend engagement party at the Robicheaux estate, where the son of the family and his fiancé are having what they hope will be an entertaining mixer. The guests are colourful, including Hollywood talent, a Countess, and various important folk in the various businesses of the two families. Things begin with personal friction: Pancetta is not pleased to see an ex on the roster of the hired help, but fairly soon this becomes the most minor concern as the first body appears, and murder chases away all hope of the upcoming family marriage (and business merger).

The mystery itself is tangled enough for sleuth fans to enjoy sorting it out alongside Pancetta. The old estate is almost a character itself, and the otherwise non-alternate history is woven into the place. The "rich family with secrets" is played to full effect, and the inclusion of so many colourful potential murderers with likewise colourful motives works well. I did sometimes find it hard to navigate this alternate version of 1930's Louisiana in a few regards: gay marriage being legalized and gay folk being out without a second thought even in high society was an interesting notion to play with—though there were still characters who were closeted and those who were quite homophobic. I couldn't always figure out how accepted or mainstream the queer culture was intended to be.

As for Pancetta herself, her character is amusing and an interesting mix of attitude, style, and the time period as imagined through this alternate lens. There were a lot of references to Pancetta's first case with her ex. I went looking for that story when I finished Murder on Faux Pas Island, only to realize it doesn't seem to exist. This feels like a second book, in the sense that we meet Pancetta and her former lover with a great sense of history and a previous case under their belt. I can't help but wonder if McKittrick will tell this original tale.

I listened to this one as an audiobook, and it bears mentioning that the audio performer was fairly solid. As a Canuck, my first few visits to New Orleans had be blinking at the ways certain words were pronounced, and it took me a while to learn how to say them the local way. This comes up a few times, and though it didn't throw me out of the narrative, those who have a familiarity with New Orleans and Louisiana might find it more jarring.