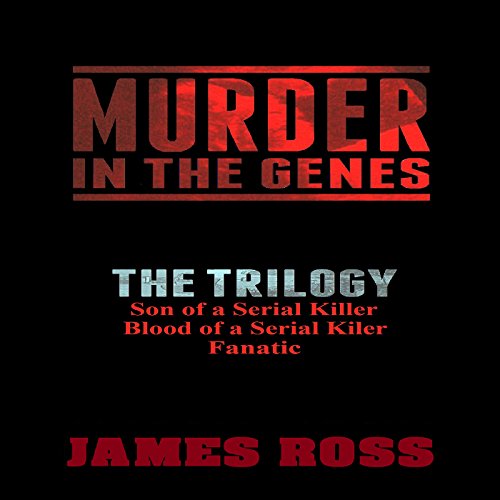 Murder in the Genes: The Trilogy

Son of a Serial Killer: Ben Green is a troubled young man, losing his mind and hearing voices. Worse than that, his nightmares are just beginning.

Detective Inspector Summers hates dealing with drug addicts, thieves, violent men and women, rapists, child molesters, and murderers. She wants to be a doctor in a surgery, saving the lives of the sick. Instead she deals with the sick and twisted. Finally she gets handed the case she wants, the reason she joined the force. Her investigations lead Summers closer to Ben, and his involvement to the case slowly becomes clear.

Blood of a Serial Killer: It's only natural for Benny Jones to want to know more about the father he never met. He's turning 18, and his doting mother, Eve, can no longer put off answering his questions with the excuse that he is too young to understand. Discovering whose genes he carries, Benny grasps why he has behaved the way he has in recent times and is intrigued to learn more about the darker side of his family. He has many questions, and his grandmother, Lily Green, once known as the notorious killer The Phantom, lives on in a mental hospital not far from home. She could supply the answers. The corpses pile up as Benny discovers his purpose in life.

Fanatic: Martin Day is at a breaking point. The loner, ignored and ridiculed for as long as he can remember, looks to his hero for inspiration. Sadly for those in the near vicinity, the person Martin looks up to most is notorious killer The Phantom.

What listeners say about Murder in the Genes: The Trilogy

The story itself is not too bad, but the reading is awful. It sounds as if it isn't rehearsed and the American chap who is reading it doesn't seem to get any English nuances at all. He pauses for far too long at most of the commas - and when simply changing to a new line - often losing the meaning in the text. Fortunately, I didn't pay full price for this title - it was a free book and I upgraded to 'whispersync for voice' for about £3.50. The actor who is reading has a pleasant enough voice, but the reading is very amateur.

Lacks depth of characters, not a believable story.

Characters are unlikeable. Also the facts haven't been checked. Det. Summers would not be able to work on the case as she has a family member involved. Their would be a task force not just a small team, with so many murders.

Would you ever listen to anything by Jams N. Roses again?

He is clear and I would listen to him again but there are many mistakes made in they way words are pronounced. Which I think is just down the fact a American narrator may not know some of the slang terms or words used in this book. The book is set in England, and the American accent does not match the story. He has a good voice but for this book its doesn't work out well.

If you could play editor, what scene or scenes would you have cut from Murder in the Genes: The Trilogy?

Too many detailed sex descriptions, seemed to be used to pad out the story.

I have only listened to three hours of this book. I don't think I will listen to the end. I don't care about the characters and the story is more annoying then entertaining. I did check reviews before purchase and it got good reviews, maybe its just not for me.