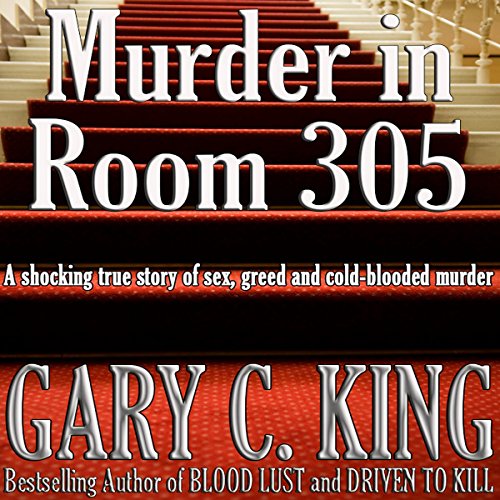 Kathryn Ann Martini graduated from Yale with a bright future in the banking business. Young, beautiful, and ambitious, she had everything going for her. Until she met Michael David Lissy, the sleazy proprietor of a scuba diving school who was a coke addict that consorted with pimps, prostitutes and other known criminals. Burned out and broke, he had nothing going for him. Then he met Kathryn...a match made in hell.

On July 6, 1984, the raped and mutilated body of Kathryn Martini Lissy was found in room 305 at the Valley River Inn in Eugene, Oregon. Soon afterward, police arrested Michael David Lissy, Kathryn's husband of one year. A few months earlier, Lissy had taken out a large insurance policy on Kathryn's life, naming him as sole beneficiary. Then he hired an underworld assassin to stalk and kill his wife. After one of the most sensational trials in Eugene's history, Lissy was convicted and sentenced to life imprisonment.

Notice to listeners: This book was previously published as Web of Deceit.

What listeners say about Murder in Room 305

This is not a pleasant story, telling, as it does, a tale of one man's depravity, seeing everything only in terms of his own desires without interest in the feelings of others in any way - unless it is how to manipulate them to his own advantage. Even his parents were seen only as a possible source of capital. And the most terrifying aspect is that this is a true story.In July, 1984, the half naked body of a young business woman was discovered in room 305 of an Oregano hotel room by the maid who came to clean. This book tells of the investigation to find the killer and the intensive interviewing and searches made to acquire enough evidence to gain a conviction. It is a thorough recounting of the police procedures and the many people who were discovered along the route to prosecution who had been involved with the victim and her husband.

The book is meticulous in it's detailed, but never boring, coverage and, similarly, J. Scott Bennett's narration is clear, perfectly paced and unemotional as befits the text of the book. His dramatisation of the dialogue, especially during the coverage of the trial itself, is superb: with such a miriad of players it would be easy to get muddled, but the voices given to each are distinctive and felt as if they did, indeed, fit the persons described. An excellent performance throughout.

It is difficult not to get emotionally involved in this book which is astonishing in it's story of inhumanity. So it would be incorrect to say that this was an enjoyable Audiobook in the accepted sense. But it was fascinating, horrifying, provoking sorrow and anger until final retribution. And it is a book I am so glad I did not miss. My thanks to J.Scott Bennett who generously gifted me a copy when I requested it. The true crime genre is not one I have previously followed but I will certainly be looking out for others by Mr.King whose presentation of the facts was often more enthralling than fiction.


I found the first part a bit slow, but the compelling main character kept me listening and well before halfway I was itching to find out what was going to happen to the characters. Kept me on the edge up to the end.

Yes, it was a quick (even though it was 7+ hours!) and interesting listen. I also love that it documents events that are not easy to find details of on the internet.

The characters and the pace were perfect. There wasn't too much background story for many of the characters, which (I love when it comes to Jack Olsen's books, but) worked well for this story because it felt like you were experiencing things in the same way that the case was originally unfolded.

A home-run for any True Crime fan!

This was my first Gary C. King True Crime novel and I must say......I'll be back for more! The story was told in a very detailed way - you felt that you were in the room with the key players several times throughout the book! One of the most important parts of an audiobook for me is the narrator and J. Scott Bennett did NOT disappoint! I'm glad to have read (listened) to the book and will be seeking out additional titles from this author & narrator.

****I was voluntarily provided this free review copy by the author, narrator, or publisher.

This true crime story really digs deep and explores the life and death of the promising Kathryn Ann Martini, who was killed far too young. It's totally insane how someone like Michael David Lissy could have committed so much fraud and so many crimes while going unnoticed by the authorities for so long. Lissy was a master of manipulation, making this true story an enthralling listen. I'd recommend this book to any lovers of true crime who also enjoy some extensive background on the types of lives that create criminals.

I really enjoy a good true crime novel, and that's exactly what this is.

This book to me is an excellent marriage between auther and narrator If you enjoy true crime novels don't pass this one up. In a couple of places it gets a little graphic but it is really crucial to the book. Was voluntarily provided this review copy by the author publisher or narrator at no cost to me

If you could sum up Murder in Room 305 in three words, what would they be?

Would you recommend Murder in Room 305 to your friends? Why or why not?

Only the ones that don't mind nightmares!

He makes what would otherwise be quite a dry text more engaging and allowed me to finish the entire book across two days.

It was quite a dispassionate book, but I was impressed by how the book allowed me to reach my own conclusions in the same way the police investigating the case would have done.

This is my first true crime audio/read and will definitely not be my last if this one is an indication of the genre. Gary King did an excellent job of portraying the characters and Scott Bennet narrated the story well. Sex, drugs, prostitution, fraud, greed and the web of lies certainly make you wonder about depravity of the human race
“I was voluntarily provided this free review copy audiobook by the author, narrator, or publisher.”.

This audio book was very well written and preformed. Congrulations Gary C. King. You Expertly put together this peice of excellent literary work. There are not many authors out here that have had me twisted up to the very end. I don't wont to ruin it for the next reader... so all I will say is what a wonderful thrill ride this novel was for me. I feel as I though I just stepped off a Rollercoaster. Bravo to J. Scott Bennett your narration's were exquisitely preformed. This is definitely a MUST read for the. True Crime genres..
"I was provided this audio book at no charge by the narrator in exchange for an unbiased review via AudiobookBoom dot com".

When I received this book, I didn't realize it was a true crime story, as was first put off at the fact that it was set in the past. Once I realized it is a true story, it made more sense. I'm horrified to think that someone that depraved actually walked this earth, but, I am sure there are many more out there. The writing in this story is more like a documentary being told with some conversations, but not much. That being said, it was VERY well written and kept me interested from start to finish. I certainly did not get bored.
I actually listened to the audiobook version. Scott Bennett did an exceptional job of the narration. He has fantastic inflection in his voice so that when there is just commentary/narration being read he keeps one's attention. Not once did I drift off listening or get bored listening. Scott's ability to create voices for the characters and make them so distinct that you know who is speaking without being told is also an exceptional talent.
I would recommend this book, whether audio or not, to anyone who enjoys true crime.

Awful and amoral spouse arranges for the death of his young wife for her life insurance because he is a lazy unsuccessful slob who spends his cash on hookers. The story was well done and detailed but seemed to move a little slow partly due to the narration. The narrator seemed to come across as older than Lissi and had an accent that didnt quite fit in Oregon.