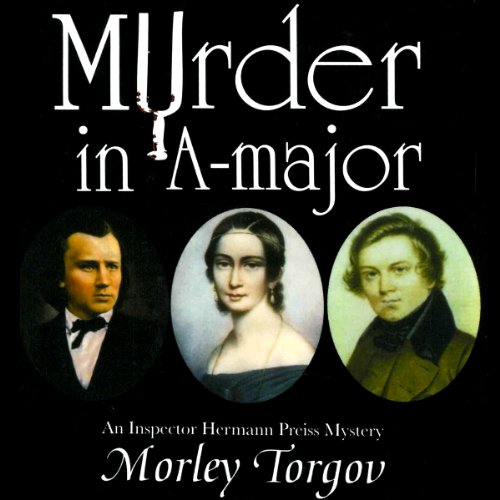 By: Morley Torgov
Narrated by: Christopher Hirsh
Try for £0.00

A wonderful historical mystery that's perfect for classical music lovers. In this engrossing tale, Dusseldorf's number-one detective, Inspector Hermann Preiss, is investigating several crimes committed in the glittering 19th-century world of classical music composers Robert and Clara Schumann. There are jewel heists, adulterous schemers, kleptomaniac music critics, and at least one shocking and mysterious murder. Performer Christopher Hirsh does an excellent German accent, reminiscent of actor Christoph Waltz. A nice choice for those who like their mysteries on the lighter and more glamorous side, and with a rich historical setting.

Take one of the crowning musical geniuses of mid-nineteenth century Europe; surround him with enemies, some of whom are fiercely jealous of his talent, others in love with his beautiful wife (a musical genius in her own right); add several scoundrels including a seller of stolen jewels and a kleptomaniac music critic who ends up murdered under highly mysterious circumstances and there you have the world of Robert and Clara Schumann in the Germany of the 1850s, as told by the narrator, Dsseldorfs top detective, Inspector Hermann Preiss.

A delightful historical mystery with a light touch, the listener is lead into the world of mid-nineteenth century music, where classical composers were stars and their egos were just as monstrous as the rock stars of today. Enter Brahms as the latest rising star in the firmament, and the world of Robert and Clara Schumann is rocked to its core. A mysterious off-key A on the Schumanns piano leads to one of the more interesting cases that Inspector Preiss has ever tackled. But are all mysteries meant to be solved? Inspector Preiss has the final answer.

What listeners say about Murder in A-Major