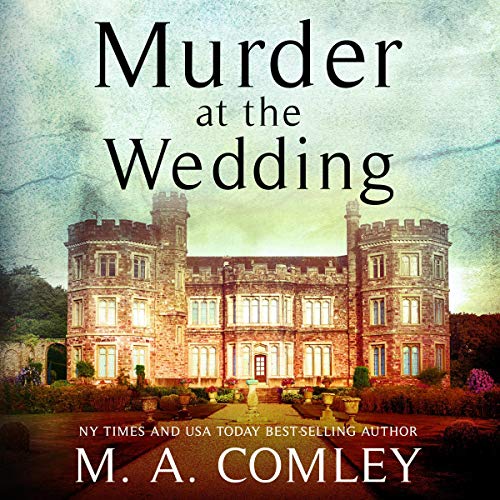 Murder at the Wedding

From The New York Times and USA Today best-selling author M.A. Comley who has sold over two and a half million copies worldwide.

Private investigator Ruth Morgan detests weddings, but when her best friend is about to get hitched, she finds it impossible to turn down the invitation.

A beautiful wedding until the final kiss, when suddenly, the festivities turn sinister. The venue is now a murder scene.

Ruth quickly becomes frustrated by the fact the local inspector in charge of the case proves to be hopeless at her job. Therefore, it's down to Ruth to use her intrepid skills to find the murderer.

The more she digs, the more she learns about the victim and the web of lies he has spun over the years.

Ruth uncovers an extensive list of suspects, all of whom have a legitimate motive for wanting the victim dead. But who is the murderer, and will Ruth solve the case before the inept local police?

This is the first novel in the Carmel Cove Cozy Mystery series.

What listeners say about Murder at the Wedding

What a great cozy mystery it was too

Never having read or listened to one of this author's books before, I had no idea what I was in for. I was very pleasantly surprised though. It took a while to get used to the narrator's accent, but once I hit my stride I thoroughly enjoyed it. If you are a fan of MA Comley, you don't want to miss this offering. If you haven't come across her before, it shall make you want to track down all her other books, of that I am sure. Well done to both the author and the narrator for creating a story you could get lost in.

Easy to listen to, good to start and stop
Easy to follow plot and story lines

I have not ever submitted a review before but I simply had to after finishing this book
Where was this story set? Why was the plot so thin? Why was the narrator’s accent so incredibly annoying? Why was the book ever published? Unless you want to be constantly frustrated by the above avoid it!!

Waited throughout for it to get going. Narration poor seemed to have difficulty with English places. Will not risk book 2 !

Wow what a great start to the series, I enjoyed listening to this book. I was engaged from the start and loved the ending
The narrator voice was ideal for the story. Looking forward to listening to the next book.

Something a bit different

This is very different from M A Comleys normal style but enjoyable none the less took. A lovely cozy mystery. And a bit of a twist in the tail as well

I suppose I should have been warned by the spelling of 'cozy' ....I did listen to the end hoping to find something to redeem it, either in the quality of the writing or the storyline that was being strangled by the narrator. Sadly there was nothing.

Last night, I set my sleep timer for an hour, and "opened" this audiobook. By the time the hour was up, I was hooked - I had to keep listening, so bye bye sleep!
This is the author's first foray into the world of cosy mysteries, and I'm glad to see it won't be the last! I can't wait for the next two books in the series to be released in audio - I am already fond of Ruth and her loved ones, including a lab with a helicopter tail! As usual, the author keeps you guessing till the end, with a great plotline and believable characters. On these cold winter nights, nothing could be better than to curl up in your cosy PJs with a hot drink and a cosy mystery. Bliss!

Simplistic story further spoiled by the terrible narration. There are plenty of better books to choose.

I’m loving this new series. Cosy crime at its best.

When a body is found at a friends wedding all mayhem & confusion breaks loose.
Lovely new main characters to get attached to.
Strong characters too, male & female, MA Comley has another great series here.

This was a very entertaining story. Ruth. a private eye, attends her friends wedding and after the wedding the groom falls to his death. Her friends wants her to find out what happened to her husband. Ruth and one of the police detectives do not get along. So Ruth will have to investigate on her own. When she starts investigating she starts to uncover secrets about the groom.

I definitely would like to do more of this series. The narration was quite good.

I felt it my literary obligation to inform everyone that if you want to cringe with a thoroughly boring book ,.. than this one is the stinker for you...
Me,... I’m getting my money back..!!