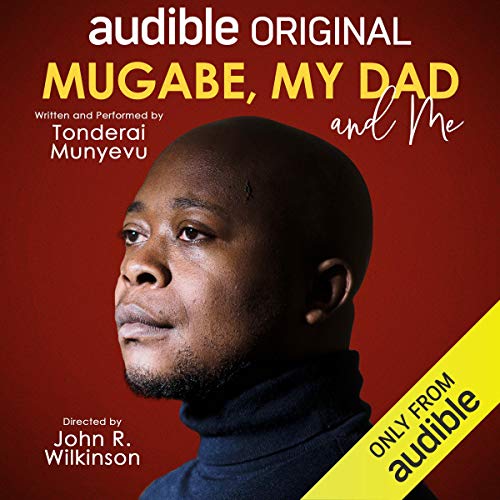 'Something strange happens when the past comes crashing into you, right in the present.'

In the spring of 1980, the British colony of Rhodesia became the independent nation of Zimbabwe. Tonderai Munyevu, a born-free, was part of the hopeful next generation from a new country with a new leader, Robert Gabriel Mugabe. While exploring Tonderai’s personal story and his relationship with his father, Mugabe, My Dad and Me charts the rise and fall of one of the most controversial politicians of the 20th century. Interweaving monologue and original music on the mbira with commentary inspired by some of Mugabe’s more notorious speeches, this captivating one-man show is a blistering dance of memory exploring connection, familial love and what it means to return ‘home’.

The play was shortlisted for the Alfred Fagon Award 2019.

The play was directed for Audible Originals by John R. Wilkinson, recipient of the Genesis Future Directors Award 2018.

The stage production of Mugabe, My Dad & Me is a York Theatre Royal and English Touring Theatre co-production in association with Alison Holder.

What listeners say about Mugabe, My Dad & Me

Listening to Mugabe My Dad and Me is a unique experience and it has been a long time since I have heard such a fresh voice and viewpoint. Beautifully read with sensitivity and also humour by Tonderai Munyevu. I nearly cried at moments and before I knew it was laughing out loud. This is essential listening, I loved it so much I will be listening again and again.

It is a book that covers real life events and weaves through time, showing from direct experience a journey that is familiar to anyone who identifies as part of the African diaspora. The history of Zimbabwe is highly charged and fueled by many different outlooks. Listening to Mr Munyevu's viewpoint is as real as it can get.

The presentation is modern, honest and authentic. You are a companion, a friend, and also an audience being questioned.

Thank you so much to all the team involved for this wonderful gift of a book. Truly Excellent.

An emotive story that propels the listener full circle. This takes you with the main character as he engages with history and heritage, wrestling ghosts from his personal past and that of Zimbabwe. All in an effort to answer “Where you from then?” Compelling listening. Can’t wait to see how it is adapted for stage.

Beautifully narrated and strategically written to give the audience the feeling of being front-seat at the theatre. Cannot find fault with a single detail, even the occasional use of explicit language helped to create a genuine picture - I doubt it could turn the most conservative readers away from this story!

In a nutshell, Mugabe, My Dad & Me is engagingly emotive, hilarious, enlightening, and most importantly - it’s highly recommendable! Looking forward to hearing more of the stories that this story bred...

This is excellent. I really enjoyed it, it was full of wit, heart and imagination. Very much looking forward to the other stories from Tonderai.

There is more to say

I could have given this story 5 stars had it not been for the the explicit language and direct sexual content.
It detracted from the story. The explicit language, I believe, has unfortunately excluded a wider cross-section of society from accessing this art and therefore renders this story as one that chiefly "preaches to the choir" of sympathetic white or white-adjacent folks.

I believed that the exercise of unpacking the complexity of this exploration of the narrative of a Black man, "born-free" in a land of one of the world's greatest ancient civilizations, gay, living in the land of the colonizer that tried to erase any evidence of that ancient majesty and sophistication, grappling with the memories of the trauma passed on from father and dictator is an exercise that should be made accessible to as many as possible. This being especially key for those young, passionate, and convinced of the necessity of the two-fold moral purpose of transforming themselves and society for the better.

To remedy this, Audible could consult with the author to produce a "clean" version which can be shared more broadly and used to facilitate a sweeping social dialogue which could evoke action towards meaningful change.

Separately, the sound of the mbira is absolutely hypnotic, as it should be, given its purpose(s). The sounds are an eerily soothing addition to this piece of art and warrants it's own exploration of the mbira as cultural gem by readers.

A good story, marred only by strong sexual themes

I thoroughly enjoyed this story, I complain about sex because I can't share with children.

A maker is just ready to be grateful when the writer can brighten an Audiobook very beautifully.Every expression of the Audiobook dazzled me. This Audiobook contains a great deal of data that will really help you a ton .Highly suggested this Audiobook for everybody. 🤗🤗

Glad I Added This to My Library

I’m not sure what I was expecting when I downloaded this selection. To be honest, I’m not really sure what about it captured my attention. Still, I was anxious to listen.

I found myself swept away by Tonderai Munyevu’s lyrical voice, fascinated by the pronunciation of unfamiliar words. I was immediately engaged with his telling of his story, so different from my own life and experiences, and then again...the emotion. I connected to the emotions in his story and, though I could not fathom his world, I could understand his experience.

Anything missing from my understanding was, admittedly, due to my own ignorance. I know precious little about African culture, history, or politics. Still, Tonderai Munyevu made me want to know more. For that I am grateful and, again, glad I took the time to listen.

Close to home and heart

Narrated with flare and energy that I couldn't help but listen to the whole play in one sitting. Resonated with many of us who are African Diaspora walking between multiple worlds, yet living on one Earth.

Mugabe, my Dad & Me review

This was amazingly poignant. As a Zimbabwean I could completely relate. So much left unsaid. Brilliant

I'm one of the 'diaspora' much like the narrator. The immigrant. A man with a foot in two boats. So the story is very relatable. But you, who are homogeneous, assertive in your stability, bored - you too may find something worth hearing... especially with such a musical voice. Well done, Mr Muyevu. I could actually see the stage.

So may layers to this exquisite performance. I wish I could see it on the stage. For anyone who has ever been asked ... “where are you from?” Or for anyone who asks this question of people who seem “other” than you, this will make you think and think again.

a rare review from me

It is a worth it play! Started hoping to hear about Mugabe, ended with so much more then that! thank you

Captures so many facets of healing our histories

Explores deep and ever shifting pieces of healing personal history, cultural traumas and it’s effect on individuals, on race and colonization, and on oppression and purpose. This is a beautifully crafted account told in a relatable style, that allows the listener to feel with the author, and understand their perspective. I enjoyed it!