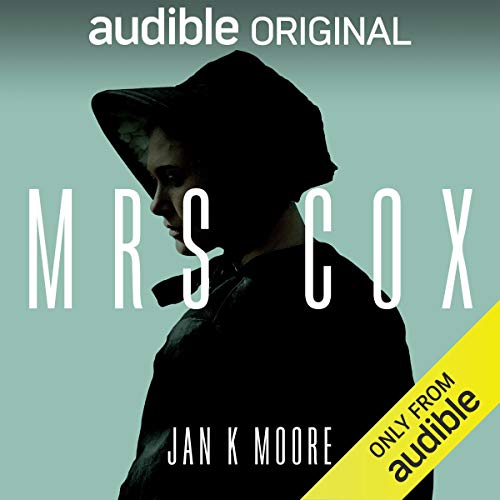 In this Audible Exclusive production, Jilly Bond narrates Jan Moore’s historical crime thriller Mrs Cox. A deserving finalist for the Audible Crime Grant, Mrs Cox follows the tale of three heroines on their quest through Jacobean London as they seek to find justice for their murdered friend.

About the Book
With King James on the throne of both England and Scotland, a period of stability seems to have arrived. But the exposed gunpowder plot to blow up Parliament serves only to heighten the anxiety and panic of the people. Nowhere is this more keenly felt than in London - a city that is also struggling to deal with its exploding population.
In this metropolis of dreams and nightmares, trouble stirs.
A well-known, elderly resident of Billiter Lane is missing, presumed dead, and when the corrupt local authorities attempt to frame an innocent woman, the task of discovering the truth falls to a trio of unlikely heroes/heroines.
Led by the charismatic Mrs Cox, the three friends embark on a mission to bring the real culprit to justice. On their quest, they must learn to navigate the danger that lurks around every corner and manage to avoid the attentions of the crooked alderman Blincoe and his cronies.

About the Narrator
Jilly Bond is a highly-respected actress of stage, radio and television with a career spanning three-and-a-half decades. Having featured on Judge John Deed, Doctors, and As If, she is perhaps best known for her theatre appearances at the National Theatre and across the UK where she starred in plays by the likes of William Shakespeare, George Bernard Shaw and Oscar Wilde. Bond has provided narration for numerous productions across the Audible catalogue and has featured on hundreds of audiobooks in the last 15 years. She has been awarded four Audiophile magazine Earphones Awards.

What listeners say about Mrs Cox

A group of tradeswomen in 17th century London not only seek to find who has killed one of their number, but must try to prevent the execution of an innocent woman.The detail of street life is absorbing and the pace quickens as the scaffold is prepared for her hanging. Excellent variations in the narrator's voice make it clear which of the characters is speaking, without the exaggerated accents of some readers.

It’s January 1608. London is dark most of the time, and the citizens are restless. Food shortages put residents of the poorer neighborhoods in increasing peril, though the authorities are still hiding the extent of the grain shortage. When a well respected woman of the Aldgate neighborhood dies under mysterious circumstances there is no lack of suspects. Just proof.
Jan Moore has created a powerful sense of time and place, and one of her story’s most salient features is the disregard the men have for women. The victim’s landlord, Mr. Sutton, proprietor of the alehouse across the street, investigates her disappearance and discovers not a body, but the bones of a hand, burnt in the fireplace, a detail based on a true crime of the era. He’s a rascally sort and people are willing to believe he might have done her in.
The local Alderman, Blincoe, is trying to expand the domain of Aldgate through the acquisition of Duke’s Place, widening of the roads, and construction of housing projects, with an eye eventually to becoming Mayor. A number of people, including the current mayor, suspect him of dirty dealing, but aren’t sure how to stop him. Blincoe also had a motive for murder, because the victim could thwart his development plans.
Moore’s narrative is as full of colorful characters as a Dickens novel, and some of their names are equally apt. Particularly entertaining is the newspaperwoman Mrs. Gosson, so close in sound to gossip, which well describes her stock-in-trade. The irrepressible laundress Bitty is a lot of fun, and the vivid procession of sticky-fingered maids, apprentice needleworkers, and persons of both sexes harboring secrets will stay in your mind long after the story ends.
Rumors suggest the murderer was a woman called Mrs. Abbott, who was wearing a dress decorated with cobweb lace. Eventually, a woman so described is found. She’s tried, found guilty, and due to hang, but Mrs. Cox knows she’s not guilty and persists in trying to save her. Moore has done a creditable job imagining the difficulties and prejudices the women would face, confronting the disinterest and intransigence of the male authorities and the venality of those with a smidge of influence.
I enjoyed the book’s award-winning narrator, Jilly Bond. She has a significant challenge in developing distinctive voices and speech mannerisms for this colorful cast and conveys the different women expertly. The men’s voices are a little less convincing, yet they are easily told apart. If you like historical mysteries or pre-Dickensian London, you’ll find this book both intriguing and delightful! Mrs. Cox is currently available only in its audio version, was a UK finalist for an Audible New Writing Grant: Crime Edition 2018.