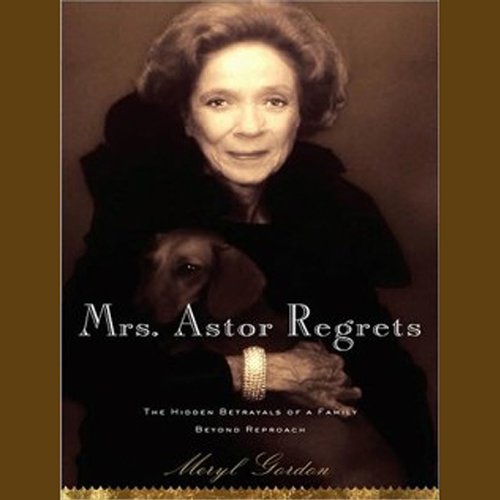 The Hidden Betrayals of a Family Beyond Reproach
By: Meryl Gordon
Narrated by: Lorna Raver
Length: 13 hrs and 41 mins
Categories: Biographies & Memoirs, Entertainment & Celebrities
4.3 out of 5 stars 4.3 (3 ratings)

The fate of Brooke Astor, the endearing philanthropist with the storied name, has generated worldwide headlines since her grandson Philip sued his father in 2006, alleging mistreatment of Brooke. And shortly after her death in 2007, Anthony Marshall, Mrs. Astor's only child, was indicted on charges of looting her estate. Rarely has there been a story with such an appealing heroine, conjuring up a world so nearly forgotten: a realm of lavish wealth and secrets of the sort that have engaged Americans from the era of Edith Wharton to the more recent days of Truman Capote and Vanity Fair.

New York journalist Meryl Gordon has interviewed not only the elite of Brooke Astor's social circle but also the large staff who cosseted and cared for Mrs. Astor during her declining years. The result is the behind-the-headlines story of the Astor empire's unraveling, filled with never-before-reported scenes. This powerful, poignant saga takes the listener inside the gilded gates of an American dynasty to tell of three generations' worth of longing and missed opportunities. Even in this territory of privilege, no riches can put things right once they've been torn asunder. Here is an American epic of the bonds of money, morality, and social position.

My time would have been better spent reading the funny paper.

If you’ve listened to books by Meryl Gordon before, how does this one compare?

Would you listen to another book narrated by Lorna Raver?

Do you think Mrs. Astor Regrets needs a follow-up book? Why or why not?

Not by this author. I can't waiting to get to the meat. It never happened. This is a surface only book.

It's a powerful genre, wanting to read gossip about how the rich are, deep down inside, just like us. I listened to this book thinking "good, I get to see rich people having trouble due to having so much money" but ended it feeling sad and sorry for all of them. None of them deserved what they got. I guess it's more of a curse than a gift.

Poignant recollection of a life lived

This book was both fascinating and heartbreaking. It is the story of a family who had so much, wealth, prestige, privilege. Yet in spite of it all the things that really matter in life were squandered. It gives you a look inside the life of one of New Yorks greatest Philanthropists. How now woman's desire to do so much good for others, led to bitterness, and estrangement within her own family. You will not easily put this book down once you begin reading.

THE BEST BOOK I HAVE READ IN YEARS

Where does Mrs. Astor Regrets rank among all the audiobooks you’ve listened to so far?

Top of the list. I even enjoyed it the 4th and 5th times I listened and shall listen again as well

What was one of the most memorable moments of Mrs. Astor Regrets?

When the gold digger Charlene otherwise known as Miss Piggy is exposed to the world for who she is and what she did...too bad they couldn't give her the jail time she so RICHLY deserves. She is GREED personified and now the world will know the facts.

Her voice and talent are sublime.

Yes... when they pronounce her son and Miss Piggy GUILTY

I fell in love with Mrs Astor and her staff and I ADORE Mrs De La Renta who is a true friend and a class act.

It was an interesting and sad story of a family with little love. Wished the end would have included the trial and how the will was distributed

A page turner. Can't believe that greed in such a rich family could be this horrible for the matriarch.

A lot of characters.

Would you consider the audio edition of Mrs. Astor Regrets to be better than the print version?

Loved the book, well read by the narrator. There were, however, a lot of people in the story to keep track of...but I guess that's what happens when you are Brooke Astor.

What was one of the most memorable moments of Mrs. Astor Regrets?

The saddest thing was the lack of familial love between Mother and son, father and sons.

NO. Needed a break from the fighting.

I loved it. Very captivating. I enjoyed the reader as well as the story being told.