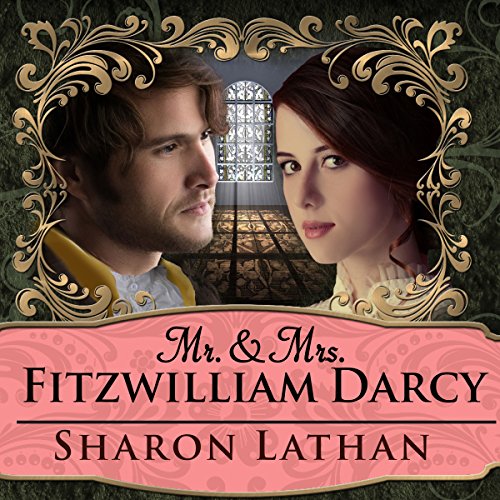 By: Sharon Lathan
Narrated by: Corrie James
Try for £0.00

It's Darcy and Elizabeth's wedding day, and the journey is just beginning as Jane Austen's beloved Pride and Prejudice characters embark on the greatest adventure of all: marriage and a life together filled with surprising passion, tender self-discovery, and the simple joys of every day.

As their love story unfolds in this most romantic of Jane Austen sequels, Darcy and Elizabeth reveal to each other how their relationship blossomed. From misunderstanding to perfect understanding and harmony, theirs is a marriage filled with romance, sensuality, and the beauty of a deep, abiding love.

"This is probably the hottest Austen sequel yet." ( Publishers Weekly)

What listeners say about Mr. & Mrs. Fitzwilliam Darcy: Two Shall Become One

I generally enjoyed this, but it gets a bit repetitive and even juvenile at times, with the repeated endearments and constant sex (not graphic). A bit more Barbara Cartland than Jane Austen!

Unless I knew the person was into romantic chick flit then no. It was very mills and boon style passionate romance.

hearing the development of Darcy and Lizzies relationship

Which character – as performed by Corrie James – was your favourite?

I really liked her interpretation of Darcy, she made him very passionate and Manly and romantic.

Oh well, it was only 1 Audible Credit

What would have made Mr. & Mrs. Fitzwilliam Darcy: Two Shall Become One better?

A little more character development so they are less 2nd rate cardboard cut outs. They certainly don't resemble the character from the book, I can't comment on the characters as portrayed in the 2005 film as I gave that a miss.

What was most disappointing about Sharon Lathan’s story?

That the reader managed to slog her way through the book. She had a pleasant enough voice and it's a pity she didn't have better book to narrate.

What character would you cut from Mr. & Mrs. Fitzwilliam Darcy: Two Shall Become One?

The book is not based on Jane Austen's Pride and Prejudice, but on Hollywood's interpretation of that book, and we all know Hollywood doesn't bother too much about sticking to the original. I enjoyed Jane Austen's book, (which surprised even me). This book however, the characters, were not the same characters as in Jane Austen's book, except in name. They were in fact not even characters as at no time did I even feel thy could be real people. Cardboard cut-outs, 2nd rate porn actors or shadow puppets yes, real people, no.The only bright spot for me was that I hadn't used my credits for a couple of months and so using one credit doesn't feel like spending real money for this. I was expecting something a little more like P.D.James "Death Comes To Pemberley" as a follow-up to Jane Austen's book, but it's not even close. However I'm sure this has an audience with Hollywood housewives who also haven't read the book.

Oh Dear, what a waste of time.

I am a Jane Austen enthusiast. I had hoped that this book would be a good sequel to her original work. How disappointing this book was. The author has made no attempt at any research about the place where this is set. The Derwent valley of Derbyshire in Northern England does not and never has had wild turkeys! Turkeys are native to America. There are no creeks in Derbyshire, many rivers, streams, brooks and becks but no creeks. I think the reader did a good job in reading this, she did it without laughing especially when reading the too frequent and badly written sex scenes of which there are far too many. The Darcys came across as shallow sexual athletes with very little character development. Other characters in this book are also poorly developed. Okay so I am probably not who this book was directed at, being a 66 year old male but I do enjoy a well written romance, and this is certainly not well written.

Story good Narrative not so

Narrative random in parts. Sounded as though breaks taken in middle of chapter so tone of narrator is ifferent halfway through. This gets distracting after a while.

Also story based on film scenes rather than book and this again is a little distracting in parts.

An intimate look at what came next

I enjoyed this intimate exploration of the relationship between Lizzie and Darcy. Both of them behaving as I would have hoped.
Lathan builds on the romantic notions we have, for years, woven around these iconic characters.
I will without a doubt purchase the next instalment.
The narration was superb and enjoyable.

I love this story, I've read it several times. But the woman that is reading this audio books has the most horrifying mouth sounds and turning down the volume didn't help. I had to turn it off. Seriously, if mouth sounds make you crazy, stay away from anything this narrator reads.

Do not think this is Austen fan fiction. This is PORN! I picked this book sometime ago and it has sat in my library waiting for me to enjoy, not the case. I have listened to other fan fiction who have carried on the saga of Jane Austen and been pleased although there can be no substitute for the original. I am sure Miss Austen would be turning over in her grave to know her story has been so abused to this point. Do not waste your money on this as it is a abomination to the memory of Austen books.
If I could this would receive no stars.

I love this book. It always brings me peace to read it. Very beautifully written.

Way to much sex, read more like obsession than love, to mushy with the constant confessing of love and pet names. Should have stayed a daily blog! Definitely returning this!

Not the Elizabeth I know

This is a closed-door story of the P&P saga. The author is clearly talented. The passionate scenes were an interesting take and it's nice to get out of the propriety and prescribed etiquette of society of Regency England. My issue was two-fold: there didn't seem to be a plot, Three quarters of the way through I asked myself "is there more to this story other than wake up, be merry, ardent marital relations, declarations of unending love and looking into fine eyes." There didn't seem to be. No rising action, just action. No climatic obstacle, just climax. The second troubling part was that the Elizabeth in this book seemed dependent, needy, lacking confidence. The Lizzy I know would wake up, realize Darcy is gone and go on a confident and energetic exploration. Not fret to the point of tears over being abandoned. I just didn't feel the connection between the Canon and this story. And I didn't feel drawn into the book.

This is a lovely peaceful quiet book to enjoy

But not particularly an exciting or fast paced one. The pacing at times is quite slow, b but the narrator's voice is pleasant, encouraging a lovely, restful reading time.

I love these books. I bought the paperbacks too

these are a great conversation of the original work.i can't wait to listen to the next book

I had to skip a lot because,constant description,
physical intimacy ,was embarrassing.Very highly
offensive .Being , the reference,to relations or
love making or just holding each other.Going into
detail physical, experiences one is experiencing.
is not necessarily..IEnduring loving statements..
truly suffice.
This is the sad ,part mostthe story was
over shadowed by physical lustf!
I wish the terms used would be more ,appropriate

for that time. That would affect hopefully for this
time .If they were not married ,i would have stopped it.

But it fulfills the need to envision what might have happened after the wedding. Dialog was more like written words, not as natural as conversation. Would have liked a little more plot vs. the plethora of love scenes.