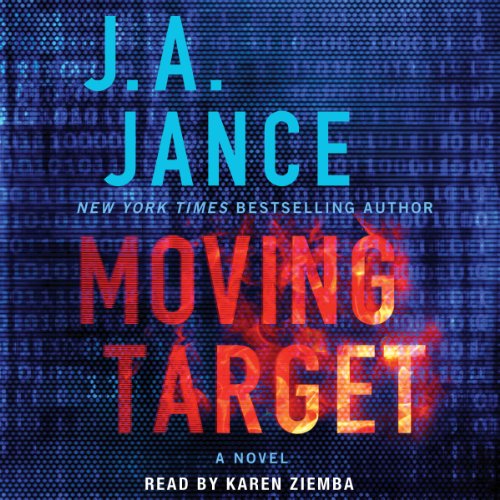 In this high-stakes thriller from New York Times bestselling author J.A. Jance, Ali Reynolds spans continents to solve a cold case murder and to figure out who wants a young juvenile offender dead.

Lance Tucker, an incarcerated juvenile offender and talented hacker in his own right, is set on fire one night and severely burned while hanging Christmas decorations in a lockup rec room. B. Simpson, Ali Reynolds's fiance and the man who helped put Lance in jail, feels obliged to get to the bottom of what happened. With Ali off in England to help Leland Brooks at a reunion with his long-estranged family, B. turns to someone else to help out - Ali's good friend and Taser-carrying nun, Sister Anselm.

Meanwhile, in Bournemouth - Leland's hometown - Ali begins to investigate the decades-old murder of Leland's father, which Leland himself was once suspected of committing. With unsolved murders on both sides of the Atlantic, Ali, B., and Sister Anselm are united by their search for answers - and the jeopardy they get into as a result.

From the author praised for her "inimitable, take-no-prisoners style" (Kirkus Reviews), Moving Target sends Ali on a trans-Atlantic adventure and straight into the path of a deadly killer.

What listeners say about Moving Target

It's been 5 years since I read her "Taking the Fifth," which I panned. I somehow decided to give her another chance with a different protagonist with a mystery dealing with cyberspace. I'm sorry to say that I was right the first time--Unbelievable plot and silly prose, reminded me of fiction in Reader's Digest as opposed to, say, The New Yorker. At some points, I had the feeling this might have been written for a young adult audience, which might explain why the author felt she needed to spell everything out in elaborate detail and explain things more than once. Even then, I think it was lacking. Were it not for the narrator, I probably would not have finished. Despite her great ratings and popularity, I won't be reading any more from J.A. Jance.

What did you love best about Moving Target?

I thoroughly enjoyed listening to the ongoing story of Ali Reynolds and her wonderful aide Leland Brooks. The story line was exciting as was the second underlying story relating to Leland.

Loved the narrator's performance - though I am not sure if it was my aging ipod but the cut and joining of narration is at times annoying.

If you love Jance you'll love this next Ali Reynolds Mystery. Thanks J. A. Jance.

a cold case and a new case

I read somewhere that this is J. A. Jance’s 50th book. I believe this is the 9th book in the Ali Reynolds series. This book has two complicated mysteries one in England and one in Texas. Ali and Leland are in England to meet his family and B Simpson is in Texas looking into the ‘accident” of a young teenage computer hacker that his company had caught on behalf of their client the school district. Jance does a good job with developing the characters and the story details; it was no problem juggling the two mysteries in my mind while reading. The story has lots of technology and internet intrigue which sort of gives a warning about the security of your information on the net. I noted that Jance had the DNA scientist in the story been denied admittance to Oxford because she was a woman. The character goes to the USA to University and comes back to take over her Uncles DNA lab next to Oxford and only hires women. I had read that Jance was denied admission to the University of Arizona’s creative writing program because she was a woman. Women have made some progressed on the road to equality. Looks like this book is setting up for the next one to have Ali’s and B’s wedding. Karen Ziemba does a good job narrating the story.

J.A. Jance's Ali Reynolds novels are hard to put down. I move the i-Pod speakers into the kitchen to do dishes and clean up as I listen. It's amazing how painless a distasteful chore becomes when you're listening to a good book.

I am throughly enjoying this series and look foward to each new book. thanking Jance for sharing her awesome gift for me to ponder and enjoy...Donna Coy

Another great story and loved characters

This story was pretty good yet very tragic. Will get at your raw emotions. I actually teared up in a couple of places. Don't want to say much as it may spoil for others.

Fast moving with a duel mystery, the story narrated expertly by Karen Ziemba brings together a tragic story from the past with a heartfelt story of modern computer cyber world. Don't press enter unless you are prepared for hours of delightful intrigue.

Where does Moving Target rank among all the audiobooks you’ve listened to so far?

SOMEWHERE IN THE MIDDLE

What other book might you compare Moving Target to and why?

I COULD COMPARE IT TO OTHER J.A. JANCE BOOKS I.E. THE BEAUMONT MYSTERIES. IT WOULD NOT COMPARE FAVORABLY.

HER PERFORMANCE WAS OKAY - COULDN'T GET PAST THE "ENGLISH" ACCENT.

SOLVING A CRIME OVER THE INTERNET.