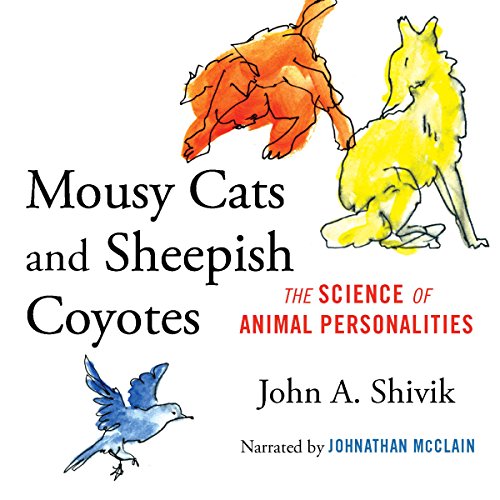 The Science of Animal Personalities
By: John A. Shivik
Narrated by: Johnathan McClain
Length: 7 hrs and 21 mins
Categories: Non-fiction, Biology
4 out of 5 stars 4.0 (2 ratings)

By: John A. Shivik
Narrated by: Johnathan McClain

A wildlife expert explores what science tells us about animals as unique individuals and why animal personality matters for the human-animal bond and for adaptation in nature.

Why are some cats cuddly and others standoffish? Why are some dogs adventuresome, others homebodies? As any pet owner can attest, we feel that the animals we've formed bonds with are unique, as particular (and peculiar) as any human friend or loved one.

Recent years have brought an increased understanding of animal intelligence and emotion. But is there a scientific basis for animal personality and individuality, or is this notion purely sentimental? It turns out that science has been reluctant to even broach the subject of individuality until recently. But now, a fundamental shift in scientific understanding is underway, as mainstream scientists begin to accept the idea that animals of all kinds - from beloved beasts like apes and birds to decidedly less cuddly creatures like crabs and spiders - do indeed have individual personalities.

In Mousy Cats and Sheepish Coyotes, veteran wildlife expert Dr. John A. Shivik brings us stories from the front lines of this exciting new discipline. Drawing on his scientific training as well as his storytelling gifts, Shivik serves as an accessible, humorous guide to the emerging body of research on animal personalities. Shivik accompanies researchers who are discovering that each wolf, bear, and coyote has an inherent tendency either to favor its aggressive nature or to shyly avoid conflicts. Some bluebirds are lovers, others are fighters. And some spiders prefer to be loners while others are sociable. Unique personalities can be discovered in every corner of the animal kingdom - even among microscopic organisms. The array of personality types among all species is only beginning to be described and understood.

As Shivik argues, animals' unique personalities are important not only because they determine which animals we bond with. Individual animal traits are also fundamental but still inadequately understood drivers of evolution, adaptation, and species diversity. Ultimately, Mousy Cats and Sheepish Coyotes offers insight into the similarities humans share with animals and presents evidence of an unbroken biological connection from the smallest organisms to Homo sapiens.

“A fascinating, accessible, and well-documented work that will be enjoyed by those interested in animal behavior and anyone who has ever had a pet with personality to spare.” (Library Journal)

“Anyone who’s had the pleasure (or not) of spending time with other animals, ranging from insects to reptiles to fish to birds to big-brained mammals, knows they’re unique individuals with a wide variety of personalities. In this important book, Dr. John Shivik combines cutting-edge science with wonderful stories and shows that a wide variety of nonhumans are neither mindless nor all the same. Rather, they’re fascinating beings who can be timid, bold, shy, outgoing, and, on occasion, downright obnoxious. And it’s their unique personalities that bond us to them, because in so many ways they display the same range of personalities as do we.” (Marc Bekoff, author of The Animals’ Agenda)

Great “listen” it got a little too “emotional” towards the end.

I loved how it started out and most of the listen was fantastic. For me, I wanted it to be more scientific and a bit less of anecdotal... it becomes mostly stories the last few chapters, with a touch of science.

Overall I recommend it to all the animal and non-animal lover.

If you've ever had a conversation with an animal, this book is a good addition to your library. Shivik writes warmly and accessibly about science, taking us through the thinking, past and present. McClain makes this an easy listen, engaging to the end. I liked this book immensely. #thoughtprovoking #engaging #tagsgiving #sweepstakes