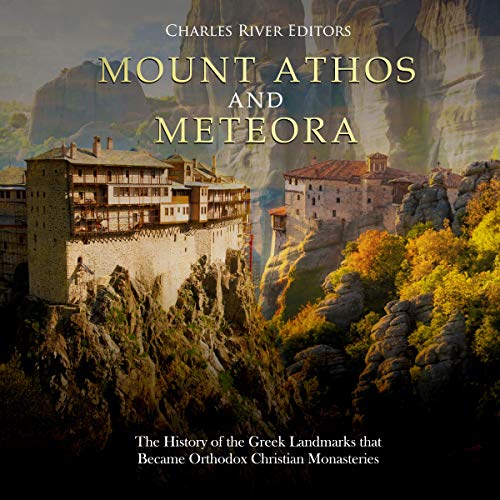 Mount Athos and Meteora: The History of the Greek Landmarks That Became Orthodox Christian Monasteries

Mount Athos and Meteora: The History of the Greek Landmarks That Became Orthodox Christian Monasteries

The sleepy paradise of Mount Athos is often extolled as the most peaceful and private corner of Greece, if not all of Europe. Mount Athos is the easternmost finger of the Halkidiki peninsula - a mountainous sliver of land that stretches about 37.3 miles long with a surface area of about 150 square miles. Towering over the tightly packed chestnut forests and the blue, crystalline waters of the Aegean Sea at a height of 6,670 feet is the snow-dusted crest of the mighty mountain itself.

Known to the locals as Agion Oros, or the “Holy Mountain”, the peninsula today is most famed for its exclusivity, a place that continues to bar all women and their daughters from entry. The fortress-like monasteries scattered among the slopes and the clusters of cells clinging to the cliffs are occupied by monks of the Eastern Orthodox Church. Of course, its male-only population is just one aspect of the peninsula's anomalous nature.

Planted on the peninsula's coast is a black Byzantine Cross, a flat, cross-shaped monument with a trinity of flared, wide-armed Greek crosses in place of its arms and a traditional Christian cross in its center, kissed with rust. It serves as an emblem of the monastic society that resides there, and it delineates the boundary between Mount Athos and the rest of Greece. Entering this hallowed peninsula is like setting foot into a living time capsule because life here has not changed in well over 1,000 years. Mount Athos is one of only two places on earth (the other being the Mar Saba) that chooses to run on “Byzantine time”, meaning hour 0:00:00 only begins at sundown. Moreover, it is the only territory in the world that flies the Byzantine flag.

Close to 1,850 miles to the west of Babylon, a group of mere mortals set out on a daring but seemingly fragile quest to build their homes in a place that - at the very least - symbolically neighbored the Kingdom of God. Evidently, these mortals had earned the Lord's blessings, for there, a smattering of their descendants remain to this day. Contrary to the builders of Babel, these God-fearing venturers constructed these dwellings with the purpose of wholly devoting their lives to the Lord. More admirable yet, these dwellings were not lofty towers that took dozens of years to assemble, nor were they built atop solid ground; instead, they ranged from small huts to compact complexes perilously perched atop and embedded into the nooks and fissures of stone mountains. This forest of jagged stone pillar, which looms over gorgeous valleys and a lush, densely forested stretch of land, is none other than Meteora, situated in the quaint town of Kalabaka in the Northwestern part of Thessaly, Greece.

Mount Athos and Meteora: The History of the Greek Landmarks That Became Orthodox Christian Monasteries looks at the unique regions and what life has been like there since ancient times. You will learn about Meteora and Mount Athos like never before.

Well written and full of interesting facts, I believe I have a good basic understanding of these holy dwellings and the men (and women) who occupy them.