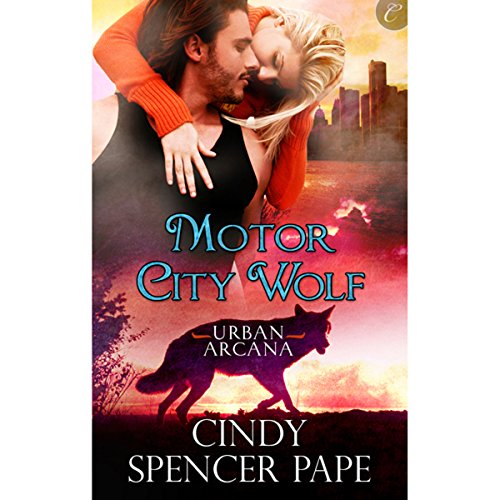 By: Cindy Spencer Pape
Narrated by: Julie Francis
Try for £0.00

Less than a year ago, Fianna Meadows was a pampered noble in the Faerie court. Then she was exiled, turned mortal and forced to work for a living - in a werewolf bar in Detroit, no less! Still, Fianna has to admit her new life isn't so bad…particularly when it comes to Greg Novak, the bar's sexy owner.

For Greg, keeping his hands off Fianna has been a challenge. But his sense of honor won't let him get involved with a woman put in his care, even if Fianna is eager to explore her new feelings of lust. Resisting the temptation to claim her gets even harder when Greg's grandfather, the region's Alpha, orders him to marry and Fianna agrees to pretend to be his chosen mate.

Fighting his attraction to Fianna isn't Greg's only problem. Someone is killing werewolves and attacking other paranormal beings in Detroit. He vows to do whatever it takes protect both his pack and Fianna - even if that means giving her up….

If a character is going to overcome the racism they were steeped in their whole lives, they should be shown to do work to overcome it. Even in a Harelquin Romance. Do like the idea of redemption. There were a few plot points way too reliant on people not raising alarm. Generally a relaxing listen just not the best of this series.

What disappointed you about Motor City Wolf?

This reader pronounces every name wrong along with the city names. It was so annoying I almost returned it.

What other book might you compare Motor City Wolf to and why?

The other books in the Motor City Urban Arcane series. They are all similar in plot, but you get so invested in the characters that you just don't care.

Meghan is not pronounced Meegan. Clarice is not pronounced Aris, Fiona is not pronounced Fi-ONa, Alarick is not Allrick, and Jace is not Joss. Every character has also been given a British accent except for Jace who is from Jamaica, who now has such a pronounced accent that you can't understand his dialogue. I seriously considered returning this audiobook because the reader annoyed me so much. It is the third in the series and the characters were established by the first two readings, so why didn't this woman do a little research is she had questions about the pronunciations.

If you could play editor, what scene or scenes would you have cut from Motor City Wolf?

The book it's self is fine, I love Cindy Spencer Pape's books.

I am a bit confused why the other 3 books in the series are whisper synced yet this one isn't and it's in the middle of the series. It really makes no sense.

I have been eagerly awaiting this story!!! I just knew Fi and Greg would be a smexy pair!! This series really is very entertaining, and the intrigue gets deeper with each new book.

I was so happy to see Fianna grow since the first book. You really get more of her back story here and understand a bit more why she helped her family. She had a major turn in the last book and this takes her even further. She has really developed into a character who is easy to love.

Greg is a yummy growly Alpha wolf!! He is seriously delicious! When he decides to make his move with Fi, he is sure and swift. I love the way he stands by his woman.

The steam is wickedly delicious as always! Plenty of variety, loads of foreplay and hot as Hades!! This series really knows how to get a gal's engine revved!

The story this time was a touch predictable, but no less enjoyable. The pace was terrific, steady action throughout. It was a quick read that I did not want to end. Great mixed narrative, you get both leads character's POV and that makes a world of difference. This style is a favorite of mine, it makes the story so much more fulfilling.

The narrator, Julie Francis, dos a fantastic job with all the voices. She has a real flare for subtle changes in tone that make all her characterizations distinct. Her sensual tone really helps build the steamy scenes.

Can't wait for the next book! I am sure Lana and Des are going to get it on!!

Would you try another book from Cindy Spencer Pape and/or Julie Francis?

What could Cindy Spencer Pape have done to make this a more enjoyable book for you?

The story was not that bad, it's just that there is a lot better in this genre.

Did Julie Francis do a good job differentiating all the characters? How?

I felt the narrator did a good job, there were a lot of characters and occasionally I had a hard time differentiating them.

Would you try another book from Cindy Spencer Pape and/or Julie Francis?

I would have to think it over a time or two before I tried another book by this author,

Has Motor City Wolf turned you off from other books in this genre?

This book was really slow and didn't really develop the main characters so they could be used in subsequent stories.

Did Motor City Wolf inspire you to do anything?