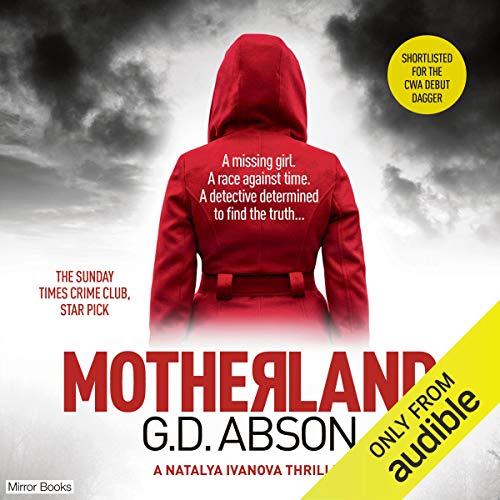 The first in a gripping series of crime novels set in the seamier side of St Petersburg, featuring sharp, yet compromised policewoman, Captain Natalya Ivanova.

Student Zena Dahl, the daughter of a Swedish millionaire, has gone missing in St Petersburg (or Piter as the city is colloquially known) after a night out with a friend.

Captain Natalya Ivanova is assigned the case, making a change for Natalya from her usual fare of domestic violence work, but, because of the family’s wealth, there’s pressure for a quick result. As she investigates she discovers that the case is not as straightforward as it may seem.

Dark, violent and insightful, Motherland twists and turns to a satisfyingly dramatic conclusion.

What listeners say about Motherland

Corruption and kidnap in Putin’s Russia. An interesting look at the early days of Putin when Russia had been through the worst days of the post-Soviet chaos but when it was becoming clear that it was no western democracy. This forms the backdrop to a not unheard of tale of police trying to stay honest in a dishonest world. It’s done with skill and flair.

The narrator adds to the storyline with authentic sounding charchters. Plenty of momentum, good listen x

Such a great story about the Motherland Russia.The narrator was just amazing.It was an enjoyable read.

I could not listen to this more than the first 15 minutes or so. Clare Corbett has a pleasant voice and is a fluent narrator but she is probably not a Russian speaker. Yet I assume the publisher asked her to put on a Russian accent when reading characters' speech, and the result is cringeworthy (e.g. Corbett adds random letters to names she otherwise can't get her tongue around). The story is set in Russia and its characters are Russian, so no reminder needed. Their speech in this English language edition is not Russian, naturally, and neither are the writer nor the narrator! So why the constant fake Russian accent? It merely introduces a pretentiousness that destroys atmosphere rather than adding to it.