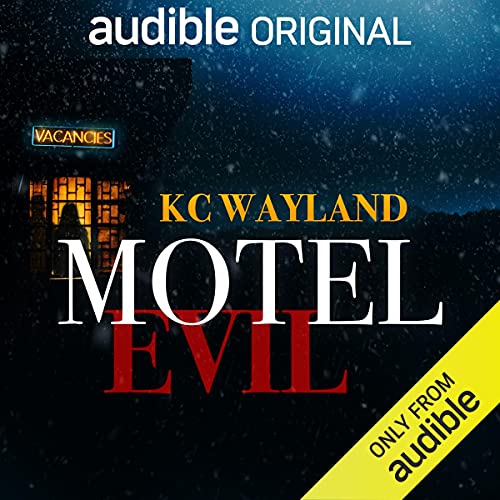 What listeners say about Motel Evil

Unlike some of the Original podcasts, the episodes were a good length allowing you to really get into the story. The performances and the atmosphere created was really enjoyable. The only downside was the end which was a bit 'meh' but getting there was good fun and I'd give it another listen at some point.

Over all i did enjoy the storyline.
Good array of characters and build up to the final episode.

Enjoyed the book. Would read another by this author.
Good mix of characters. Not the usual cast .

Probably the worst audio book I have ever listened to.
Plot was stupid.
Acting was cringeworthy.
The conversations were so so clunky

the gaps between people speaking is so bad, and the acting is really bad I'm afraid. couldn't bare more than 10 minutes

Gripped me right from the off loved the story line loads to think about and guess at. Great listen loved to hear more from KC Wayland

I hope you're going to make more I loved these, kc wayland audio book awesome

I was listening to this until a plot jump and realised 5 was missing.
Incredibly frustrating.

A really well set up, but slightly flawed, mystery

There was the potential for a lot of atmosphere and energy to this series but it feels as if it wasn't quite realised some strange and sound mixing decisions. The set up is great buta you really need the characters to feel locked in, desparate and paranoid but it doesn't quite pull you in because the sound and music is so withdrawn, almost hidden under the dialogue.

This a great whodunnit otherwise, though there are too many flashback sequences in the early episodes which gets a little confusing unless your paying attention...

I listen to a heck of a lot of audio dramas and for what it's worth, this production is one of the very best in my humble opinion. From the amazing voice acting to the well written dialogue, it's an atmospheric treat for the ears.

Murder mystery , mixed with suspense and unexpected twists. I find it hard to compare with anything, because as usual, KC delivers dialogue and storyline that I could easily put in it's own category. As a repeat listener , I would recommend Motel Evil as well as any Wayland Production to anyone and everyone who loves an amazing story and an even better story telling experience.

Love kc wayland! This story is amazing ! If you haven’t already listen to his We’re alive series ! You won’t regret it

KC Wayland is the master of cliffhangers. You just can't stop at one single chapter!
A classic 'Whodunit ' from the creator of "We're Alive" . KC's attention to detail will have you listening over and over again.

Amazing storyline from Wayland Productions once again!!
Loved the mystery.
Will most likely listen again.

the man knows how to tell a story!

Again KC puts you in the middle of a great story and might as well give you an official name and part as you listen along. I even had to grab a blanket to fight off the cold! LOL

Another Kc Wayland masterpiece! If you like this then go listen to the We’re Alive series.

An amazingly done whodunit murder mystery. The Foley mixing is so good you feel like you are right there in the motel.

KC DOES IT AGAIN!!

My god once again KC Wayland does audio drama like no other! From the sound, to the actors and even to the subtle details LC literally never misses when it comes to stories. If you are fan of his hit series We’re Alive and the work he did on Bronzeville then you 100 percent are going to love this mini show! This maybe a mini show but there is nothing small about the production and quality of this work!

Kc Wayland can do no wrong when it comes to story and character building. I was hooked from the beginning. Can't wait for more to come.