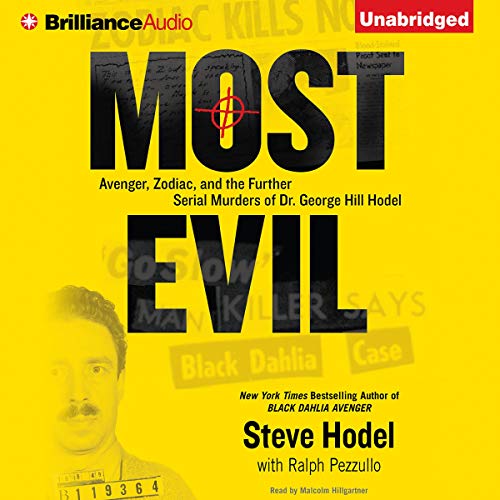 When veteran LAPD homicide detective Steve Hodel discovered that his own late father, Dr. George Hill Hodel, was the killer in the infamous Black Dahlia murder case, he wrote the best seller Black Dahlia Avenger, a book that convinced even the L.A. County Deputy District Attorney that George Hodel was responsible for Elizabeth Short's gruesome death.

As a veteran police investigator, Steve Hodel's instincts told him that if his father was capable of that level of cruelty, it probably didn't begin or end with the Black Dahlia. Steve Hodel has devoted his life to examining the evidence of his father's fascinating and mysterious life, and shocking new revelations that have come to light in the last five years are the subject of Most Evil.

If Steve Hodel's research is correct, Dr. George Hill Hodel was among the most prolific serial killers in history, beginning as a young man and continuing to kill throughout his long life of 91 years. Among his crimes are dozens of unsolved murder cases stretching back 60 years.

Most Evil compiles an astonishing amount of never-before-seen visual, circumstantial, and forensic evidence to prove Hodel's case. This relentless, compelling, and persuasive investigation will revolutionize the way we think about some of the most intriguing, brutal, unsolved, and previously unconnected murders in American history - and it may change our understanding of serial killers altogether.

What listeners say about Most Evil

This book is entirely unfathomable on audio as it refers often to pictures and drawings that are unavailable on audio. Additionally the Kindle version is not available as a companion. There should be a warning before purchasing that this is the case. Can't finish which is a shame because the topic is fascinating. And can't afford to re-purchase as kindle or paper version.

This is a compelling book, but needs tweaked for audio. As other reviewers have noted, Hodel constantly refers to pictures and figures that are not available in the audiobook. The audiobook either needs to remove those references, or a companion document needs to be available. It somewhat impacted my enjoyment, not having that.

The narrator is great.

a difficult listen at times mainly due to the references to evidence not included in the text (a pdf download would be most useful, almost necessary) but otherwise very engaging and concise, thought provoking and worth the download

If you could sum up Most Evil in three words, what would they be?

What was one of the most memorable moments of Most Evil?

Linking with other murders which almost convinces me....but I have questions.

What does Malcolm Hillgartner bring to the story that you wouldn’t experience if you had only read the book?

Im not really a reader, makes me fall asleep. I listen to books as i do my job which is on computers.

Most awful, hideous, sad, account of a life rubbed out by a genius who did not live in this world.

Another "Dad is the killer" investigation by Steve Hodel. I didn't dislike this book, but I didn't find it as intriguing as his first book regarding his father as the killer of Elizabeth Short (the Black Dahlia). I think the reason behind that is that much of the information background information is repeated in this book. Steve Hodel also has a tendency of telling you of an event in detail, and when referencing said event, will once again re-describe the entire event. It just seems to drag on a bit in those instances. As I said, not a bad read, not a great read, just a good interesting theory on unsolved crimes.

This author references pictures, graphs, maps and other illustrations to complement his book none of these are attached to the audible book leaving the listener at a disadvantage to the reader of a true book.

a compelling co tinuation of the BDA. if you dont believe George Hodell was evil incarnate, you will after reading this.

I love true crime and have followed a lot of diff theories for these cases and this just seemed like a massive stretch. His dad was def the Black Dahlia killer but the other ones seemed more circumstantial. It was interesting but I don’t know if I buy it.

I like the Black Dahlia theory. The zodiac theory is weeeaaaakkkk. it's still a good read... errrr... listen

I love Steve Hodell but...

I love all of his books except this one. This is just a rehash with other info thrown in, basically just read his first book, no need for this one it’s a huge disappointment but like I said his other books are fantastic just skip this one

I have read Waiting to darken by Founa Hodel, and read this book as a follow up. Both books are worth the read

Well written and concise! Amazing story. Authors evidence laid out beautifully. This writer has convinced me.

Really sounded like an interesting topic and probably would have been if condensed into much less but the repetitive chapters and info left me feeling like i was sitting in a congressional hearing...skip the book, read wikipedia about it instead