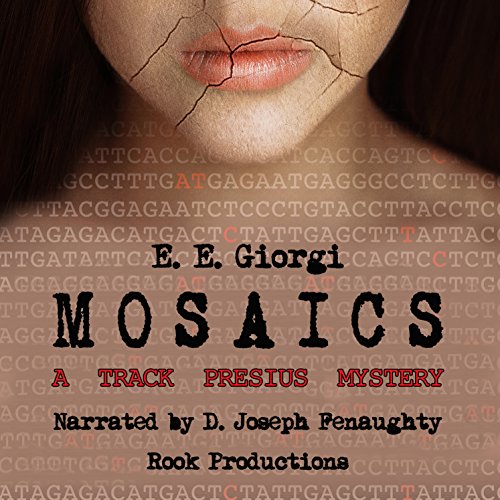 From the award-winning author of Chimeras

The line between hunter and hunted is about to blur.

Dubbed the Byzantine Strangler because of the mysterious mosaic tiles he leaves at the crime scene, a new serial killer is stalking the streets of Los Angeles. Racing to decipher the code encrypted in the tiles before the killer strikes again, Detective Track Presius faces a new challenge: the "awakened" genes that make his vision and olfactory sense so sharp are now taking a toll on his life. When a new set of tiles appears in his own backyard, Track makes a chilling realization: those very same genes that are threatening his life are drawing the Byzantine Strangler closer and closer. The line between hunter and hunted has suddenly blurred. Will Track be the next piece of the mosaic puzzle?

Track Presius. The plot is fast paced, unusual and intriguing, the murders gruesome and bizarre. But the strangest of all is the main detective, a man named Presius, who investigates not so much by looking for clues as, literally, sniffing them out. What a joy! A truly visceral engagement leaps out to the reader as he roots through the crime scenes absorbing the smells, inhaling the evidence.

The slow presentation is easily solved by simply bumping up the speed by one notch which in no way diminishes Mr. Fenaughty's fine voice. But his reading is far more difficult to overcome. His is a very strange performance. All of the conversation is perfectly executed but the text in between is dire as if reading comes hard to him and this is his first sight of the book. His voice cracks, he sometimes stumbles over words and, just occasionally, mispronounces them. But the worst part is his phrasing, constantly stopping at inappropriate points of the sentence, for example, "the dull and grey colour (PAUSE) of the walls..." or "Parker (PAUSE) Centre".. If this was happening only rarely it wouldn't matter but it is so frequent that it completely distracted me from the storyline and I had to pull my mind away from the oddity of his narration to return to Presius's world.

Did Mosaics: A Thriller inspire you to do anything?

E.E.Giorgi is a masterful storyteller. It says much about Mosaics that I was so involved with the story and intent on following it through, that I continued to the end despite my irritation with the narrator. I highly recommend this book but get the written version not the audio unless you are looking for a really difficult and quirky listen.

I received this book as a aift. Thank you.

What made the experience of listening to Mosaics: A Thriller the most enjoyable?

Once again, E.E. Giorgi wrote a complicated and thrilling thriller. I generally don't read mysteries since they don't focus that much on character, but E.E. really has created a complex character in Track Presius. Every time I started to think that I knew where things were going, they took another path, so there was tension until the end. I like her books because she includes thought-provoking ideas about genetics. The only thing I would have liked more of, is more about Track's genetics and how they are affecting him and driving him here....

Have you listened to any of D. Joseph Fenaughty’s other performances before? How does this one compare?

D. Joseph Fenaughty is a perfect narrator for this series: he really creates a perfect noirish cop's voice!

No extreme reactions... I just would like how the action would take all these new twists that I couldn't predict...

a who-done-it with not enough info

A series of brutal murders drags detective Track Presius back from a prolonged sabbatical.  The killer leaves strange and subtle clues, like colored mosaic tiles at the scene.  But there are inconsistencies to the crimes, things that don’t add up.  Presius follows the winding trail as the bodies pile up, victims and investigators alike.  Until even Presius is being stalked and investigated.  Nothing is as it seems, and everyone is a suspect, even Presius.

Mosiacs is a who-done-it with not enough information for the listener to potentially figure out the story for him or herself.  There are leaps in discovery that sometimes seem strange and out of place to the plot.   Presius is just too lucky sometimes, incredibly unlucky at other times.  This is not a deal breaker, many listeners of detective and mystery novels, simply enjoy the ride, letting the author lay out the story for you.  The novel is violent, but the violence (and there is plenty of it) seems cartoonish and gratuitous, though not particularly shocking considering the means by which the victims were murdered.

The story is performed by D Joseph Fenaughty who does a passable job.  His staccato delivery creates the necessary dark mood, but sometimes drags his sentences too long for comfort.  It is recommended you listen to a sample to see if his style is right for you.

If you like murder mysteries, you may enjoy the cat and mouse game.  Persius is an interesting character, with a gene mutation that gives him an extreme sense of smell and brilliant intuition.  He is reckless and impulsive, getting himself in out of impossible situations.  There is also a compelling love story that weaves through the mystery.  For others, the overloaded plot and distracting subplots may not be your cup of tea.  It is recommended you listen to a sample first.

Audiobook was purchased for review by the author.