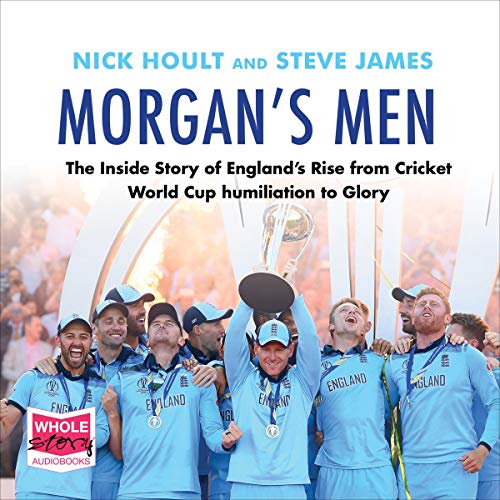 By: Nick Hoult,Steve James
Narrated by: Andy Cresswell
Try for £0.00

Morgan's Men reveals how the team became the most aggressive limited-overs side in the world, led by their inspirational captain, Eoin Morgan, whose vision and determination to succeed captured the imagination of the nation.

Hoult and James follow England's journey from Bangladesh to Barbados, from Melbourne to Manchester, to present the inside story of the team's rebirth. They tell us how players dealt with the Ben Stokes court case, the sacking of Alex Hales for a drugs ban, and reveal the innovative new strategies and tactics that helped them become the best in the world, culminating in a World Cup final that was arguably the greatest one-day match of all time.

What listeners say about Morgan's Men

Out of order, with a mixed narrative

The first chapter, recalling the World Cup final up to the Super Over, is thrilling. When that finishes and we are taken back to the previous World Cup, I was excited for the rest of the book. But then...it’s a bit odd.

It skips back and forward, recalling the same incidents multiple times. We hear about the World T20 defeat more than once. Anderson and Broad being discarded more than once. Stokes’ court case is near the front, rather than the back. It’s all out of order, with no particular drive to the narrative.

People will know how the Super Over ends - but the first time it’s mentioned here is rather randomly in a throwaway line about a university study during chapter four (labelled chapter five). That’s supposed to be the end of the book.

Rather than telling a cohesive story from 2015 to 2019, it jumps around for no clear reason.

The book does settle once the tournament begins. Each England match gets its own chapter, with a player generally receiving individual focus. This part of the book is a vast improvement, although there are still jarring jumps forward at times.

As for the narration, the Irish, Australian and New Zealand accent attempts are unwise, although it’s broadly OK other than that. Someone should’ve pointed out in the read that Carlos Brathwaite isn’t pronounced “Braithwaite”. Because of the rollercoaster timeline, he pops up a few times. Not sure Ricky Ponting is commonly called “Rick” either.

This could have been really exceptional - and all the components are hidden away within the text - but it falls flat because of a lack of discipline in the telling of the story. It’s all a bit of a shame.

Why do the accents? Why!?

The content material is fantastic. The progression from laughing stock of the game to World Champions via one of the most thrilling games of cricket ever played.

But, oh dear. The narration is shocking. Please don't try to do a cod-Irish accent when reading Eoin Morgan's comments or some sub-Aussie twang for Trevor Bayliss. I'm not sure where Ben Stokes is meant to be from in this but it's not anywhere identifiable. At times this makes the narration unintentionally hilarious.

I cannot help but feel that during lockdown (when this book was released and recorded) there was a whole host of cricket broadcasters available who would have done a far superior job of telling what is a fantastic tale.

The Narrator clearly doesn’t have the first clue about cricket, he can’t even pronounce most of the teams names correctly.
Clueless hammy theatre actors reads lines of a piece of paper...massive fail

Great story, shame about the narration

Great story, well written & researched by two excellent journalists; it’s just a shame that the narrator knows little about cricket, as illustrated by his flawed pronunciation of names & places throughout the book. As one (of many) examples, apparently there is now a place in Sri Lanka called GAL-LEE.

I was there in the pavilion as a MCC Full Member. It will live with me for the rest of my life

I needed to hear the story slowly and bring it to life again. Afterwards I was in the Long Room and touched Morgan’s Hand. Morgan is a wonderful Captain and manages men Perfectly.
I shall buy the book now too.