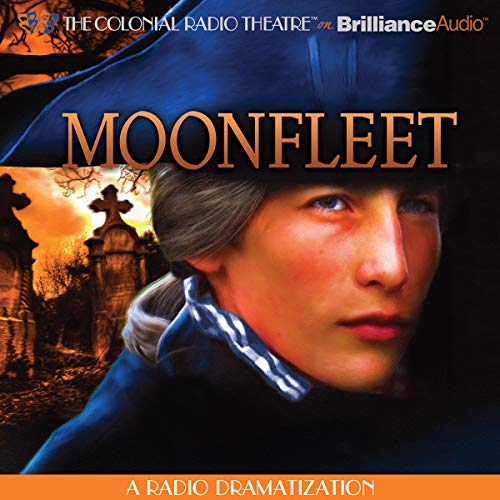 Orphaned John Trenchard grows up in the village of Moonfleet with his aunt, entranced by the local legend of the ghostly Blackbeard, who rises each winter night to search for his lost diamond. While conducting his own hunt for the treasure, John is trapped in the church crypt and discovers the true secret of the village: smuggling. Taken under the wing of the gruff innkeeper and chief smuggler, Elzevir Block, John begins a dangerous adventure which will see him in a hair-raising chase along a precarious cliff path and deciphering a hidden code in an ancient castle. Moonfleet is a thrilling story of revenge and betrayal, of loyalty and great sacrifice, but it is above all a story about friendship.

What listeners say about Moonfleet

The Colonial Radio Theatre is always worth a listen. A classic story, retold well. Thanks!

i loved every minute. it's a classic book

worth every penny. This is an inexpensive audio book and it's the best 4 pound I've ever spent. i really enjoyed the acting and the sound effects.

Revisiting this classroom classic after many years was a real treat

What was one of the most memorable moments of Moonfleet?

Some very unusual accents that definitely do not exist in the British Isles. So funny when Americans fail to do British! :)

Memorable performance by Colonial Radio Theatre Players. Memorable for all the wrong reasons!

It was a beautiful story, and actors outdid themselves with the embodiment of their characters. I'm glad I listened to this story; however, it's not one I would listen to often like some of the other Colonial Radio Theatre productions like Powder River, Beacon Hill, and Royall House. It is s great story for those who love treasure, pirates, and enduring friendships.

What made the experience of listening to Moonfleet the most enjoyable?

CRT's overall production and talented actors capture both character and story. And within a short time you as the listener are totally hooked. This is one fine production.

What other book might you compare Moonfleet to and why?

I'd compare this production to Kidnapped and Treasure Island from Robert Louis Stevenson or Fenimore Cooper's The Last of the Mohicans. King Solomon's Mines by Rider Haggard the tales of the Scarecrow/Dr. Syn from Russell Thorndyke come to mind also. Each of these fine works are also available from the Colonial Radio Theater in one form or another. Fine listening and well worth the money.

Listening to Jerry Robbins and the Colonial Radio Theater is top notch. I've listened to a dozen or more radio productions from CRT and I've never heard a bad show. A few shows are available from their website for free just to try.

Value is in the eye of the beholder.

Good way to test one's liking for the book

This isn't a story I especially enjoyed. The performance was decent though. I am aware the book differs somewhat from the drama but the drama shows me I wouldn't like the book.