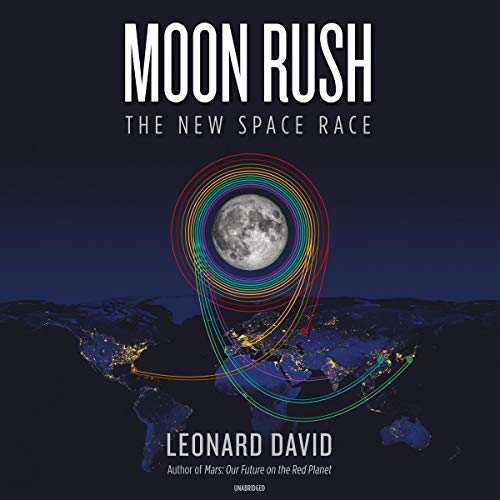 A veteran space journalist digs into the science and technology - past, present, and future - central to our explorations of Earth's only satellite, the space destination most hotly pursued today.

In this rich audiobook, veteran science journalist Leonard David explores the moon in all its facets, from ancient myth to future "Moon Village" plans. David offers inside information about how the United States, allies, and competitors, as well as key private corporations like Moon Express and Jeff Bezos's Blue Origin, plan to reach, inhabit, and even harvest the moon in the decades to come.

Spurred on by the Google Lunar XPRIZE - $30 million for the first to get to the moon and send images home - the 21st-century space race back to the moon has become more urgent, and more timely, than ever. Accounts of these new strategies are set against past efforts, including stories never before told about the Apollo missions and Cold War plans for military surveillance and missile launches from the moon. Timely and fascinating, this book sheds new light on our constant lunar companion, offering reasons to gaze up and see it in a different way than ever before.

A very good yet brief overview of lunar exploration in all its facets, including history, future possibilities, actors (public and private, etc), science and technology. Also has thoughts on the normative approaches to re-engaging with the Moon.

If you're looking for a book with a lot of facts to write a report, then this might be good. Apart from that purpose, I found it a bit dry (both in narration and narrative). The tone is comparable to a public high school history textbook. Though, Dan read it in such a way that it did have that kind of NatGeo epicness voice (minus the background music). I read along with the print copy and noticed almost every chapter had a word read differently. This may only be a big deal in one part where the number of months was off by two months. Those listening will also miss the image sections in the book that help recap the text. Overall, I am grateful to have an Audible version available, but its storytelling (i.e. plot) was dry. I know it's non fiction, but plot isn't exclusive to fiction.